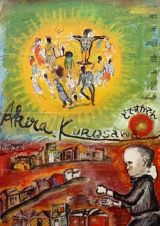 After a couple of months with films not directed by Kurosawa, our film club now returns to some more regular programming with Kurosawa’s 1970 feature Dodesukaden.

Like Sanjuro and Red Beard before it, Dodesukaden is based on a literary work by Shugoro Yamamoto. This time the source is the short story collection A Town Without Seasons, which has unfortunately not been translated into English.

It was also not the last time that Kurosawa would be basing a screenplay on Yamamoto, as the first two posthumous Kurosawa films, Ame agaru (1999) and The Sea Is Watching (2002), were both filmed from screenplays that Kurosawa had based on Yamamoto’s work. Similarly, Kon Ichikawa’s 2000 film Dora-heita, co-written by Kurosawa and our film club title next month, was also based on a Yamamoto story. The film was in fact written around the same time as the screenplay for Dodesukaden, and it will be interesting to compare the two works, even if the writing teams were different, with Kurosawa the only shared member.

While we could then say that Kurosawa was on fairly familiar ground with the film’s source material, much of the rest of the film’s production was new and challenging. Dodesukaden was Kurosawa’s first film in colour, as well as his first completed film without Toshiro Mifune in almost 20 years. The budget was significantly smaller than with his recent projects, especially the aborted Hollywood ones, and the two-month shooting schedule shorter than what had been spent with his previous films, including the almost two-year project Red Beard.

There was also a sense of going back. The film is often compared with The Lower Depths (see for instance Goodwin, 218), while the episodic narrative style employed is similar to that of Red Beard. After more than ten years of widescreen films, Kurosawa also returned to the non-widescreen aspect ratio, apparently partly in order to heighten the intimacy of the shanty-town setting as well as to better work with the colours. (Galbraith, 478)

Dodesukaden was also Kurosawa’s first completed film in five years, the longest that he had up until that point taken between finished films in his career. Not that he hadn’t been busy of course, first preparing the aborted Runaway Train, and then taking over the Japanese part of the mammoth Tora! Tora! Tora! production, with unfortunate consequences. As both projects had failed to materialise, the director had been left with strained ties with both foreign and Japanese film studios.

This, combined with a rapid shift in the Japanese film industry towards cheaper television productions, drove Kurosawa, Ichikawa, Masaki Kobayashi and Keisuke Kinoshita to form their own production company, Club of the Four Knights. Dodesukaden was their first production (Dora-heita had been deemed too expensive), and it was made with the intention of paving the way for a string of other high quality domestic cinema that would rejuvenate the Japanese film industry. This was not to happen, however. Dodesukaden failed at the box office, and was unable to make back the around $300,000 that it had cost to produce. As Galbraith suggests, this was an especially difficult pill for Kurosawa to swallow, as the film had not only cost far less than his typical projects, but had also been finished ahead of schedule and under budget (485). Club of the Four Knights would never make another film as a production company.

Despite its poor performance at the box office, the film gained a cautiously positive initial response from critics both in Japan and abroad. (Galbraith, 485-486) In the years since, the film has had both its defenders and attackers, and there appears to be very little critical consensus about its place in the Kurosawa canon, making it one of the most contested of Kurosawa’s films. Joan Mellen in her essay on Dodesukaden for Richie’s The Films of Akira Kurosawa writes off the work as a “minor film that compares with Kurosawa’s great works only as a shadow resembles substance.” (Richie, 184) And as if there was nothing of interest to say about the film, the recent Criterion edition was also, untypically of Criterion’s Kurosawa DVDs, released without a commentary track. Yet, at the other end of the spectrum, David Desser in an essay for Post Script (vol. 20, fall 2000) sees Dodesukaden‘s place “at the top of the list of Kurosawa’s greatest films, virtually the equal of Ikiru, Seven Samurai, Yojimbo and High and Low, and in most ways superior to scholarly favourites like Rashomon and Throne of Blood.” (69) And then there is everything in between.

Which is of course good, for at least there has been discussion. A fair amount of it, in fact, and for a relatively wide range of topics. As Kurosawa’s first colour film, the use of colour is much discussed. So is the type(s) of narration, and Kurosawa’s method of putting together largely unconnected stories into a fairly coherent whole. While some do dismiss the film as one without a central story, others praise it for its multiple layers. Yoshimoto sees Dodesukaden as a very personal film, indeed almost autobiographical for Kurosawa, while others have considered it more alien and noted that they fail to find the Kurosawa that they know in the work.

What do you think? The forums are open.

As it turns out, I commented on Dodesukaden last time around on the second page of this thread. Other discussions can be found here, here, and here.

I liked it better and enjoyed it more on second viewing, but it’s still diffuse and more a collection of stories and vignettes tied together because they occur in the same community. I also found some parts too slow, like the beginning — for me, the movie doesn’t really get going until Rokuchan (the performance of which I appreciated more this time around) begins his daily rounds. (And the music/noises he and his mother make at the beginning are loud and distracting.) There are other scenes that could have been cut or go on too long (some of the stuff with Tanba, the ragseller and his returning wife).

Despite the color’s garishness, I really appreciated the way he used color to identify which husband and wife combination belonged together. Anyone notice how the one wife’s top centered bull’s-eyes in an interesting spot? (She’s not the only character wearing outlandish outfits, either; hers just happens to be rather suggestive.) Or how this usage of color presages the clan colors and banners he uses to such good effect in Ran?

Not everyone’s outcome is terrible. At least Katsuko’s uncle ran away and she and the delivery boy came to a kind of accord. (What happened to the baby, though?) I thought the way her aunt recounted what had happened at the police station was chilling and effective, though her controlled reaction is not one I’d find it easy to maintain. The uncle was played to perfection, and the scene where he’s about to rape her is chillingly effective, including the initial shot exposing the sensuousness (at least from his point of view) of the position she’s in when she falls over her work, asleep.

I also found the scenes with Shima and Ryotaro moving, and I appreciated the husband swappers and their solution to boredom and irritation with their spouses. In fact, there’s a lot to admire about how forthright yet delicate this movie is about topics that could easily be sensationalized. I even found the special effects used to show the gates and buildings the beggar father imagines impressive this time around. I even liked the writing better than I did before.

A great film? No, but a creditable one.

I think I’m with the disappointed ones with this film. I really struggle to get the core of the film – in all honesty if I hadn’t known it was a Kurosawa film, I would never have believed it after watching it. I have a real difficulty with the contrast of social realism and the abstract, expressionistic style – for me the two just don’t mix. The heightened acting style is also I think hard to take – while the deliberate use of theatrical flourishes works for me in the Lower Depths, it just doesn’t work for me here (I had the same problem with Madadayo). I also find that the blocking and editing is curiously clumsy at times.

The one thing it does have going for it is (I agree with Lawless here), it is admirably forthright about difficult topics, although again, I found the contrast between the social realism and the stylistic choices to be problematic – a particular example would be the penultimate scene with the niece and the delivery boy to be very strange – would he really be so casual with a girl who nearly stabbed him to death?