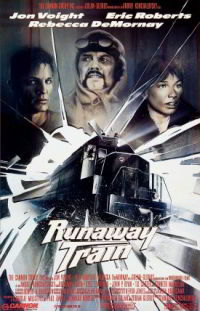 Choo choo! All aboard the Akira Kurosawa film club! Next stop Alaska. This train does not have a restaurant car.

Or a driver, for that matter!

And so begins our journey this March. We will be watching Andrei Konchalovsky‘s 1985 action thriller Runaway Train, which was based on a screenplay written in 1965 by Akira Kurosawa, Hideo Oguni and Ryuzo Kikushima. Most of the information that follows comes from Hiroshi Tasogawa’s book All the Emeperor’s Men.

While still working on Red Beard in early 1964, Kurosawa came across a magazine article about an incident with a runaway locomotive in the United States. The article, which Kurosawa encountered in Japanese in Bungei Shunju had originally appeared in the March 29, 1962 edition of the Life magazine under the title “The Runaway Train” and it can these days be read at Google Books.

The article had inspired Kurosawa, who planned to base his next film on the incident. By coincidence, Hedley Donovan, the then editor-in-chief at Life magazine’s publisher Time Inc., was in Japan in 1965 and, as an admirer of Kurosawa’s films, got in touch with the director to offer his help. With Donovan’s assistance, Kurosawa was able to acquire information which would otherwise have been impossible for him to get hold of, including confidential technical data on traffic control.

Donovan also managed to get Kurosawa in contact with the American producer Joseph E. Levine who became interested in making the film Kurosawa’s first outside of the Japanese studio system. Things moved with some speed and by summer 1966 Kurosawa, Oguni and Kikushima had come up with a script that had been translated into English, and on June 29, 1966 Kurosawa and Levine announced Runaway Train to the media in New York.

The film was to be shot in the US between October 1966 and February 1967 for a late 1967 release. It would be Kurosawa’s first film shot in colour, although the director had planned the colour palette to be predominantly dominated by black train engines and a white snow covered landscape. The script would be finalised by Sidney Carroll, an American screenwriter best known for The Hustler. Carroll’s task was to convert the dialogue into American vernacular and the structure into American production standards.

Runaway Train would therefore not be a small project, but Levine was already planning further, having talked with Kurosawa about collaborating on four further films after the release of Runaway Train. Things looked good. But problems began to soon emerge, and apparently not in the form of poor weather as is often mentioned in connection with the aborted Runaway Train production. In reality, there were issues much earlier than the shooting was to begin, and Kurosawa never actually even flew to the US for the shoot.

According to Tasogawa, the heart of the problems was that of cultural differences. Carroll, trying to shape the script into something that an American production crew would be familiar with and could make us of, tried to get Kurosawa to commit to details which Kurosawa, more accustomed to making final decisions on the day of the shoot, was not ready to decide. The matter dragged on, the shooting schedule was delayed, and in November 1966, only a month before the shoot was finally supposed to start, Kurosawa, physically exhausted by the process, requested that the entire production be moved a year later. This, he thought, would give everyone enough time to prepare and get over the language and culture barriers. Levine, despite having already contracted most of the 130 member crew, ultimately decided to cancel the production, rather than go with another director.

In spring 1967, there appears to still have been hope for Kurosawa’s Runaway Train, but Kurosawa’s own plans were also changing. By that point, Kurosawa had been contacted by Fox about the idea of him working on a Pearl Harbor film Tora! Tora! Tora!, and the large budget war epic would would take precedence over his plans for the locomotive action film. Still, had the Tora! Tora! Tora! project ended happily, Runaway Train might have followed. But as Kurosawa’s involvement with Tora! Tora! Tora! — which we will tackle in detail next month — ended in rather negative circumstances, Kurosawa never ended up making Runaway Train, or indeed working in Hollywood at all.

The Runaway Train script circulated in Hollywood for the next fifteen years with no producers ready to pick it. It was only in 1981 that it surfaced again when a Canadian-Japanese production was being planned with the Japanese film director Koreyoshi Kurahara to helm the production. This would never see the light of day either, but the script ended up with the Israeli producers The Cannon Group, best known for their low budget action films with actors like Chuck Norris and Jean-Claude Van Damme, but also for working with directors such as John Cassavetes and Norman Mailer. For Runaway Train, they approached the Russian born director Andrei Konchalovsky who ended up taking the project and was granted almost total artistic freedom. Before shooting the film, Konchalovsky sought and gained Kurosawa’s approval for the project, and his chosen directorial approach was very documentary like, bringing the audience into the middle of the fast paced action.

It is difficult to say how radically Konchalovsky’s version differs from that panned by Kurosawa, and while the original script is available in Japanese at the Akira Kurosawa Digital Archive (section 23.19.01), I have not been able to locate an English translation. More information about Konchalovsky’s production can however be found at Alaskarails.org.

According to Konchalovsky, the film was fairly poorly distributed, but it managed to become financially successful and ended up receiving fairly good reviews. Runaway Train even snatched two Academy Award nominations for its two leading actors, Jon Voight (Best Actor) and Eric Roberts (Best Supporting Actor), as well as one for Henry Richardson (Best Editing). Although none of them ended up carrying home an Oscar, Voight did win a Golden Globe for Best Actor (Drama).

We have discussed the film previously on a couple of occasions, and those discussion can be found under the Runaway Train tag. We have, however, yet to dig very deeply into the film. How, for instance, do you think that Kurosawa’s version would have differed from Konchalovsky’s film? How would a 1960s Hollywood action thriller have differed from a 1980s one? And of course, does Konchalovsky film still excite us in the 21st century?

For more background information about Kurosawa’s failed attempt to film Runaway Train, Hiroshi Tasogawa’s book All the Emperor’s Men is an excellent source, which I would say is almost required reading for Kurosawa fans. Although the book mainly concentrates on Tora! Tora! Tora!, which we will discuss next month, it gives an excellent insight into Kurosawa’s mid-to-late 1960s working practices and what went wrong with his attempts to work within the Hollywood studio system.

Meanwhile, a good companion film could be Tony Scott’s 2010 excellent action film Unstoppable, which also features a runaway locomotive and which was the final film that Scott directed before his suicide in 2012.

Next month, we will be moving onto Kurosawa’s other failed Hollywood project, Tora! Tora! Tora!.

I like Runaway Train, but it is a wildly uneven film, with odd pacing and too long of a stretch before we even reach the train. But when it’s good, it’s great.

Edward Bunker did a pretty sizeable rewrite on the script, adding elements (especially the opening material) from his own prison writings. I can’t get into much more detail than that, as my only attempt to read Bunker’s messy writing didn’t go well and was quickly abandoned. Having read the Runaway Train script (a near shooting draft, well past the Kurosawa era), a lot of it matches Bunker’s style. His dialogue was especially lousy in that draft, and was thankfully given a final polish by Paul Zindel, a novelist I enjoy significantly more.

Have any of you ever seen Emperor of the North?

It’s from 1973 and is probably my favorite film of Robert Aldrich. The themes and style are somewhat in line with what, in my mind, Kurosawa’s film could have been like. Plus it’s a darn good movie and worth a watch.

Unstoppable is a solid popcorn flick. Not particularly deep in any way, but genuinely exciting and well put together. One of my favorites from the late Scott.

Indeed, something that I should have mentioned in the introduction, but completely forgot to, was that the script was definitely rewritten for Konchalovsky’s film. IMDb lists Bunker and Zindel together with Djordje Milicevic as the screenwriters.

According to the Alaskarails.org page that I linked to in the introduction, Milicevic was credited as the author of the first draft, dated 15th January 1985. The page also notes the slight differences between Milicevic’s version and the final production script. I suppose after Milicevic, Bunker then did his rewrite, and finally it came to Zindel, as you mentioned, NoelCT.

I haven’t seen Emperor of the North but will keep an eye out for it!

I can’t remember when I first saw this film – it was a long time ago and on TV – but its long been one of my favourite films, and this is well before I was into Kurosawa or knew about the films link to Kurosawa. I’m not sure why this is – something about this films rigorous style has always made it stand out for me among other similar thrillers. Although not quite as good as Deliverance, I think Runaway Train has something of that films mythic depth. Its certainly not without its flaws – the characters played by Roberts and de Mornay are quite weak and unconvincing (more the scripts problem than the actors I think). But Voights performance more than makes up for this.

I don’t understand why, but Netflix US doesn’t have copies in stock, so I won’t be joining in the discussion of this movie. I should be receiving disc 1 of The Human Condition later this week, but given that the plan I’m on provides two discs a month and there are other movies I want to watch, including next month’s movie, it’ll be awhile before I finish it.

I see the director of Runaway Train is still working at age 83 – Andrei Konchalovsky has made a new film set in the Soviet Union.