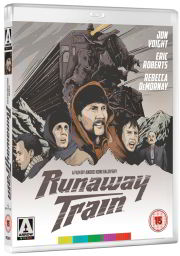 UK based Arrow Films will be releasing Andrei Konchalovsky‘s 1986 film Runaway Train on July 22, 2013. The new release will be served in dual format that includes both a DVD and a Blu-ray version.

Based on a script written by Akira Kurosawa, Ryuzo Kikushima and Hideo Oguni for Kurosawa’s planned but failed American directorial debut, Konchalovsky’s celebrated action film was nominated for three Academy Awards and three Golden Globes, as well as competing in Cannes for Palme d’Or. As a UK release, the film is encoded for region B (Blu-ray) and 2 (DVD). This appears to be the first time that the film is available on Blu-ray.

The release is packed with special features, which include the following:

It will be interesting to see how much (if any) of these extras concentrate on the film’s origins with Kurosawa.

The film will be our Akira Kurosawa film club‘s title of the month in March, 2014.