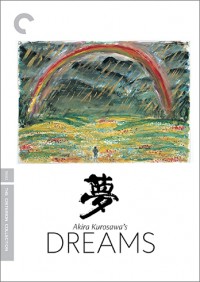 Criterion has announced a November 15 release date for Akira Kurosawa’s Dreams, marking the first time the film has received the much celebrated Criterion treatment.

Criterion’s Dreams will be available on both Blu-ray and DVD, and it is sourced from a newly restored 4K transfer that was supervised by the film’s cinematographer Shōji Ueda. The release will be region encoded for the North American market.

Extras include a new audio commentary by Kurosawa expert Stephen Prince, a 150-minute making of documentary shot on the set by Nobuhiko Obayashi, as well as the 50-minute interview documentary Kurosawa’s Way that was released in 2011 in France after being put together by Kurosawa’s longtime translator Catherine Cadou and featuring numerous major filmmakers talking about Kurosawa and how he influenced their own work. The extras also include separate interviews with director Takashi Koizumi, who worked as Kurosawa’s assistant director for the film, as well as Teruyo Nogami, Kurosawa’s longtime assistant and production manager.

The release also comes with a new English subtitle translation, a trailer, and a booklet with an essay and the script for the never-filmed ninth dream.

Criterion’s plans to release Dreams were rumoured at the beginning of the year, and it is now great to see those rumours confirmed. The new transfer is especially welcome considering the fairly poor quality of the available English language releases. The selection of supplementary materials is also very interesting indeed.

Akira Kurosawa’s Dreams can currently be pre-ordered from Criterion’s webshop.

Thanks for the comment, Razor Gage. I guess I just assume that whoever finds their way into this little hidden corner on the internet knows Kurosawa inside and out, and the original release date of Dreams is obvious to them. I might of course be wrong there. ? I’ll keep this in mind.

Thats great news, the only version I’ve seen was a very poor print, I think it would be well worth the investment if its up to their usual standards.

Just to be clear, Ugetsu: this is a four-year-old news story. The release actually came out back in 2016. (And like someone recently pointed out, it’s somehow still missing from my Blu-ray list…)

It is a really nice upgrade, the colourful episodes really come to life I thought . Much much better than the old DVD

Wow, I was sitting here thinking that perhaps my Criterion 842 was bootleg, then realized this is a zombie thread. 🙂 You all had me truly wondering.

No worries, I was laughing when I realized what happened. Vili even mentioned it and I missed it.

I’d like to tell you my version of the Kurosawa Story that I one day hope to publish on Deviantart. In this version of the story there are many differences: For example Akira, and his wife Yoko are 18 to 26 years older than their kids and this story takes place in the present, some time after or around January or April 2010. Kazuko in this story’s the eldest, nine to eight years after her, their firstborn, Yoko gave birth to the couple’s second and last child, a son they named Hisao. Exhausted by the making win of Jeoprady (which is also the subject of our stories in which Akira’s the host) and overjoyed about his new son, Akira spent more than a year with his family (including his parents and older siblings) before taking on a new project, Family Time Feud, although this screenplay won’t be released yet. On to our Kurosawa story, while the Kurosawas continue game shows like Family Feud they’ve moved to a new 3,600 square foot residence in the Setagaya district in Tokyo. The children are also growing or were. Kazuko, now 16 or 18, in high school was already majoring in economics and enjoying moderate success as a Silver folk musician, while the eight or ten year old Hisao was attending elementary school. Akira’s also enjoying his own creative freedom and success. Tell Me if this story amuses you and also it’s November 22 so happy birthday to Mitsuko Baisho who worked with Akira and happy anniversary to one of his films.