Criterion to release Kurosawa’s Ikiru on Blu-ray in November 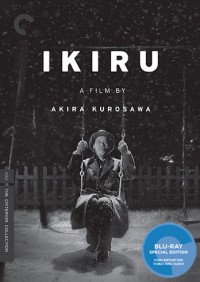 Criterion has just announced their lineup for November, and it includes a Blu-ray edition of Akira Kurosawa‘s Ikiru, alongside a new DVD set. This will be Criterion’s first update on the film since their original DVD release in 2004 and it will be available on November 24.

The primary reason to get excited about the upcoming release is the brand new 4K digital restoration which serves as the source for both the Blu-ray and the DVD prints. The Blu-ray will also feature an uncompressed monaural soundtrack.

Other new features are an updated cover image and an essay by critic and travel writer Pico Iyer which was not included in Criterion’s original release. Otherwise, the announced extras are identical to those found on the original release: Stephen Prince’s audio commentary, the 90-minute A Message from Akira Kurosawa interview documentary with Kurosawa, an episode of It Is Wonderful to Create, and of course a trailer.

Just as with the original, the announced DVD edition will be a double DVD set. And as always with Criterion, the Blu-ray set is encoded for region A (the Americas, East and Southeast Asia), while the DVD is restricted to Region 1 (North America).

Both the Blu-ray and the DVD are available for pre-order from Amazon.com, as well as from Criterion’s website.

Other Criterion titles for November 2015 include Satyajit Ray’s The Apu Trilogy, Richard Brooks’s In Cold Blood and D. A. Pennebaker’s Bob Dylan documentary Don’t Look Back. For a full list of Criterion’s upcoming releases, see here.