Criterion releases Throne of Blood on Blu-ray and DVD 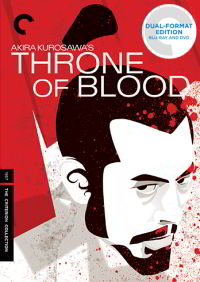 Criterion’s new North American release of Akira Kurosawa’s Throne of Blood is out today as a dual format package which includes both a Blu-ray and a DVD version of the film. This updates the company’s already fairly good release from 2003. So, what’s new?

I have personally not had the opportunity to inspect the new release as Criterion does not send review copies to Europe, and besides I already have a couple of Throne of Bloods so I haven’t felt an urgency to order the new release immediately. Fortunately, other reviewers have not been similarly restricted.

Their consensus is that the new release is a clear improvement over Criterion’s previous transfer, or indeed any English friendly release out there. DVD Beaver calls it a “[s]olid upgrade from the 10-year old Criterion DVD. Everything is visually superior in the 1080P transfer, more layered contrast, sharper, a hint of textured grain, more information in the frame”. Blu-ray.com agrees with the above, and further notes that “improvements in the audio department are rather impressive” as well. The release is similarly praised by the reviews by Home Theater Forum and DVD Talk.

In addition to its improved video and audio quality, the new release adds as a new feature the episode of Akira Kurosawa: It Is Wonderful to Create which deals with the making of Throne of Blood. The other extra features remain the same as before, and include Michael Jeck’s audio commentary, two subtitle translations, a trailer and a booklet featuring subtitling notes as well as an essay by film scholar Stephen Prince.

For information about the availability of the film on home video, check out the DVD and Blu-ray sections of this website.

Criterion’s next Akira Kurosawa release will be The Hidden Fortress, which will also be a dual format release and comes out in March.