Criterion to release The Hidden Fortress bluray in March 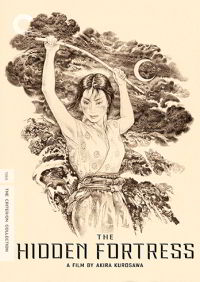 With just one week until the release of Criterion’s new Throne of Blood bluray, it’s time for another Criterion related bluray announcement. As listed in their December newsletter, Criterion will be releasing Akira Kurosawa’s The Hidden Fortress as a dual format bluray + dvd package on March 18, 2014.

This is the first time the film will be available on bluray with English subtitles. Criterion has also updated the offering in other ways from their original dvd release from 2001.

The bluray of course comes with a new HD quality transfer, but also includes a new audio commentary by film scholar and Kurosawa expert Stephen Prince. As with their other up-to-date releases, Criterion will also be including the relevant episode from the Toho Masterworks documentary series titled Akira Kurosawa: It Is Wonderful to Create. Criterion also lists a new subtitle translation and a booklet with an essay by Catherine Russell. Like their original dvd release, the set will also include the 2001 interview with George Lucas and the film’s original theatrical trailer.

All in all, it sounds like a definite upgrade when compared to Criterion’s original release.

Like most Criterion releases, the bluray will be region A and the dvd region 1 encoded, meaning that it is intended for the North American market.

Criterion has also chosen to change the cover, which in principle is a good thing, as their original cover was easily the worst in the Kurosawa lineup. Unfortunately, the new cover doesn’t feel quite right, either. Or maybe it’s just me? What would your cover for The Hidden Fortress be?

Criterion’s new dual format release of The Hidden Fortress will be out on March 18. For information about the availability of the film and other Kurosawa’s films on Blu-ray, check out the Kurosawa Blu-ray list.