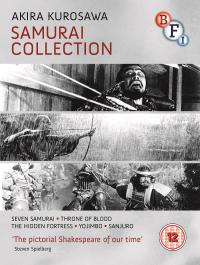 The British Film Institute is currently preparing Akira Kurosawa Samurai Collection, a four-disc Blu-ray box set containing five of Kurosawa’s samurai films which will be released on 25 August 2014. The Region B (Europe) collection comes with an assortment of extras.

The films includes are:

And the special features include:

The films are naturally presented in their original aspect ratios. There is no word yet what HD transfers the BFI collection will be using, or how the individual films compare to Criterion’s American releases.

Also on August 25, BFI will be putting out an individual release of Seven Samurai, which has previously been available only as a Limited Edition Steel Book package.