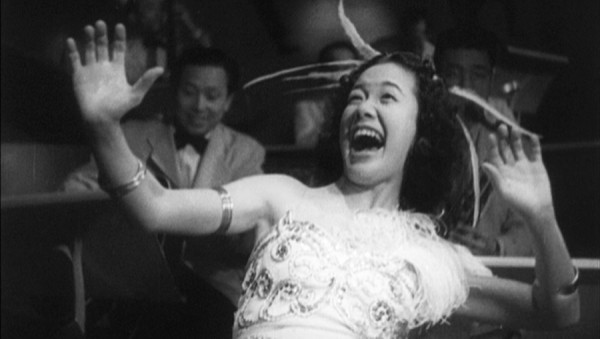 Akira Kurosawa’s influence on other filmmakers is well documented, but his impact on global culture goes far beyond the silver screen. In this latest article of the 10 Pieces of Akira Kurosawa series, we’ll take a look — or rather listen — at ten fairly recent songs that have Kurosawa connections.

The genres on offer here are diverse, ranging from pop and funk to folk and Bollywood musicals. Kurosawa himself was of course a big lover of music, and in addition to working closely with his composers on all of his films, he also penned the lyrics to “Jungle Boogie”, the song featured in Drunken Angel and pictured above.

If this were a talent competition, which of the following would get your vote?

The 2009 Bollywood film Chintu Ji featured this incredibly catchy song whose lyrics consist primarily of names of famous filmmakers, with Kurosawa’s the titular name repeated in the chorus together with Vittorio De Sica’s. The song was recorded by Indian singer Anushka Manchanda and is lipsynced in the film by Sophiya Chaudhary.

Pay special attention to the village leader’s solemn declaration at around 2 min 25 sec. It cracks me up every time. For more information about the film, see IMDb.

“Rashomon (Lover’s Puzzle)” is the title song of the 2010 album by the Taiwanese actor and pop recording artist Show Luo. The album, which was the artist’s eighth, topped charts in Taiwan and reportedly ended up selling around 150,000 copies. It’s not a bad album in its genre, either.

As far as I can gather, “Rashomon” is a love song which equates the search for love with the puzzle presented in Kurosawa’s film of the same name. I may be way off here too though, as I don’t speak a word of Mandarin. The album’s Wikipedia page is here.

Kagemusha (song by Danny Friedman and the Beastman Band)

This rather humorous piece basically narrates the story of Kurosawa’s Kagemusha and then goes on to give a brief account of its release and reception. Very informative! The singer’s pronunciation of the film’s title is also hilariously wrong.

According to the group’s Bandcamp page, “Danny Friedman and The Beastman Band is a musical collective founded on the hybrid vigor of rockabilly, R&B, country-folk, and hard funk.” The song is from their self-titled 2010 album.

Here’s another song which is a bit off the beaten path. Яudy Quazar is a high energy rock band from Canada and their track “Akira Kurosawa” comes from their debut album titled Self-Titled Debut Album. The song’s lyrics consists of repeating Kurosawa’s name and the film titles Rashomon, Seven Samurai, Ran and Stray Dog.

The band doesn’t seem to be around any longer, but you can find their website here.

This isn’t an official music video for the song, but rather someone taking Lucinda Williams‘s 1998 song “Drunken Angel” from the album Car Wheels on a Gravel Road and putting it into footage from Kurosawa’s film Drunken Angel. The result is actually quite clever and the video was even posted by the artist’s Facebook page.

According to online resources, the song is about Williams’s friend Blaze Foley, a songwriter who was shot and killed in a bar over a senseless argument. More Lucinda Williams can be found on her aforementioned Facebook page, as well as her homepage.

Throne of Blood (album and song by Marta Wiley)

Marta Wiley is a Mexican born, now US based painter, singer and songwriter whose 2012 album is titled Throne of Blood and features this track of the same name. Although the contents have little to do with Kurosawa, the title cannot be a total coincidence.

And while we are talking about Throne of Blood, there is also an unconnected record label with the same name.

Here’s a New Orleans funk rock band that goes by the name of Yojimbo and it seems like a fairly safe bet that the band is named after Kurosawa’s film, especially as lead singer Carly Meyers is described on their website as wielding her trombone like “a mystical samurai sword”.

This song, titled “Subliminal Socrates”, is from their latest album Ghost Birthdays which came out last year and has nothing to do with Kurosawa. You can find more information about the band at their homepage and Facebook page.

7 Samurai are a Swedish electronica and nu-jazz duo. This is a track from their 2008 album El Mundo Nuevo, which appears to have nothing more to do with Kurosawa than the band’s name. Also, despite having a number of releases to their name, they don’t appear to have much of an online presence.

The Samurai Seven was another Seven Samurai inspired band name. The former Oxford (UK) based pop group was formed in the mid-90s and disbanded in 2006. Their 1998 album Xeroxy Music got some recognition and airplay in the UK, but they never quite made it big.

The band’s name preceded the similarly titled anime series by about a decade.

One Week (song by Barenaked Ladies)

There are a number of songs which name drop Kurosawa, including this 1998 song by Barenaked Ladies, which was a hit on both sides of the Atlantic. The Kurosawa line (“Like Kurosawa I make mad films, okay I don’t make films, but if I did they’d have a samurai”) is at 1:46, just after some timeless 90s cultural references.

Other songs that mention Kurosawa include Move to Japan by The Band (“Tokyo’s got the neon, I put a pot of green tea on. Akira Kurosawa, Sapporo, Okinawa.”), a song called “Sergio Leone” by Jackson Browne (who sings about Leone: “what he stole from Kurosawa he bequeathed to Peckinpah”), Come a Rain by Kevin Welch (“Kurosawa was a samurai, Achilles was a gimp, Django was a miracle, Rasputin was a pimp”) and Keep on Moving by Audio Bullys (“The club scene was banging at the time, house and garish, pills and white lines, Kurosawa little strain on the mind”).

Posted in 10 Pieces of Akira Kurosawa