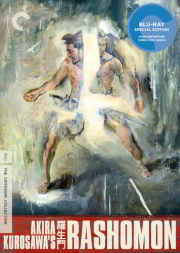 Criterion has announced that it will be releasing the recently restored edition of Rashomon, which was touring cinemas a few years ago. As the company’s Rashomon page suggests, the new edition will be available on the 6th of November 2012 in both DVD and Blu-ray versions.

In addition to the new print, Criterion’s new edition will also differ from their earlier one by including A Testimony as an Image, a 68 minute documentary featuring many of the people who worked on Rashomon. This was not part of the original Criterion DVD release of Rashomon, although it is included on the UK 2008 Optimum edition, as well as on the Australian Madman release. (For more information about the different Rashomon releases, see here.) What the other releases don’t have is an archival audio interview with Takashi Shimura, which will also be included on the new release.

In addition to the documentary and the interview, the Criterion discs will according to the Criterion page also include a new English subtitle translation.

The other special features included on the disc are the same as on Criterion’s original Rashomon release:

It is great to see Criterion improve on their already fairly excellent Rashomon release. The new restoration should be great, and with this being to the best of my knowledge the first time the film is out on Blu-ray with English subtitles, I’m sure that this will be a must buy for many Kurosawa aficionados, myself included. How about you?

For information about Rashomon‘s availability on Blu-ray, check out the Akira Kurosawa on Blu-ray section of this website.

I’m surprisingly excited about this too, considering that I can’t possibly fit yet another copy of Rashomon into my Kurosawa shelf!

By the way, welcome to ak.info, Suzanne! I’ve seen your name in the subscribers’ list for a few years now, but this is (to the best of my knowledge) your first post here. I hope it’s not your last. 🙂

Oh my, I feel honored to be acknowledged by thee Vili! I LOVE your website almost as much as I love Kurosawa himself! Thank you for giving Kurosawa fans such an awesome site with such a wealth of information!

I only have Seven Samurai on DVD (my all time favorite movie EVER with my all time favorite actor Toshiro Mifune! ), but I’ve seen 22 of Kurosawa’s films and LOVE every single one of them! I look forward to getting Rashomon and growing my Kurosawa library!

As far as that being my first comment, it was. I feel like I don’t know enough about film to make important contributions to any of the discussions, but I read them all!

Keep up the great work Vili! I look forward to your next post! 😀

Welcome, Suzanne! You’re only adding to the reputation of Seven Samurai around here as a chick flick 😆 seeing as its most enthusiastic fans and boosters are all women (me, Cocoskyavitch, and Amnesty11). We’re all Mifune fans as well.

All that’s required to comment is an opinion and the ability to articulate it. I haven’t watched as many of Kurosawa’s movies as you, I don’t think; I haven’t seen his contemporary movies from the 50s and 60s or Red Beard, and of his later movies, I’ve only seen Dodesukaden and Ran. I know little about film other than what I learn from watching. Ugetsu in particular makes more a study of film than I do; Coco has the art background to analyze movies differently from anyone else on the forum. The only person I know who shows up here with any regularity who has any formal or professional connection to film or film criticism is dylanexpert.

That said, the comments made cover a wide swath of territory, so if anything you’d say has already been covered, I can understand why you might not want to add to the discussion.

Thank you for the warm welcome Lawless!!! By the way, I love your avatar, she’s beautiful! 🙂 I think I should find a good photo for my avatar now!

Thanks, Suzanne! I like your new avatar very much.

Mine is Kanzeon Bosatsu, the Buddhist Goddess of Mercy and Compassion, also known as Kannon/Kwannon (Japan) and Guan Yin (Chinese), as reinterpreted by Kazyua Minekura in her manga Saiyuki. While se looks 100% female, canonically, se is intersexed, or what used to be called hermaphrodite. As Kanzeon’s assistant Jiroushin (also part of the Buddhist pantheon) explains, under the manga’s current rating (OT, or 16+), the mangaka can’t show that se is intersexed. (In Buddhist mythology, Kannon/Guan Yin was originally male, then reinterpreted as female, and in some casees as intersexed, so this isn’t a huge leap on the mangaka’s part.) So using the avatar is a little bit of a sly poke at gender expectations on my part. It’s also the default avatar for my LiveJournal and Dreamwidth journals.

As for the manga itself, it’s a reimagining of the Chinese folk novel Journey to the West, perhaps better known to Westerners as Monkey after the Arthur Waley condensed translation and the most famous of the Japanese TV versions. JttW is the source for the character Son Goku in Dragon Ball Z, which isn’t otherwise as similar in storyline to JttW as Saiyuki is.

I had considered adding to my most recent comment on the thread I began on Shino’s agency in Seven Samurai something about how the backstory of Hakkai, one of Saiyuki’s main characters, resembles the story of Rikichi and his wife, except in that case, Hakkai (then known as Gonou) was not present when the villagers decided to sacrifice his lover, to whom he wasn’t married — in fact, they were brother and sister who’d been separated from toddlerhood until they met again at college in their late teens and had fallen in love before realizing that they were brother and sister — to the centipede demon Hyoukugen Maoh (I may have the spelling wrong), who was well-known for kidnapping, raping, and killing human women.

Gonou goes berserk, slaughters half the village (presumably including children who were his students, as he was a teacher), finds Hyoukugen Maoh’s castle, storms it, killing 999 demons (or youkai) in the process, and frees her, only to have her snatch the knife he’d used away from him and kill herself after telling him that she is pregnant with Hyoukugen Maoh’s child. Half-human half-youkai are outcasts shunned by both groups, as is demonstrated by the experiences of another of the main characters, so her feeling that she and her child are condemned to a terrible existence is not unfounded. Also, she and Gonou were brought up Catholic, with strictures against abortion.

Gonou then is confronted by Hyoukugen Maoh’s son, Chin Yisou, whom he fights and kills, but not until after Chin Yisou convinces him of the truth of the legend that one who has bathed in the blood of 1,000 youkai will himself become a youkai. Gonou transforms into a youkai while suffering from a grave wound to the gut. (The mangaka has made it clear in an interview that the legend is just that — a legend — and that it is Gonou’s own mind and chi-manipulating abilities that transformed him into a youkai, not killing 1,000 youkai.) He walks or drags himself away from the castle and is later found collapsed on the road and is rescued by the main character referred to above who is himself half human, half youkai.

All of which is a long, roundabout way of saying that there are some Saiyuki fans, most or all of whom are female, who find Gonou’s sister-lover’s actions unforgivable, whereas I think they’re reasonable, just as I think Rikichi’s wife’s suicide was a rational response to her situation.

Wow Lawless, what a fascinating story!!! 😀

Suzanne – Thanks! I’m always looking to win converts to read Saiyuki. All but the last volume of Saiyuki Reload and the first volume of Saiyuki Reload Blast are available in English for the American audience. It was published by the now-defunct TokyoPop, so it may eventually go out of print or already be out of print, but used copies are easy to find.

The last volume of Reload is available in English through Chuang Yi (Singapore-based) and can usually be purchased on eBay, which is how I got it. I don’t know about Reload Blast; that volume just came out in Japanese. I hope Chuang Yi will license and publish it in English, but I’ve seen all of the chapters already through a LiveJournal community that does side-by-side scans and translations and thus is not a traditional scanlation, where the Japanese dialog is whited out and the English dialogue substituted for it. The scanlations are not nearly as good as the professional translations or the LiveJournal community’s translations.

There’s also a prequel known as Saiyuki Gaiden that is based on the first five chapters of Journey to the West that hasn’t been published in English yet. It features the pre-incarnations of Saiyuki’s main characters with the exception of Son Goku, who is the same character. Since that series finished in 2009 with four volumes, I hold out little hope it will ever be published in English. I’ve read it via a combination of scanlations and the LiveJournal community, which only did the last couple of volumes; it is super sad, though, so only read it if you’re prepared to cry your eyes out.

There’s another prequel, Saiyuki Ibun, about the training of the master to whom one of the main characters (Sanzo, better known via his Sanskrit name, Triptaka) is the successor, but fewer chapters of that have been published than Saiyuki Reload Blast and it’s currently on hiatus. The mangaka took a year and a half off in 2010-2011 due to surgery.

Thanks Lawless, I’ll have to check it out!

*wipes hands* Then my work here is done. 😀

Suzanne: Thank you for giving Kurosawa fans such an awesome site with such a wealth of information!

Thanks for the thanks, Suzanne, but the real thanks belong to the other people here who contribute to the discussions! Without everyone else, it would be just me talking to myself, and while I have no problem with that, it might be a little strange for an outsider. 😉