Films that Akira Kurosawa worked on as an assistant director, such as the 1941 film Horse (馬), have recently been made available on DVD in Japan, alongside almost all of the films that Kurosawa wrote for other directors.

Since 2018, publisher Asahi Shinbun has been putting out a series of magazines that discuss a Kurosawa film and come with a DVD that contains it. I saw the release announcement back when the series started and thought that it was a nice idea, and then forgot all about it because I already have enough copies of Kurosawa’s films, especially on DVD, and the magazines looked interesting, but not as interesting as to warrant import fees. That was a mistake.

Last year, after having gone through Kurosawa’s 30 films, the series turned its attention to films that Kurosawa was involved with but did not direct himself. Release #31 was Horse (1941), which Kurosawa practically directed on his own and that many of us have wanted to see. Release #32 was the 1948 film The Portrait that Kurosawa wrote for Keisuke Kinoshita. And so on it has gone until apparently finally finishing two months ago with release #71 (!), which concentrated on the making of Ran, including Chris Marker’s 1985 documentary A.K..

A huge thanks goes to François Coulombe, who wrote to me about the movies now being available. And apologies that it has taken this long for me to act on this.

Here is the full list of releases in Asahi Shinbun’s “Akira Kurosawa DVD Collection”. The interesting stuff starts from release #31. No subtitles are included of course, and everything is in Japanese.

That’s a pretty comprehensive collection! For slightly more detailed descriptions of these films, you can check my Films with Kurosawa’s involvement page, although that is obviously now out of date when it comes to availability information. 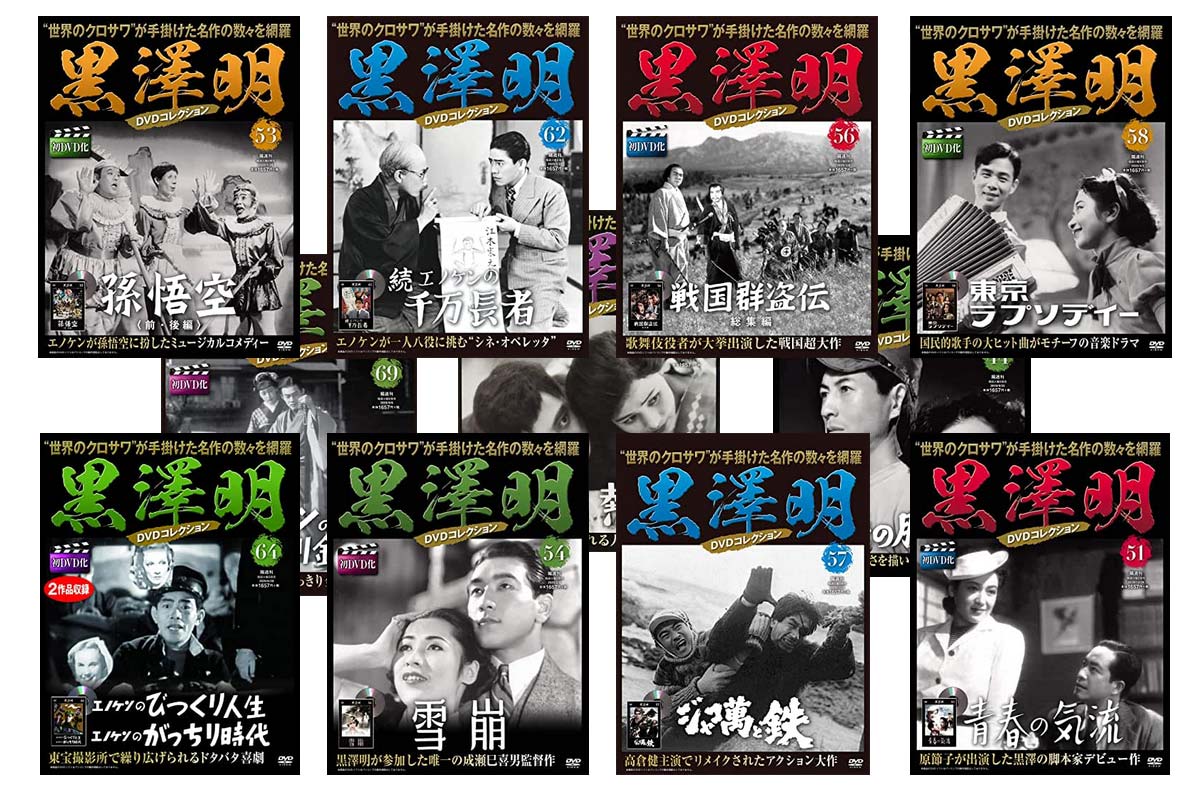 Not everything is included in the collection, of course. Curiously, Kurosawa’s TV film Song of the Horse is not part of the series, nor are the films directed after Kurosawa’s passing: After the Rain, The Sea is Watching and Dora-Heita. Fortunately, those are all available on home video anyway.

But sadly missing is also the 1946 film Those Who Make Tomorrow that Kurosawa was pressured to take part in directing and that few have seen, as well as the 1950 Tetsu of Jilba which was co-written by Kurosawa for Isamu Kosugi. Another interesting film would have been The Legacy of the 500,000, the only film directed by Toshirō Mifune, and which Kurosawa edited into its final form.

The other missing films are three films where Kurosawa worked as the chief assistant director under Kajirō Yamamoto: Easy Alley (1939), Chusingura Part II (1939), and The Beautiful Hawk (1937), as well as Kurosawa’s very first work in the film industry, Paradise of the Virgin Flowers (1936) where Kurosawa worked as a third assistant director under Shigeo Yagura. And finally, also not included is Spring Flirtation (1949), a Kajirō Yamamoto film that Kurosawa produced.

But one should certainly not look a gift horse in the mouth (especially since it actually has Horse). This series has literally everything else, and many of the included films have never been available on home video before, and those that were, were only available on old VHS tapes.

As I understand it, and I have not seen any of these in person yet, each release comes with a magazine that talks about the film, as well as the DVD. As I mentioned before, no subtitles are included, and everything is of course in Japanese. Hopefully, some aspiring Western company might see an opportunity here and put these out for international audiences with English subtitles.

But if you do speak Japanese or are just curious, all of Asahi Shinbun’s Kurosawa collection releases are available at Amazon Japan, although they may not ship to all countries. Let me know if you know of other good and reliable shops that stock these and offer worldwide shipping.

Inspired by this, and people repeatedly telling me how out-of-date some of this website’s sections are, I am currently working on a full rewrite of this website’s filmography sections, including information about availability of these and English-friendly Kurosawa releases.

I would be happy if someone reissued The Quiet Duel. Last I checked (okay, it was awhile ago), it was only available used at high prices.

I hope they will make it to the west. It would be a great opportunity to get some more of my money. 🙂

If you will pardon the self-promotion, I wrote about a few of these films in my book “On Kurosawa” which you kindly reviewed here. Jakoman and Tetsu, The Den of Beasts, Saga of the Vagabonds, Sword for Hire and Snow Trail are all excellent. The Portrait is interesting, but a bit sentimental, like much of Kinoshita’s output.

PeterT: If you will pardon the self-promotion

Kurosawa related self-promotion is not only welcome but very much encouraged here, Peter. Doubly so when we are talking about something as unique and wonderful as your book (more information here for those who need context). I was actually just leafing through On Kurosawa last week, re-reading some of my favourite parts.