Book Review: On Kurosawa – A Tribute to the Master Director 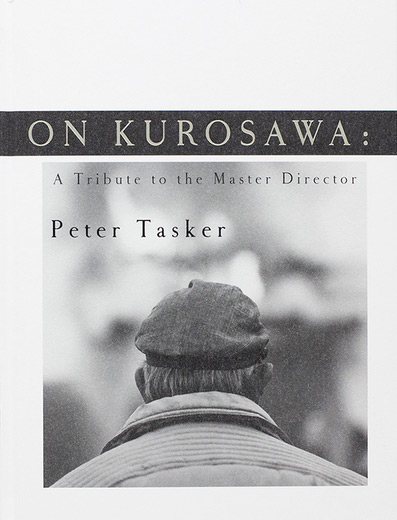 Peter Tasker’s Akira Kurosawa book On Kurosawa: A Tribute to the Master Director was published at the end of last year. Unlike most Kurosawa books, it’s not a biography or an academic study, and neither is it really an introduction to the director’s works. So, what is it? Let’s find out, since the publisher was kind enough to send me a review copy all the way from Japan.

The first thing that you notice about On Kurosawa: A Tribute to the Master Director is that it is one seriously good looking object. Its covers are restrained black and white and when you open the book you notice that the designers have chosen to follow this palette throughout, with a few strategic splashes of colour here and there. The layout and typeset are modern and pleasing to the eye and the high quality paper has a lovely touch to it. The book comes with a bound bookmark. One of its first images is a reproduction of Kurosawa’s personal hanko seal. Yes, it’s that kind of a book.

But we have all been told not to judge a book by its cover. I take that to extend to its design as well. So, what exactly is On Kurosawa about?

The publisher describes the book as a collection of “essays, poetry and short-stories” and that is certainly an adequate way to characterise what is inside the covers. Still, a more on-point description is the one given by the author in the preface where he mentions the Japanese literary genre zuihitsu as the work’s primary model. If you are familiar with Japanese classics like The Pillow Book (Makura no Sōshi), Essays in Idleness (Tsurezuregusa) or The Ten Foot Square Hut (Hōjōki), you already have a pretty good idea of the general style of Tasker’s book. But if you don’t know those works, imagine someone watching all of Kurosawa’s films and responding to each film by writing down some more or less spontaneous thoughts, short stories, poems, essays or whatever else the film happens to inspire.

Now, this is clearly a highly potent recipe for disaster. Fortunately, Peter Tasker makes it work quite admirably. 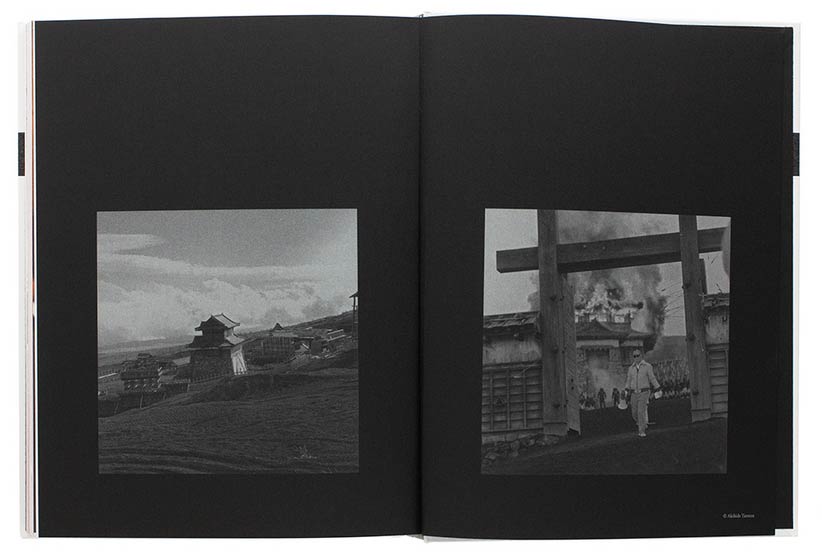 On the more familiar side of things are the essays. Some of them are interpretive, others a bit more review-like. Many discuss historical or biographical details. All of them are well written and none longer than a couple of pages. Tasker, who has lived in Japan for decades and written half a dozen books about the country, demonstrates a pretty deep understanding of local culture. Some of his chosen topics will be familiar to those who have read other Kurosawa books, others probably less so. One section I found particularly interesting was about the clash of world views between Kurosawa and Yukio Mishima, the author and right-wing nationalist who staged a failed coup d’état in 1970. Another memorable part talked about Osman Yusuf, a Turkish national living Japan who appears in Sanshiro Sugata Part II as an American sailor — the one that gets thrown into the sea at the beginning. While not in-depth examinations by any means, the essays offer many interesting observations, connections and explanations. In addition to Kurosawa’s own films, Tasker also discusses a number of films that Kurosawa wrote for other directors, or was otherwise involved with.

Alongside the essays are the fictional pieces. In some, Tasker writes from the point of view of a character in a Kurosawa film. In others, he takes on the role of a historical person. For example, the chapter on Tora! Tora! Tora! is structured like Rashomon and gives us four different points of view on what happened: the producer’s, the director’s, the personal manager’s and the film critic’s. Meanwhile, the chapter on One Wonderful Sunday is written from the perspective of Masako, the film’s female lead character — although apparently she doesn’t like to use that term. The one on Ikiru is written as the novelist who in the film takes Watanabe around Tokyo nightlife and is now responding to the news of his death. Many of the fictional pieces break the fourth wall and sometimes other walls as well. They are in nature playful and present ideas and interpretations in ways that more conventional essays probably couldn’t. As with any piece of fiction, some of these will work better for you than others. I certainly have my favourites while others clicked with me less. 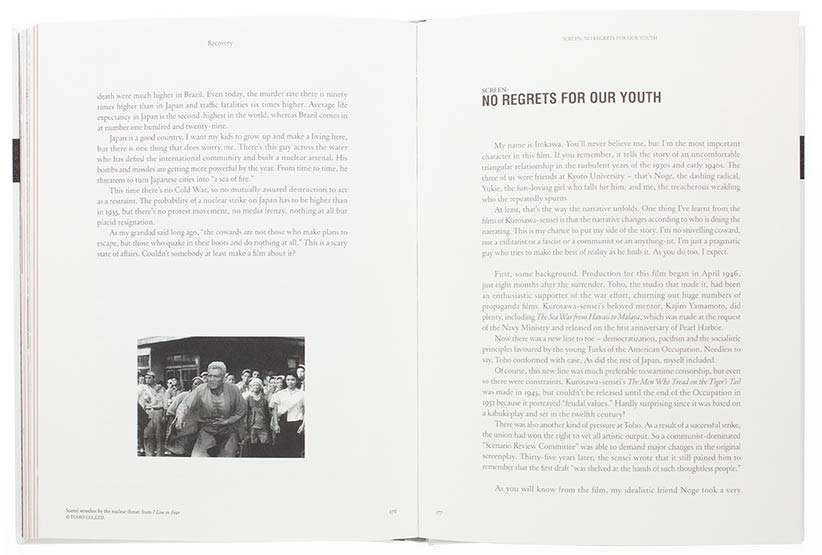 In addition to the prose writings of the essays and the short stories, there are also

By which I mean to say that I quite enjoyed Tasker’s often light-hearted poetic exercises, many of which delighted me by offering surprising angles on familiar subjects. The book includes both shorter and slightly longer poems that cover a fair range of subjects, both historical and imaginary. My personal favourite was probably the ten-line piece on Toru Takemitsu. But included are also short odes to Setsuko Hara’s nose, Toshirō Mifune’s eyebrows, and Takashi Shimura’s mouth. This book really has something for everyone.

Finally, there are the fairly liberally scattered quotes and pictures. If you are familiar with what has been published about Kurosawa before, you will more or less know all of them. When I first learnt about the book, I actually became quite excited about the publisher’s description which mentions “photographs taken behind the scenes by set photographer Akihide Tamura”, but in the end these photos are pretty much the ones that have been circulating for years in different publications, not to mention online. The same is largely true of the screenshots and most of the quotes. However, one must keep in mind here that I encounter these daily as I try to keep an eye on what’s written about Kurosawa around the world, and if you don’t have a similarly everyday relationship with the topic of Akira Kurosawa, these images and quotes will undoubtedly be much fresher and more interesting for you. So take my mild criticism here with that proverbial grain of salt. And pepper.

If the cornucopia of content described above gives you the impression that the book is unstructured and without focus, I need to correct you about that assumption. On Kurosawa: A Tribute to the Master Director is in fact fairly rigidly organised. The book starts with your typical sections of Epigraph, Acknowledgements, Preface, Table of Contents and Introduction, altogether 19 pages. After this, the contents are divided into seven thematic sections titled Masterpieces, Breakthrough, Who is Kurosawa?, Kurosawa & Mifune, Slump, Recovery, and Coda. Each section is on average twenty pages and contains about ten chapters. Every chapter, in turn, is labelled either “Screen” or “Life”, indicating whether it focuses on a film or some historical and biographical details.

If this sounds confusing, here’s a picture that I took from the Table of Contents that will hopefully clear things up a bit: 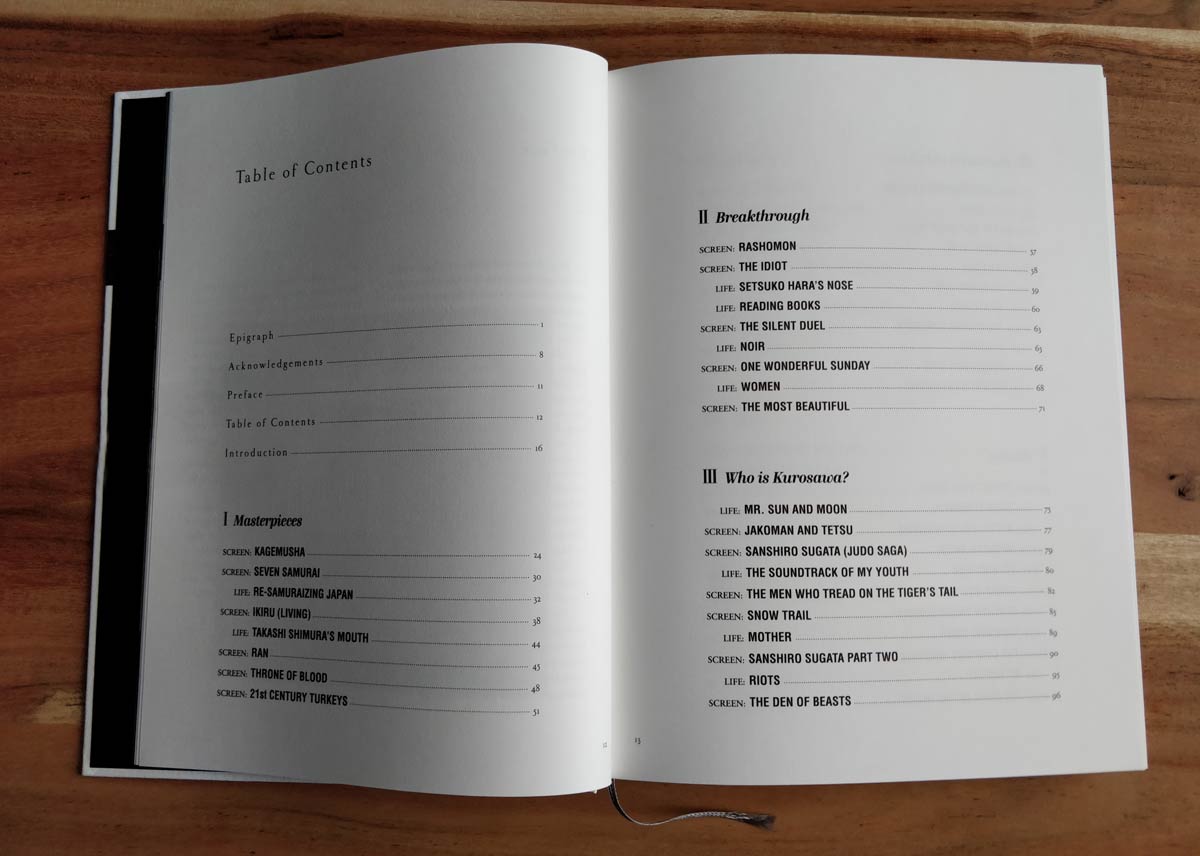 But, back to the contents. Not that there is much left to describe. After the main chapters, of which I count altogether 66, we have three pages of Sources, a Credits page and an Epigraph. The book’s total length is 213 pages.

All in all, I must say that I really enjoyed Tasker’s less conventional approach to Kurosawa’s life and films. While some chapters certainly worked better for me than others, the book offers many fresh perspectives on topics that I feel I have become quite familiar with in the last twenty odd years of maintaining a Kurosawa website. It’s always nice to be surprised in this way.

But who would I actually recommend the book to? Well, if you are totally new to Kurosawa, I wouldn’t pick this one but something more introductory from the available literature. In the end, On Kurosawa does require quite a bit of familiarity with Kurosawa’s filmography. However, if you are already familiar with Kurosawa’s life and films, and don’t shy away from things like the cat from Madadayo writing to you about the connection between human social customs and alcohol, I can definitely recommend this book to you. It’s fun, it’s interesting, and it’s a really lovely object as well.

Peter Tasker’s On Kurosawa: A Tribute to the Master Director is available from Shashasha.co and Amazon.com.

Hi Vili
thanks for this , a very interesting review and I will pick up a copy at some point.
For anyone unsure about ordering from Shashasha in Japan , they are a great company who in my experience always pack the books really well and happily ship overseas.

Thanks Vili, that looks really beautiful – I’ll definitely be ordering it.

Vili, your reviews are terrific and very helpful. Thank you!

Hi Vili, I am the author and would like to thank you for that generous and very perceptive review. The book is also now available of Amazon.com and that might be a cheaper option, depending on location.

Hi Peter! It’s great to hear that the book is now available also on Amazon as it definitely deserves a wide readership! I have updated the review accordingly.

Hi , there is now a nice web site about this book.
It seems shipping from Japan ( at least to the UK ) is expensive due to the poor exchange rates and the weight of the book.

That’s one lovely looking website, and a good digital representation of the book itself. Thanks for the link, Longstone!