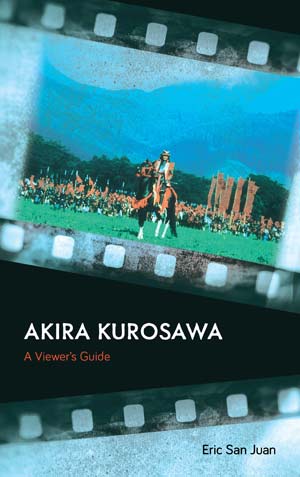 Today marks the publication of Akira Kurosawa: A Viewer’s Guide, a new book by Eric San Juan that examines Akira Kurosawa’s entire filmography. My review here is based on an electronic review copy that the publisher kindly shared with me prior to publication.

Akira Kurosawa: A Viewer’s Guide aims to provide a comprehensive, yet easily accessible examination of Kurosawa’s entire oeuvre. It was written for a reader who is interested in learning more about Kurosawa’s films but is not ready to tackle the earlier and fairly academic career spanning studies that have been published in English. It was also written for those who know Kurosawa only for his samurai films and wonder what lies beyond. The author Eric San Juan has previously written about a wide range of subjects, including Alfred Hitchcock and the television series Breaking Bad, The Walking Dead and Mad Men.

In many ways, Akira Kurosawa: A Viewer’s Guide is the kind of a book that I have often thought about writing myself. Perhaps in an alternative universe where days are 48 hours long and I’m less good at coming up with things that I want to do.

The 260-page book’s structure is pretty straightforward. After the Acknowledgements and an Introduction that serves as a brief Kurosawa biography, each subsequent chapter is devoted to a single film. These chapters move along chronologically, starting with Kurosawa’s first film Sanshiro Sugata and ending with his last one, Madadayo, and also including the rarely discussed Song of the Horse. These chapters are followed by twelve pages of Notes, a concise Bibliography and a few words about the author.

Each chapter has been designed to be self-contained, so the book can be read either in one go or dipped into in any order as you watch Kurosawa’s films. The chapters share the same repeated structure: a quote, basic production information, a short synopsis, the main analysis, a conclusion. Most chapters are between five and ten pages long and focus solely on interpreting the films’ content, not on their historical or biographical backgrounds.

Eric San Juan’s writing is direct, descriptive and not all that concerned in directly engaging with what has been written about Kurosawa before. The decision not to start a dialogue with earlier film scholars is understandable, as the book is aimed at readers fairly new to Kurosawa. Together with the modular structure of the book, this also means that the book doesn’t lay out any overreaching arguments and has no interest in interpreting Kurosawa or his films from any singular, all-encompassing point of view. Still, this doesn’t mean that the book exists in a vacuum. The author displays thorough knowledge of Kurosawa’s oeuvre and a very good understanding of the primary themes and topics that have been discussed around his films.

Akira Kurosawa: A Viewer’s Guide reminds me of Donald Richie’s classic The Films of Akira Kurosawa in both its style and approach. The book is easy and pleasant to read, covers a lot of ground, and gives the reader an excellent foundation from which to better understand Kurosawa’s works. You need neither a film studies degree nor an understanding of Japanese culture to understand what is being said.

The book should work very well for its intended audience: as an introduction to Kurosawa’s films for those who know little about them but would like to learn more. With this in mind, I do wonder a little about the asking price, as the $36 list price (right now selling for $25) for the hardcover feels a little steep for casual readers, as does the $34 ebook price (currently selling for $30). Not because the book isn’t worth it, mind you, but simply because of how books are usually priced. Hopefully, a cheaper paperback edition will come out one day as this book definitely deserves to find a wider readership and introduce Kurosawa to new audiences.

Those who are already more familiar with Kurosawa and have engaged with previous books by authors like Richie, Prince, Yoshimoto, Galbraith and the rest will not find all that much new here. While the author does offer some fresh insights, most of the book should feel very familiar to you. Hence, if you belong to this category of readers, I can’t really call this a must-buy for you.

All in all, Akira Kurosawa: A Viewer’s Guide is a very well written, welcome book that fills a space that has existed for a while in English language Kurosawa bibliography. Get the book if you are new to Kurosawa, or get it as a gift for someone who you think would be into Kurosawa if pushed a little into that direction.

Akira Kurosawa: A Viewer’s Guide is out now. It’s published by Rowman & Littlefield Publishers and can be ordered from Amazon.com and Amazon.co.uk, among other places.

For those unsure about whether to purchase the book, notwithstanding the information provided in Vili’s excellent review, Eric San Juan has indicated on his blog that he would be doing capsule reviews of all Kurosawa’s films and including excerpts from his book (on ericsanjuan.com).

This does look good, its nice to see there is still interest in publishing books on AK. It is a pity about the price, it does look a lot for a book of this nature, but I can’t pretend to know anything about the economics of the book business these days.