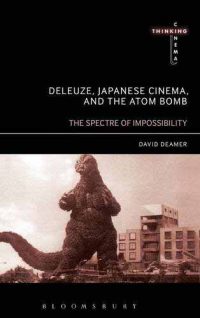 Originally published in 2014, David Deamer‘s monograph Deleuze, Japanese Cinema, and the Atom Bomb: The Spectre of Impossibility came out in a paperback reprint earlier this year and ultimately found its way also into my reading pile.

As its title suggests, the book discusses the ways in which Japanese films have dealt with the nuclear bombings of Hiroshima and Nagasaki. It does so within the conceptual framework laid down by the French philosopher Gilles Deleuze (1925-1995) who wrote extensively on cinema, especially in his works Cinema 1 (1983) and Cinema 2 (1985).

The book is strongly relevant also for Akira Kurosawa studies as it devotes an entire chapter for the director’s works. Its overall theme is also closely related to Kurosawa’s interests and oeuvre.

My review follows. As usual, it is divided into two sections: one for the content description and one for the more subjective evaluation.

Deleuze, Japanese Cinema, and the Atom Bomb: The Spectre of Impossibility is organised thematically and taxonomically, rather than chronologically. It starts with an Introduction (“Event, Cinema, Cineosis”, 1-30) that lays down the foundation: the historical context of the atom bombs and their survivors, the cultural and cinematic challenges of talking about them, and an introduction to Deleuze’s philosophy of cinema.

Chapter One (31-74), titled “Special Images, Contingent Centres”, looks at some of the most direct responses and depictions of the nuclear event. The films discussed include The Effects of the Atomic Bomb on Hiroshima and Nagasaki (1946), Children of the Atom Bomb (1952) and Godzilla (1954). Deamer shows how differently these films portray an event which, as the book’s subtitle suggests, appears impossible to fully depict or even comprehend through film. The discussion in this opening chapter is built on Henri Bergson’s theories on perception and Deleuze’s concept of the movement-image.

Chapter Two (75-120), called “Horizons of History”, moves away from the immediate responses to the nuclear bombs and into the more indirect domain of history. It looks at how Japanese cinema has explored the socio-historical context of the bomb and its survivors. The chapter continues its discussion of Godzilla and the nuclear event with Terror of Mechagodzilla (1975), with the other films discussed including Lucky Dragon No. 5 (1959), Barefoot Gen (1983), Nausicaa of the Valley of the Wind (1984), and Akira (1988). The theoretical framework for these films is built on Deleuze’s concept of the action-image, as well as Nietzsche’s views on history and the ways in which it is experienced and recorded.

Chapter Three (121-170), “Traces: Symptoms and Figures”, continues to move further away from direct depictions of the nuclear event and its survivors and instead concentrates on works where their presence is metaphorical or allusive. The films discussed include The Naked Island (1960), Dead or Alive (1999), Ring (1998), Kwaidan (1964), The Face of Another (1966), Navel and A-bomb (1960), Tetsuo (1989), and Face of Jizo (2004). This chapter builds on Charles Sanders Peirce’s theory of semiosis, as well as Deleuze’s concepts of impulse-images and reflection-images.

Chapter Four (171-217), titled “Consummation (and Crisis)”, moves the focus towards memory and is entirely devoted to the atom bomb films of Akira Kurosawa. While chapter three looked at films that display echoes of the nuclear event and the ways in which they bring back repressed memories of it, chapter four argues that Kurosawa has actually been one of the few filmmakers to attempt to explore the fundamental problems of memory and dreams in relation to the nuclear bombs. Deamer identifies four of Kurosawa’s films as concentrating on the memory of the atom bombs — Record of a Living Being / I Live in Fear (1955), Rashomon (1950), Dreams (1990) and Rhapsody in August (1991) — and discusses these films in detail and with compelling insights. He approaches Record of a Living Being and Rashomon as films that juxtapose remembering, repression and forgetting, and which in his view ultimately argue for the act of forgetting as the solution to the nuclear event. In Rashomon, writes Deamer, this act of forgetting is an act of turning towards the future, whereas in the later Record of a Living Being, it is more of a turning away from the past, a demanding and potentially violent, but ultimately necessary act of repression for a society to move forward. In Deamer’s view, these two early films can then be contrasted with Kurosawa’s two later atom bomb films, Dreams and especially Rhapsody in August, which no longer advocate forgetting as a solution, but instead propose new ways of remembering and contemplation that could allow properly processing the memory of the nuclear event. The discussion in this chapter builds on Henri Bergson’s writings on memory, as well as on Deleuze’s views on Kurosawa’s oeuvre. Within Deleuze’s film taxonomy, the chapter discusses the so-called mental-images.

The final chapter, “Impure Anarchic Multiplicites” (217-273), considers films which in their form and narrative either disregard or destroy the historicity of the nuclear bombs. These films, argues Deamer, are complex manipulations of time and memory that intertwine the pasts, presents and futures of the nuclear event and which raise questions and create thought experiments that other films could not. The films discussed include Casshern (2004), The Pacific War (1968), A History of Postwar Japan as Told by a Bar Hostess (1970), and Black Rain (1989). In its theoretical framework, the chapter returns to Nietzsche and concentrates on Deleuze’s concept of time-images.

Deleuze, Japanese Cinema, and the Atom Bomb: The Spectre of Impossibility is a well written, clear, insightful and always to-the-point examination of the ways in which Japanese cinema has (and has not) dealt with the atomic bombs. My understanding is that it is the first English language book to properly delve into this subject matter, and I congratulate Deamer for both the depth and the breadth with which he approaches this challenging topic.

It is possible to identify two primary audiences for Deleuze, Japanese Cinema, and the Atom Bomb.

The first and the most obvious group are readers who are interested in Gilles Deleuze’s philosophy and the conceptual framework that he developed for cinema. If you are here to read my evaluation of the book within this context, I am sorry to disappoint you. I have no background with which to evaluate the work from this perspective, as my previous knowledge of Deleuze and his philosophy is limited to a few short pieces on Kurosawa and a superficial understanding of his interpretation of Nietzsche, a philosopher whose works themselves I only have a very one-dimensional grasp of. What I can say, however, is that while the Deleuzean conceptual framework of cinema as I understand it after reading Deamer’s book does not seem entirely appealing to me, I am definitely curious to learn more about it and feel that, with Deamer’s guidance, I should now be able to tackle Deleuze’s own writings on cinema. This thought makes me happy. Having said that, Deamer in fact also has a book coming out this autumn titled Deleuze’s Cinema Books: Three Introductions to the Taxonomy of Images, which is intended as a full introduction to the topic. That may well find its way into my reading list before Deleuze’s books.

It is far easier for me to evaluate The Spectre of Impossibility with its second target audience in mind: that of people with a general interest in cinema, and Japanese film in particular. For those readers, this book will be both a delight and a challenge. The challenge is the conceptual framework that Deleuze created for cinema and which, it is my understanding, Deamer not only employs but also extends in this book. Yet, while this framework is definitely an integral part of the book, it should actually be possible to read it and let some of the details of the conceptual theory wash over you while concentrating primarily on the conclusions that Deamer draws in his discussion. This is thanks to the insights that the author has for each film that he discusses, and which alone are worth the admission price. Familiarity with the films discussed is of course highly recommended.

For someone purely interested in the book for its Kurosawa connection, your appreciation of the book will depend on how interested you are in Kurosawa’s films about the atomic bombs. Do note that Deamer does not discuss every Kurosawa film that has been linked to the nuclear event, as for instance neither The Idiot nor Drunken Angel gets a mention. This is of course understandable already for the constraints of space and time alone.

Beyond these primary audiences, the book could be of interest also to anyone interested in the legacy of the atomic weapons, or the postwar rebuilding of Japanese society and identity. Even if both his theme and the method with which he approaches it are challenging, Deamer writes fluidly, organises his thoughts clearly and displays a profound familiarity with the films that he has chosen as his examples. As a result, the book is a thoroughly pleasant, if demanding, reading experience.

David Deamer’s Deleuze, Japanese Cinema, and the Atom Bomb: The Spectre of Impossibility is available from bookstores, including Amazon.com and Amazon.co.uk.

Very informative, thanks. I have always thought “I Live in Fear” is an incredible film but the Japanese and Americans preferred “Godzilla”.