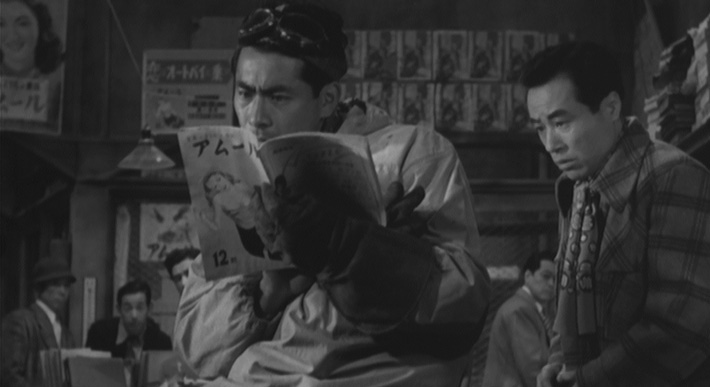 In today’s Akira Kurosawa related news roundup: an article on Dreams, drawings, a statuette, some history, events, and (of course) the latest The Magnificent Seven news.

Let’s start with something beautiful. Over at Movie Mezzanine, Godfrey Cheshire writes wonderfully about Kurosawa’s Dreams, approaching it as a film where “every element of cinematic storytelling feel newly invented” while it “is also the testament of a venerable artist at his peak, one with much still to say but with nothing left to prove”. Good stuff.

In visual arts, we have illustrator KasaiX3’s quite wonderful rendering of an iconic shot from Rashomon.

We also have illustrator and comic book artist Ron Salas’s equally wonderful drawing of a scene from Seven Samurai. Note that you can click below the image for a larger version of the image.

A tumblr blog called Columnated Ruins Domino has quite a lovely four photo series of a pensive Akira Kurosawa as photographed by Roger Ressmeyer around 1980. The last picture is familiar, but I don’t think I have come across the others.

Meanwhile, Twitter user @Mulboyne has posted a great picture of a queue for a screening of Kurosawa’s Seven Samurai in 1954. Take a moment to think about being in that queue, waiting to be among the first to see this new film from this quite promising Kurosawa guy. Will it be as good as his previous film Ikiru? Maybe you are a little worried if he can do a samurai film. After all, his only real attempt in the genre so far has been Rashomon, and that was just weird. Although I hear foreigners liked it. Foreigners are strange.

Speaking of strange, I’m not entirely sure what this next one is, but it’s called The Ghost of Kurosawa, and it will be available later this year. It’s a figurine, I think.

In performance news, David Gaines is again performing his Seven Samurai based solo mime comedy show 7 (x1) Samurai. I’m not sure if he ever stopped, but I haven’t seen it mentioned for a few years until a brand new review at Orlando Weekly. For some more information about the show, check out davidgainesperformance.com.

If you are in Japan and speak Japanese, check out Kyōko Kagawa‘s public talk in Kamakura. The legendary actress gave memorable performances in five of Kurosawa’s works, from The Lower Depths (1957) to Madadayo (1993), and has also appeared in films like Mizoguchi’s Sansho the Bailiff, Ozu’s Tokyo Story and Koreeda’s After Life. In other words, if you watch her filmography it’s almost like going through the canon of Japanese post-war cinema. Advance tickets are already on sale and more information can be found here.

And finally, in the obligatory The Magnificent Seven remake news, the film has lost its villain and then gained a new one, as Peter Sarsgaard takes over the role to which Jason Momoa was originally attached. Also Matt Bomer has joined the cast. The Antoine Fuqua directed now features an even more impressive gang of actors, including the above mentioned Sarsgaard and Bomer, as well as Chris Pratt, Denzel Washington, Ethan Hawke, Vincent D’Onofrio, Byung-hun Lee, Wagner Moura and Haley Bennett.