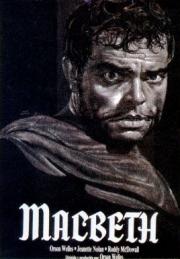 Following the admittedly rather quiet film club month for Throne of Blood, we move to the last film club edition of the year. This time, it is Orson Welles’s turn to for a Shakespeare adaptation with this 1948 film Macbeth.

While the content of Welles’s version is arguably somewhat closer to Shakespeare than Kurosawa’s, it is not necessarily so in terms of the work’s meaning. The differences between the two films and their relationship with their source material are in fact pretty interesting. Welles’s Macbeth is to a fair extent a noir film, and although this may be more pronounced in its visual than narrative aspects, it could be argued that it shares noir’s concerns also thematically, concentrating on questions of society and the human psyche. In comparison, it could similarly be said that Kurosawa’s Throne of Blood is less concerned with individuals and society, and moves on a more universal level, being more concerned with the question of the nature of nature itself.

One aspect in which this could be said to be reflected is the depiction of the witches, and how the two directors chose to make use of them. While in Kurosawa the witch character can be seen as inhabiting the domain of the supernatural, in Welles the witches rather appear unnatural, representing paganism and eing contrasted with the character of the priest, which Welles introduced to the story.

This is of course only one way to approach the two films, and it would be interesting to hear your take on the above.

Other things to compare in the films are the camera and acting techniques and the use of interior and exterior spaces, which both directors utilise quite masterfully. Yet, both Welles and Kurosawa make many of the outdoor scenes look surprisingly staged, perhaps as a nod to the source materials. Although at least in Welles’s case also budgetary reasons may well have contributed to this aspect of the work, with the film having been shot on a relatively small budget in just a little over three weeks.

There is of course much more to be said about Macbeth, which was Welles’s fifth film, made when the director was still only 33 years old. It was not even the first time that he had tackled the story professionally, having already staged Macbeth twice (1936 and 1947) with an all-black cast in the so-called Voodoo Macbeth performances. It would not be the last time that he worked on a Shakespeare play either — his very next directorial work following Macbeth was Othello (although he did act in a number of films between the two, including Carol Reed’s The Third Man).

I do hope that you find Welles’s Macbeth as interesting as I do. The film is widely available, with North Americans having both DVD and Blu-ray versions available, while European based fans have to make do with a DVD.

Also, in case someone else is up for it, it could be interesting to watch also Roman Polanski’s Macbeth from 1971. I have not yet seen it, but it is supposedly rather dark, and at least partly so because it was his first film since the brutal murder of his wife by the Manson Family.

In January 2013 we will be continuing with film adaptations of theatre classics, this time watching Kurosawa’s The Lower Depths. For the full film club schedule, take a look at the film club page.

Its been a while since I’ve seen Welle’s Macbeth, but I enjoyed it a lot (I confess I’ve never seen it on stage or read the play). Watching it after Throne of Blood, the things which struck me were:

1. The ‘moving forest’ sequence was so similar I wondered if Kurosawa had seen it.
2. Throne of Blood is vastly more cinematic, I know Welles was constrained by the budget, but it often seemed much more studio bound.
3. I have no idea why Jeanette Nolan was cast as Lady MacBeth, she seemed wildly out of her depth, to the extent that it nearly spoiled the whole film for me.

Glad you liked it, Ugetsu! I watched it again last night and quite liked it, apart from Welles’s nipple shirt, which for some reason bothered me quite a bit during the first half of the film: 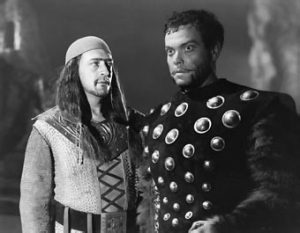 This is the third Welles film that I have seen recently, following Citizen Kane and The Magnificent Ambersons. The latter I had not seen before and really liked. Like The Idiot, it is famously a book adaptation almost cut in half by the studio, but I thought that it still worked surprisingly well. The way it was presented, with Welles’s voice over narration and the way the end titles were handled, was brilliant. As we know, The Idiot has sometimes been called “a book filmed”, but I think The Magnificent Ambersons is more like that, and it does it really well.

I’m hoping to see more Welles in the coming months, rewatching what I have seen before and getting hold of the ones that I never saw before. The availability looks much better than what it was in the mid-90s when I last did a Welles binge.

I’m not sure if Kurosawa had seen Welles’s Macbeth, but I think that he had, and I know that he was at least aware of it, as I remember that he had wanted to make his own Macbeth already in the late 40s, but had decided against it then because of Welles’s film. I think this was mentioned in Richie, but I’m not sure, and I’m not at home so can’t check.

You are right that Welles’s Macbeth is for the most part visually strongly sound stage bound. I actually have the feeling that he may have intended it like that, to make it something like a “filmed play” than a “film adaptation of a play”, although budget considerations probably influenced this artistic direction, if it indeed was deliberate. When I first saw the film some ten years ago, I remember being a little disappointed by this aspect of the film, but have since actually come to like it.

It’s interesting that you were so bothered by Nolan. She has never bothered me, and I actually quite like her performance. When I watched it now, I gave her performance special attention, and it’s true that hers is not the most versatile or complex performance in the film, but I didn’t really notice anything that I would fault her about.

I’m currently on a somewhat lengthy work trip, and prepared for it by taking with me all the Macbeth films that I could get hold of. I started by watching the early 80s BBC Shakespeare edition of Macbeth a couple of evenings ago. Last night, it was Welles. Tonight, if I have the time, would be Throne of Blood. Then Polanski’s Macbeth, followed by the late 70s performance with Ian McKellen and Judy Dench from the Thames Shakespeare Collection (probably the definitive version captured on film?). After that, the 2001 film Scotland, PA, and finally the Indian adaptation Maqbool.

If have the time and energy, that is. It may be that by the time I get to Polanski, I’m too full of Macbeth for the time being, however much I love the play!

I watched it again last night, and I realise now that the version I saw before was the hacked up studio version – the ‘real’ one is 20 minutes longer. The longer version is much, much better (especially as the new released version has been cleaned up and restored).

I disliked Nolan less this time – but I agree with some of the critiques that her performance seemed to fall between a number of stools. I’m certainly no expert (although I hope to watch a few more versions of Macbeth when I get the chance, especially the Polanski one), but I think most performances emphasise one or other interpretations of her character (and there seem to be many). I much prefer the stylised malignity of Lady Washizu. Having said that, I think that many of her poor notices at the time were the result of the studio cut taking out many of her scenes.

I really liked the staging, although I don’t think Welles quite pulled off a successful ‘cinematic play’. Sometimes I wished that he would give us more close-ups, and sometimes I missed the expansiveness of Kurosawa. I am more convinced though that Kurosawa did indeed see this film – there are echoes of it in the horse riding scenes and in the moving forest scene. I can almost hear Kurosawa watch it and think ‘very good, I like that, but it needs to be bigger, bigger!’

It does seem to me that both Welles and Kurosawa were trying to do the same thing – create cinema without losing the theatrical roots of the film. Most film makers seem to go one way or another – either attempting to ‘open out’ Shakespeare in order to make a cinematic experience, or just emphasise the theatricality and the words. I would classify Welles attempt as a excellent try, which doesn’t quite succeed. Kurosawa, in comparison, got it spot on. Of course, Kurosawa was aided by not being trapped by the language and tradition of an English speaking director.

I’m hoping to see more Welles in the coming months, rewatching what I have seen before and getting hold of the ones that I never saw before.

Sorry, I don’t think I’m going to have time for Macbeth. I’m sorry I didn’t find time to sit down and watch Throne of Blood again last month, but I’m not sure I would have come up with more to say about it than what has already been said.

Oh well, my two and a half week work trip left me very little time or energy to do anything, so I didn’t progress beyond Welles’s film in my Macbeth marathon. Maybe some other time.

Touch of Evil is certainly on my list to watch. Compulsion wasn’t, as it’s not directed by Welles, but I can certainly watch it anyway. 🙂

Fun fact: Compulsion was directed by Richard Fleischer, who was to be Kurosawa’s American counterpart for Tora! Tora! Tora!, to Kurosawa’s great disappointment. Kurosawa apparently called Fleischer “the micro guy” (in reference to The Fantastic Voyage, which he disliked) and later “the ketchup guy” (apparently, Fleischer used more ketchup with his meals than Kurosawa considered necessary).