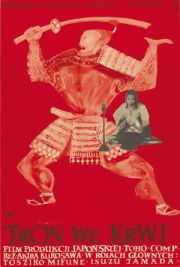 For our Akira Kurosawa film club, the rest of the year will be full of sound and fury, with hopefully plenty of debate about the level of significance that it carries. In other words, this November we will be discussing Kurosawa’s 1957 film Throne of Blood (literally “Spider Web Castle”, 蜘蛛巣城), which is based on William Shakespeare’s Macbeth, just like the film that we will be watching in December, which will be Orson Welles’s Macbeth.

One of the most highly regarded of Kurosawa’s films, Throne of Blood transports Shakespeare’s play into medieval Japan and in general handles its source material fairly liberally. In addition to the discussion found in the typical Kurosawa books, much has been written about the film also by literary critics and Shakespeare scholars, and I would especially recommend Mitsushiro Yoshimoto’s fairly brief but precise and at times critical summary of the main threads of this discussion.

One of the central topics in the evaluation of Throne of Blood has of course been its comparison with Shakespeare, not least because of the fairly large differences despite the two featuring largely similar main story lines. Many have also written about Kurosawa’s use of Noh and Buddhist elements, how the story relates to post-war Japan, and how Kurosawa replaces Shakespeare’s text with his own visual poetry. In terms of visuals, it has been noted that in Throne of Blood Kurosawa’s camera stays for the most part fairly remote, with close-ups few and far in between. This somewhat alienating style has been compared to the cinema of Kenji Mizoguchi (see for instance Goodwin, 190).

In terms of specific companion films, Kurosawa’s Throne of Blood is obviously related to a whole range of other Macbeth adaptations, including the one by Orson Welles which we will be watching next month, and whose release in 1948 reportedly caused Kurosawa to shelve his project when he first considered it in the late 1940s. Meanwhile, the Kurosawa films most closely related to Throne of Blood are probably Ran and Record of a Living Being, which both present a world arguably very similar to that of Throne of Blood in their darkness, alienation and apparent hopelessness.

Throne of Blood has of course been the topic of earlier discussion here as well, and most of that discussion can be found here.

At the time of its release, the critical response to Throne of Blood in Japan was “mixed to positive” (Galbraith, 238), and the film was only modestly profitable. Overseas, Throne of Blood has largely been a critics’ darling since its release, and is often listed among the best Shakespeare films of all time.

I saw an explanation of the historical background to Macbeth on Tumblr recently and wanted to share it here. It clears up a lot of the reasons behind Lady Macbeth’s actions and statements. Not all of them were brought over to Throne of Blood, but they’re still of interest as an influence.

Lawless, thats really interesting. I’ve read quite a bit of medieval Irish/Scottish history as well as the history of the Dark Ages and it is all very Game of Thrones in terms of bloodlust. The maiming and murder of children was quite common if they were deemed to be a threat simply because of bloodlines. And as we saw in Ran, this was also a feature of late medieval Japan. And of course when you combine the absence of direct power for women in those societies, the role of their children became central to those womens ambition and status – in some cases of course children were put on the throne as a means for the women to wield direct power. Although strictly speaking, within Irish/Scots societies it was not out of the question for a woman to wield direct power – Shakespeare would no doubt have been aware of Grace O’Malley, a very powerful Chieftain in the west of Ireland who was something of a thorn in the side of Queen Elizabeth (not to mention a certain Mary, Queen of Scots).

I’m pretty sure Kurosawa was quite conscious of this (if not the exact historic context) when making Throne of Blood, as with Ran of course he fleshed out the sexual politics behind dynastic feudalistic politics in much more detail than was explicitly set out in either Macbeth or King Lear.

Thanks lawless, that was an interesting read!

Although I must add that both my memory and Wikipedia would suggest that Lady Macbeth is in fact a composite of at least two historical characters, so it’s not necessarily a direct one-to-one correspondence with Gruoch of Scotland like the linked article suggests.

In any case, knowing the historical background definitely offers some valuable insight into the character’s actions and motives.

Thanks for the clarification, Vili. Since posts there usually originate with a single individual with an interest in the material (often as a hobbyist as opposed to a professional or scholar) and no editor, It’s not as reliable a source as Wikipedia. We all know Wikipedia is a good starting place that is usually not wildly inaccurate, but can’t be taken as gospel either.