‘Throne of Blood’ to be adapted on stage 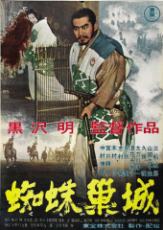 The Oregon Shakespeare Festival has announced its 2010 lineup, which will also be the festival’s 75th season of Shakespeare productions.

Among the more typical Shakespeare productions prepared for next year’s festival is Throne of Blood, a stage adaptation of Kurosawa’s film, which of course itself is based on Shakespeare’s Macbeth. The play will be adapted and directed by the acclaimed American theatre artist Ping Chong. Very little other information is at this point given about the production.

The Oregon Shakespeare Festival will run from February 19, 2010 until October the same year.

Incidentally, starting next week Throne of Blood is also our Online Film Club‘s movie of the month. Let’s see if we can beat the amount of discussion that has been devoted on Dersu Uzala this month!