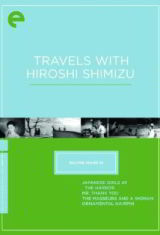 December’s Film Club features are two of Hiroshi Shimizu‘s (1903-1966) films from the turn of the 1940s. Shimizu is not as well known today as some of his contemporaries, but in his own time he was considered one of the most respected film makers in Japan. We already had two of his films on the list in October. Let’s see if the December films generate more discussion!

The Masseurs and a Woman (Anna to onna) was released in 1938, and depicts a story of attraction, loneliness and human connection as “seen” through the characters of blind masseurs working at a mountain retreat. The film is 66 minutes long, and in my personal opinion is the strongest one of the four Shimizu films on our film club list.

The second film, Ornamental Hairpin (Kanzashi), is a wartime romance from 1941, also taking place at a mountain retreat. The film is 70 minutes long.

Both films can be found from the Eclipse box set titled Travels with Hiroshi Shimizu.

In January, we will be returning to Kurosawa with No Regrets for Our Youth, his first post-war film. For a complete schedule of the film club, see here.

Seems there is not much interest in Shimizu!

My excuse is that despite ordering my copy in late November from Amazon, it still hasn’t arrived. According to the tracker it left New Jersey 10 days ago…. its stuck in the snow somewhere I guess.

Anyway, Happy Christmas and a prosperous New Year to you all. I’m trying to think now which is the most Christmassy AK film to watch on a Christmas Eve…

There’s always Scandal, with its Christmas Eve scene. But if you have the time, rewatching Seven Samurai might be more rewarding. 🙂

Merry Christmas and a Happy New Year, everyone!.

I must say that while the Shimizu films have been quite entertaining to watch, I struggle to really find much to say about them. They seem well crafted to me, and the stories are nice, especially The Masseurs and a Woman, but they seem to lack a certain depth, or alternatively I as usual lack the ability to see their depth.

In any case, happy Yule-tide everyone! My Christmas present for myself this year was a Samsung Galaxy S smart phone, a somewhat forced choice as I dropped my previous phone into the sea a few months back, and although I managed to fish it out, it never quite functioned properly since. In any case, the new phone is a fun gadget, so it’s all good.

On the downside of things, I have also learnt this Christmas that a stomach flu and a fractured rib are not a good combination!

On the downside of things, I have also learnt this Christmas that a stomach flu and a fractured rib are not a good combination!

Sounds painful Vili, hope one or both problems heal up before New Year!

Thanks Ugetsu. Stomach’s actually doing better already, although the true test will come today as I’ll be joining a friend at one of those conveyor belt sushi places.

The rib is a bit of an annoyance though. Sometimes I think that playing soccer does more harm than good to me. This is an injury I picked up a couple of weeks ago.

Typical – my Shimizu boxed set arrived today on the 31st! I won’t get a chance to look at any of the films for a few days I think.

I know its just outside the month and only Vili seems to have watched the films, but I couldn’t resist watching them back to back this morning (not a bad hangover cure, especially when you watch them drinking coffee, with a grapejuice/leftover Cava cocktail).

Like Vili, I found both films very enjoyable. They are both essentially light comedies with a somewhat acerbic note, especially ‘Ornamental Hairpin‘. Shimizu seems to have shared a sensibility with Ozu, as a sort of downbeat observer of human foibles.

– I was surprised at how little music there was on both films. Shimizu seems to have preferred no music at all, with just a very light note at dramatic points near the end. I found that quite curious in such light hearted films, but its effective I think at focusing the audiences attention on the characters. In particular, in ‘Masseurs’, we ‘hear’ things going on in the way the blind characters do (in fact, I thought this was the purpose of no music, until I realised that Ornamental Hairpin used the same technique).

– While Ozu of course was famous for his minimalist camera movements, and Naruse for his rapid editing, Shimizu favoured lovely tracking movements, not unlike Mizoguchi (or indeed Kurosawa, in his early films). The result gives a notably vibrancy and beauty to the scenes, its very effective and for me, gives the films quite a ‘modern’ look.

– His films seem very much to be read quite literally. They seem not to have any metaphorical or allegorical meaning or to have much in the way of satire – they are simply slices of life. There is a scene in Ornamental Hairpin where a soldier injured by the hairpin needed to be helped over a narrow bridge by a woman. The whole scene I found quite odd, and I was wondering if it was a sort of sly dig at the macho posing of wounded soldiers, or perhaps it was subtle propaganda (the film was made after the outbreak of war, and had to go through rigorous censorship).

– One fascination with the films is in seeing so many familiar faces from later films in their youth – I know Coco will appreciate this in particular! In particular, Chishu Ryo is very young in ‘Ornamental Hairpin‘ and seems quite the glamorous young star – amazing that it was only 6 years or so later he was playing the old man in Tokyo Story!

– Shimizu seems to have one thing in common with Naruse – a fascination with his female leading ladies resulting in them tending to dominate the films, possibly at the expense of the overall balance of the storyline.

The finest scene in the two films, and one that makes watching them worthwhile alone, is in The Masseurs and a Woman. In it, a blind masseur, walking on a street, passes a mysterious lady he has previously met. He said to his friend earlier that she ‘smells of Tokyo’. He stops, realising he has caught her scent, and she stops, realising it too, but does not speak to him. They both move away from each other slowly, he, seemingly enraptured with her scent, she, stunned at his reaction. The amazing thing about the scene is the way she is caught in a shallow focus, with the beautiful streetscape around her seeming to blur in the distance. We ‘see’ her as the blind man sees her. Its quite remarkable, and shows that Shimizu was more than an average film maker.

Thanks for your views on the films, Ugetsu! Your response to the films seems quite identical to mine, and the label “slices of life” seems very accurate indeed. There is a certain charm to them for sure.

And the scene that you mention is indeed memorable, almost magical. I must say that I had to watch it again to really notice the blurring that you mention — I must have been quite caught up in the moment to not make a conscious note of it when first watching the scene!

There is a strong theme of a need of human connection in The Masseurs and a Woman, which I find fascinating, although at times it feels to me that I need to read more into the film than the film itself provides to truly appreciate the work.