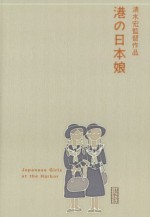 Hiroshi Shimizu (1903-1966) is not as well known today as some of his contemporaries, but in his own time he was considered one of the most respected film makers in Japan. As Criterion recently released a compilation of his works under their Eclipse series, I thought that we could take a look at the film maker’s works from the 1930s and early 40s.

The Eclipse box set is titled Travels with Hiroshi Shimizu, and to explain the title Criterion describes the director as a “curious, compassionate storyteller who was fascinated by characters on the outskirts of society, Shimizu used his trademark graceful traveling shot to peek around the corners of contemporary Japan. In these four lyrical, beautifully filmed tales, concerning geisha, bus drivers, and masseurs, Shimizu journeys far and wide to find the makings of a modern nation.”

Of the four films we shall be watching Japanese Girls at the Harbor (1933) and Mr Thank You (1936) this month, and the other two about a month from now. They are all fairly short films, only a little over an hour long.

Now, perhaps the films this autumn have not been interesting enough, or everyone has been as busy as me, but there has been something of a lack of discussion here in recent months. As I feel that one contributing factor may be the speed in which we are moving, I will now be seriously considering moving back to a “one film per month” schedule, starting next month.

In any case, The Men Who Step on the Tiger’s Tail will be on starting November 1.

Yeah, sorry I’ve been a no-show for a while, but I got tied up in a lot of things and haven’t had a chance to pick up the Eclipse boxset yet. I’ll get caught up on everything in November.