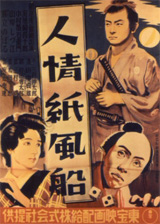 Our online film club‘s journey through Kurosawa related cinema continues for the next four weeks with Sadao Yamanaka‘s 1937 period drama Humanity and Paper Balloons, which many critics and film makers including Kurosawa himself have listed as one of the most influential Japanese films of all time.

The ensemble film, somewhat reminiscent of The Lower Depths, is perhaps best described as a dark, pensive and realistic “presentation of a world in which the martial codes of bushido no longer have any meaning” (Tony Rayns, 2005). Mimura Shintaro’s script was based on the kabuki play An Old Story About a Wet-Wadded Silk Coat (Tsuyu Kosode Mukashi Hachijô, a summary of which can be found here), but was heavily reworked. In Rayns’s view, whose essay I would call recommended reading, the story became through these changes a commentary of the rising “militarism and the worsening impoverishment of working-class people in the 1930s”. The seriousness of the film’s approach to the period film genre was also highly influential, Richie in his A Hundred Years of Japanese Film calling Yamanaka possibly “the finest of the directors of the new jidaigeki” of the late 1930s, whose “ambition was to further modernize the period picture”. (71)

Humanity and Paper Balloons was actually the last of Yamanaka’s 24 films, three of which have survived to us. The number of films he directed is impressive, considering that he was less than half a year Kurosawa’s senior and died more than four years before the latter’s own debut film. Yamanaka’s career in total lasted for only seven years. A draft note arrived to him on the day Humanity and Paper Balloons premiered (or possibly on the next day, depending on whose version you believe), and the young director would be dead a little over a year later in a Japanese field hospital in Manchuria of an inflammation of the intestines. News of the 28-year-old’s death left the Japanese film industry grieving, not least Yamanaka’s close friend Yasujiro Ozu. 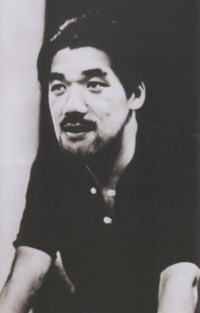 Sadao Yamanaka, who based on his dressing style was
most probably simply a time traveller from the 1990s.

Based on the little I have read about Yamanaka (the Master of Cinema booklet is a good place to start, as is the Richie book mentioned above and Wikipedia), he comes across as a quiet man, yet one who knew what he wanted from his work; one of those free spirits whose life and career was cut off tragically by forces out of his control. I will leave you with the intriguing last will and testament that he wrote while in the army, and which is printed in the Master of Cinema booklet:

THE LAST WILL AND TESTAMENT OF
YAMANAKA SADAO

I have nothing to say as an Infantry Corporal in the Japanese Army. I have done my best as such.

A word as a member of the Association of Film Directors in Japan:

If Humanity and Paper Balloons should prove to be the last film by Yamanaka Sadao, I would feel a little aggrieved. It is not a loser’s grief.

All my insurance money goes to Mr. Inoue Kintaro.

I am very sorry that Mr. Inoue has to take the trouble for me. Pay all my debts at P.C.L. [film studio which would later become Toho] and Naruse, the restaurant. Probably my money will not cover them all. Cheat them to make them content with the result.

If there should be a surplus, share it among the Association and the Zenshin-za [a left-wing theatre group with whom he made two films, including Humanity and Paper Balloons].

Lastly, I say to my seniors and friends:

Humanity and Paper Baloons is available in region 2 (Europe and Japan) DVD from Amazon.co.uk. Unfortunately, I have no knowledge of releases in other regions, but you can always check if your stand-alone player can be made region free with a simple press of a button (try videohelp.com), or you can try to modify your computer’s DVD drive with software like AnyDVD.

Finally, don’t forget that a little over two weeks from now, on August 1, we will be beginning our silent Ozu month, with Yasujiro Ozu’s Tokyo Chorus (1931), I Was Born, But… (1932) and Passing Fanzy (1933). All films are conveniently available in Criterion’s region 1 (North America) silent Ozu DVD box set, in case you need to rent or purchase them.

More information about our film club, including the full schedule, can be found here. Join the discussion!