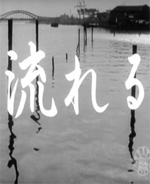 Kaboom! And thus begins our new adventure into the world of non-Kurosawa films — not with a whimper but a good, solid, manly macho bang. Not that the film in question, which I have never seen, probably starts that way. In fact, it’s supposed to be anything but macho.

What the heck am I talking about? Well, those who follow the discussion section of this website are probably already aware of the fact that there has been much demand for a parallel film club that would run together with our ongoing Akira Kurosawa film club. And unlike the Kurosawa club, this parallel film club would discuss films somehow related to Kurosawa, but not made by him. And it’s the start of that non-Kurosawa club that I’m celebrating here with my manly, macho bang.

Which, as I already mentioned, is almost completely inappropriate, as our first film will be Mikio Naruse‘s 1956 film Flowing, a story of a group of women in what is a women’s world. This geisha film, based on a novel by Aya Koda (herself a one-time maid in a geisha house), was made the same year prostitution was outlawed in Japan.

The film was chosen for us by Ugetsu, and the reasoning here is that its theme and ensemble cast of women will give us a good comparison point with Kurosawa’s The Most Beautiful, which is the film club’s Kurosawa film of the month. The plan, you see, is to continue running the Kurosawa film club chronologically with a new Kurosawa film introduced at the turn of every month, and a complementary non-Kurosawa film introduced on the 15th of that month. For more about our film club, including links to past discussions, see here.

A month from now (starting on July 15), we will be discussing Sadao Yamanaka‘s highly influential 1937 classic Humanity and Paper Balloons. The rest of the schedule is still being negotiated.

So, join the discussion, both for Naruse’s Flowing as well as for the non-Kurosawa film club schedule!