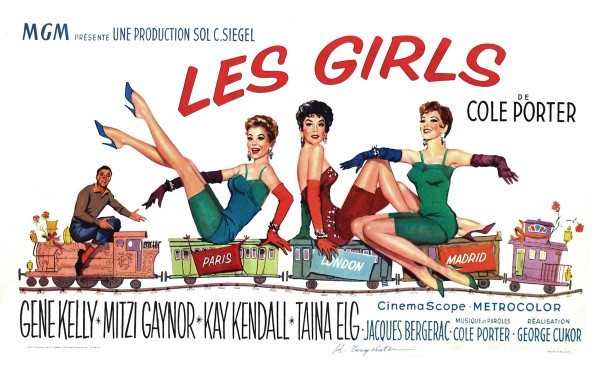 When a former dancer publishes a tell-all book about her days in a dance troupe, she is sued by a fellow dancer who has a different recollection of the events surrounding a love affair with the troupe’s male dancer. In the resulting trial we are given three different versions of this single narrative that do not agree with one another, leaving us uncertain of what really happened.

The film stars Gene Kelly, Kay Kendall, Mitzi Gaynor and Taina Elg. It was written by John Patrick, based on a story by Vera Caspary.

We are watching Les Girls as part of our exploration of Rashomon, which started in August with Rashomon and continued last month by looking at The Usual Suspects. Unlike The Usual Suspects which borrows only one feature of Kurosawa’s film, Les Girls utilises its structure more fully.

Dolores Martinez, in her discussion of Rashomon remakes, argues that Les Girls (alongside the Italian film Four Times That Night) is in fact a truer example of a Rashomon permutation than the faithful remakes such as the 1964 The Outrage, for it displays a closer relationship with Kurosawa’s film.

While Kurosawa gives us a film about the chaos that ensues when everyone tells their version of the truth, Cukor gives us a rather different film about how relationships are maintained by the lies we all agree on. Marital discord occurs only when competing narratives are examined and compared, something that happens especially, it is implied in the final scene, when a woman wants to discuss a man’s fidelity or lack of it. Moreover, anticipating Lerner’s and Lowe’s bittersweet duet, I Remember It Well, from Gigi (Minelli 1958), this film makes a point about the different ways in which men and women remember what is important. It reduces the complex issue of finding the truth about a crime to a sexual comedy, and yet, perhaps because of Cukor’s own concerns with social deceptions, it is a sex comedy with a valid point to make. For the Hungarian based in Hollywood, Cukor [who was homosexual], the human condition was one in which it was necessary to lie in order to survive in a world dominated by an accepted construction of “normal” gender relations; for Kurosawa it was one of guilt redeemale only by accepting one’s responsibilities to other people. No clearer example could be made of how culture, history, and even sexuality can affect the way in which a narrative might be told, reshaped and retold. (68)

So, get ready for some song and dance, then let us know in the comments what you think of Les Girls, its relationship with Kurosawa’s Rashomon and Matinez’s interpretation of the film.

I finally got around to watching Les Girls. I rented a copy from Netflix.

I’m not a big fan of dance musicals, but this movie wasn’t as bad as I worried it might be. I was actually impressed with performances by Taina Elg and Mitzi Gaynor, and a few of the sets were interesting. As the main characters were theatre dancers, there are a few stage numbers, but additionally there are a couple of numbers featured that are delivered by characters when they’re not on stage. In a supplementary feature on the DVD, Cukor is said to have described his movie as not so much a musical comedy but a comedy with musical elements. Not that I would rank Les Girls as a great comedy, but looking at it as Cukor described, I found it entertaining enough

As far as being compared with Rashomon, I initially didn’t think much of the comparison. Of course, it’s not until the second version is presented that a comparison can be made of it with the first version. But the two versions didn’t follow Rashomon‘s pattern in dealing with the same specific event but instead were more general in describing character actions and relationships. The first version is given by the British girl describing the French girl joining the theatre act and developing a relationship with the lead dancer, and the French girl’s reaction to a complication that came up. The second version was given by the French girl discussing the British girl’s alcoholism, the British girl developing a relationship with the lead dancer, the act’s international tour, and the British girl’s reaction to a different complication having come up.

The only way I could see that the comparison of these two versions was like Rashomon was that the reaction each girl had to the complications that had arisen were the same except that each character was in the other’s place. There were other differences, such as how the characters were described overall; for example, the British girl didn’t mention her alcoholism, and the French girl described herself as more down-to-earth than the other girl described her. Because only their last actions were described similarly, I felt that the movie wasn’t Rashomonesque but was the telling of two separate stories, and that only the end of each story was what was questionable as to validity.

It wasn’t until the third version was presented, by the lead dancer character, that I decided that this film really can be described as Rashomon-like. The third version showed that both of the earlier versions had elements that were true, elements that were not completely true, and an explanation of what really occurred at the end of each story. It’s not to say that each girl lied about what happened (although each admitted having slightly done so to their own spouses), but it was just that neither knew exactly what really had occurred. After the third version was presented, all’s well that ends well … then again, how do we know that the third version presented wasn’t a lie also?

So, I’m admitting to being won over in saying that Les Girls belongs to the grouping of films that can be compared to Rashomon (actually, I believe Les Girls is more like Rashomon than The Usual Suspects is).

So, I watched Les Girls now and I must say that both my expectations and my reactions are very similar to jesgear’s above. I think that the third version of events is just as much of a deliberate lie as the first two, so we don’t ever get to know what really happened.

It’s a fun film though, I quite enjoyed it.