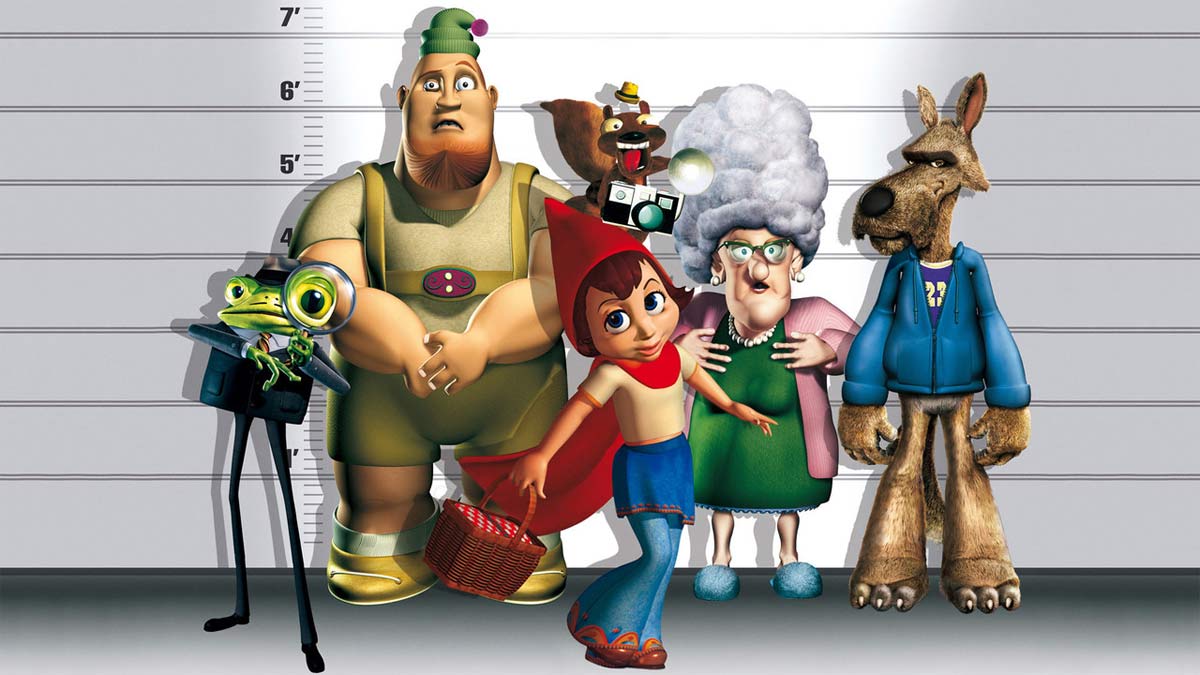 Our film club’s Rashomon series continues this month with the 2005 animated feature film Hoodwinked! which is a healthy mixture of Kurosawa’s film classic and the equally classic Little Red Riding Hood story. A bit of the Usual Suspects is thrown in as well, as you can see from the image above.

Hoodwinked! was written and directed by Cory Edwards, Todd Edwards, and Tony Leech, with the Edwards brothers the only ones with any real previous feature film experience, having worked on the 1999 film Chillicothe. Hoodwinked! was one of the first computer animated indie films, which gave the team more creative control but also stricter budgetary limits. Produced with only around $8 million dollars, the team’s approach to the art was influenced by the budget and resulted in a slightly stop motion type of design.

Although Hoodwinked! received a mixed reaction from critics at the time of release, the film was a major box office hit for its indie producers and the Weinstein Company which distributed the film, earning over $100 million. A sequel, Hoodwinked Too!: Hood vs. Evil, was released in 2011.

Let’s get the discussion going!

I just watched it on Netflix. Its kinda fun, but I couldn’t help wonder all the way through it just how fast animated films have come on in such a short time – I know there were budgetary issues with the film, but the animation really is distractingly crude. They obviously put more work into the voice acting (which is generally very good) and music than the visuals.

There is an obvious Rashomon thing going on here, but I couldn’t help thinking that it is more influenced by traditional detective stories than Rashomon – the only ‘nod’ to the AK film I think is the use of a woodcutter and forest setting.

I think in these films we’ve seen a clear distinction between what might be called the ‘he said, she said’ style of traditional whodunnits, and a ‘subjective/objective’ type approach. Superficially, they seem the same, but a a deeper philosophical level, they are entirely different storytelling perspectives. I suppose the difference is that in the former, there is a ‘truth’, while in the latter, there isn’t.

Just doing a test here – I’ve been trying to post a new thread and it vanishes when I press ‘submit’.

Oh dear! I’ll try to look into it in the weekend. I’m currently on the road.

I hope you didn’t lose any work!

Its ok, I saved it, I’ll post again when the problem is fixed.

I found your post and published it. I may also have found the reason for the problem. Let me know if it continues!

As for Hoodwinked!, I really quite like it. Unlike The Usual Suspects where everything is given from just one point of view, Hoodwinked! actually offers multiple interpretations of scenes from different perspectives — take for instance the first meeting between the Little Red Riding Hood and the Wolf. There is perhaps somewhat less philosophical depth to it that what Kurosawa is doing (or is there — is Kurosawa’s film really particularly deep in the end?) but I definitely think there’s more than just a superficial link between Hoodwinked! and Rashomon.

I did enjoy Hoodwinked!, even if it lacked the real inventiveness of the best of modern animated films. Perhaps I’m being a little unfair on the film makers, but I did interpret the wavering perspective of various versions as being more to do with narrative clumsiness than a genuine desire to explore subjectivity. Perhaps I need another look at it…