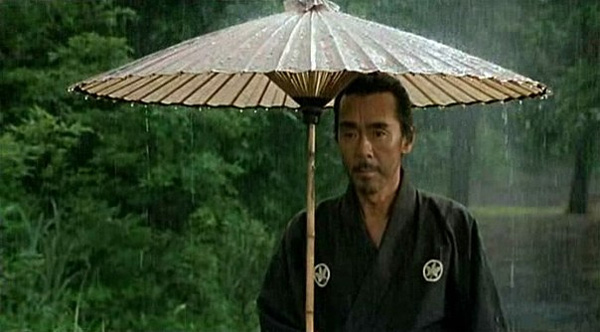 Following our last month’s viewing of Akira Kurosawa‘s final film Madadayo, our Akira Kurosawa film club continues with After the Rain, the first movie posthumously filmed from a screenplay that Kurosawa left behind.

After Kurosawa’s passing on September 6, 1998, wheels were fairly quickly put into motion to produce After the Rain (Ame agaru), a film conceived as an homage to the late director. The film was produced by Kurosawa Production Co and helmed by Kurosawa’s long-time assistant director Takashi Koizumi. It featured many of Kurosawa’s regular cast and crew members, with the leading role of a masterless samurai played by Akira Terao who had earlier appeared in Ran (as Taro, the oldest of Hidetora’s sons), Dreams (as “I”, the dreamer) and in Madadayo (as Sawamura, one of the students) and who continues to be an on-demand actor to this day. Ran‘s Lady Sue, Yoshiko Miyazaki, appears as the ronin’s wife, while Hisashi Igawa (Dodesukaden, Ran, Dreams, Rhapsody in August and Madadayo), Hidetaka Yoshioka (Rhapsody in August and Madadayo), Mieko Harada (Ran and Dreams) and Daisuke Ryū (Kagemusha and Ran) all have roles in the film, as do many other familiar faces, including Tatsuya Nakadai (6 Kurosawa roles) in a brief cameo as a fencing master.

The film was shot by Kurosawa’s longtime cinematographer Shōji Ueda with another regular cinematographer Takao Saitō working as a consultant for the film. Production design was by one of Kurosawa’s most frequent collaborators, veteran designer Yoshirō Muraki who had worked on no less than 19 Kurosawa films in his career, while overall assistant, organiser and art direction duties were carried by Kurosawa’s trusted aide Teruyo Nogami, who had worked with Kurosawa practically non-stop since Rashomon. The film’s score was composed by Masaru Satō (ten films for Kurosawa between Seven Samurai and Red Beard), who died on December 5, 1999, only two months before the film’s release and with After the Rain remaining his last film score.

Kurosawa’s family was also an integral part of the process. His son Hisao, who was now running Kurosawa Production Co, functioned as the producer, as he had with Kurosawa’s final films, while Kurosawa’s daughter Kazuko handled costume design, as she had done with Rhapsody in August and Madadayo.

The film’s screenplay, which had been written by Kurosawa alone, was based on a book by Shūgorō Yamamoto, on whose works Kurosawa had also based Sanjuro, Red Beard and Dodesukaden, as well as his other posthumously filmed screenplay, The Sea Is Watching, which we will be viewing next month. Bearing some tonal similarities with Sanjuro, After the Rain is a fairly quiet story about am easy-going masterless samurai and his wife who find themselves stranded at a small country inn when heavy rains cause a local river to flood. The film explores the tender relationship between the samurai and his wife, as well as the less tender conflict which develops between him and a local lord, played by Toshirō Mifune‘s son Shirō Mifune.

The fairly low budget (estimated $3.8 million) After the Rain premiered at the Venice Film Festival in September 1999, going on wide release in Japan on 22 January 2000. The film earned an exceptionally warm reception around the world, winning numerous international awards, and although not a perfect film, it remains a competent and loving homage to the late director.

After the Rain is widely available on home video in its home country and at least some of the Japanese releases come with English subtitles. For more information on the film and other films with Kurosawa’s involvement, see here.

So, what’s you view of After the Rain? How do you think it would differ had Kurosawa himself had the opportunity to film it?

So, have any of you managed to get hold of the film? I actually watched it already in May and once again really liked it. It’s a lovely little quiet film that would have continued from where Rhapsody in August and Madadayo left off, had Kurosawa been able to film it. The ending is superb. And there are some clear nods to Kurosawa’s works, with a few scenes that are filmed in a way that clearly reference scenes from Kurosawa’s films.

How the film would differ had Kurosawa filmed it is anyone’s guess. I feel that the relationship between the samurai and his wife might have been explored further, as it feels like there could be more non-verbal exposition. The sword fights might also have been more dynamic. But I think all in all Koizumi did an excellent job as the director.

Some of the performances may be a little uneven, but I think everyone involved with the film can be proud of what they achieved.

It’s not easy to find at all with English subtitles, I really can’t tell from the few sellers if any of the Japanese editions I could actually buy do have English subs , it looks like most don’t.
A friend has hopefully managed to download a fan-subbed version which we’ll watch as soon as we get a chance . But I always prefer to add a real DVD or Blu-ray to my collection if I can.
Which edition did you find Vili ?

I have an old DVD from Japan. I think it’s this one. The description definitely says that it includes English subtitles, as mine does.

I’m not going to link to them and have nothing to do with them, but I just noticed that if you do a YouTube search for “Ame agaru” or “After the Rain”, you can also find the film there. But I don’t see subtitles.

I was unable to get one through my local shop – I ordered one through Amazon, hopefully I’ll have it before the end of the month.

My Amazon delivery just arrived – unfortunately they sent a copy of another film with the same name….

My Amazon delivery just arrived – unfortunately they sent a copy of another film with the same name….

Its a shame – I was actually looking forward to this one, it looks a very nice film.