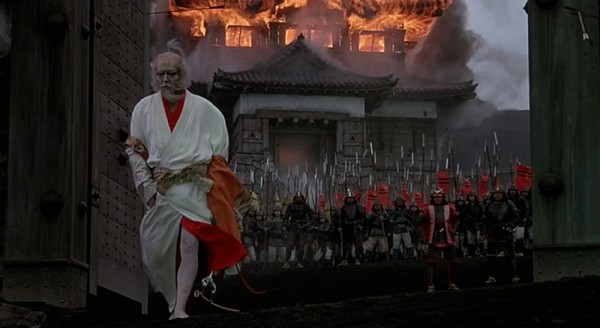 The news about the restored Ran was published on the festival’s official website, although exact dates have not yet been made availale. The website notes that the 4K restoration is scanned from original negatives and restored frame by frame by the French film processing company Éclair. The work has been carried under the supervision of the film’s original distributor StudioCanal and the Japanese Kadokawa Pictures.

The new restoration’s colour grading has been approved by Masaharu Ueda, one of the three cinematographers who worked on Ran and were nominated for an Academy Award, BAFTA and other awards for their work. As there has previously been some disagreement about the considerably varying colour palettes of the film’s various DVD and Blu-ray releases, it can be hoped that with Ueda’s involvement in the restoration proces, a definitive digital transfer has been created which closely matches the original intentions of Kurosawa and his cinematographers.

It seems safe to assume that this new transfer will sooner or later also find its way onto a home video release, possibly first on Blu-ray.

Hopefully if this is a brand new restoration it may tour a few more festivals and maybe do the odd art house cinema run. It’s rare that Japanese films make it anywhere near me for screenings other than the odd Ghibli, but Ran might just be a famous enough title to sneak in.
I was also interested to see two other Japanese titles on the Cannes list;
Zangiku Monogatari (The Story of the Last Chrysanthemum / Le Conte du chrysanthème tardif) by Kenji Mizoguchi (1939 )
which may be the same restoration which is already available on this Blu-ray set
DVD Beaver review
this set is really worth getting it if people like Mizoguchi.

also
Jingi Naki Tatakai (Battles without Honor and Humanity aka Yakusa Paper / Combat sans code d’honneur) by Kinji Fukasaku (1973 )
which as far as I know isn’t easily available to pick up on home video in the U.K. so I hope it’ll pop up on Blu-ray at some point too.