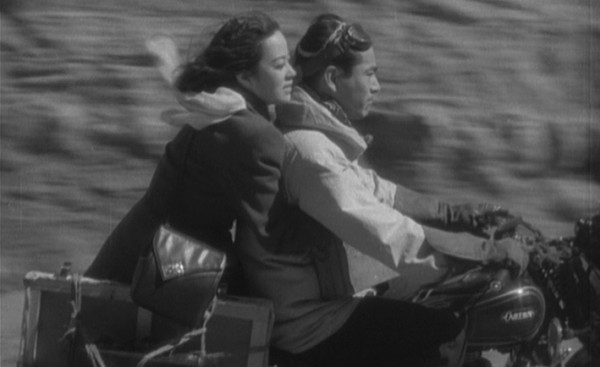 It was exactly 65 years ago today, on April 30, 1950, that Akira Kurosawa‘s tenth film Scandal was released. It starred Toshirō Mifune, Takashi Shimura and Shirley Yamaguchi in a story about the destructive potential of scandal seeking tabloid newspapers, a topic still very relevant today.

Here is a trailer created for the Masters of Cinema release of the film (warning: Christmas music):

For more information about Scandal, see our film club introduction from a few years ago and also check out our previous discussion.

I watched Scandal for the first time this evening. I can’t understand why it is considered one of Kurosawa’s lesser films. I understand the issue that many have with the film: that it’s original purpose – a commentary/critique of the tabloid media – was hijacked by the character of Hiruta but I don’t see that as the major flaw that many others do.

The acting is some of the best I’ve seen from Mifune but particularly Shimura – I personally feel that Shimura’s acting compares to Ikiru or Seven Samurai (perhaps surpassing them). Hidari’s short drunken monologue at the New Year’s party is also brilliant.

There are some weak points – I didn’t like the way that Hiruta’s daughter was portrayed when she first meets Aoe. Nor did I like the Christmas Carol/It’s a Wonderful Life scene where Hiruta sees his daughter singing with Aoe and Saijo – both of these scenes were overly sentimental; I also thought that the climax with Hiruta revealing the cheque to the judges in court was extremely unrealistic and took away from the ending of the film. But apart from these faults (there were some other minor complaints I had but can’t recall them now) I feel that it was an above average film by Kurosawa.

But having said all of this, perhaps my positive view of Scandal is being coloured by having watched Maadadayo, which I did not enjoy at all, just recently.

I agree with you about Scandal, having read that it was considered a minor work, I put off watching it for a while, but I thoroughly enjoyed it when I did. Much as I like Drunken Angel, I can never quite work out why it is considered so important in AK’s works – I know AK himself considered it his first really important film, but I’ve come to take most things AK wrote about the period with a pinch of salt. I love both ‘No Regrets‘ and One Wonderful Sunday and I think they can fairly be considered among the most important post war works by any film maker. I think that with the exception of a few mis-steps that you mention, its as good a film as Drunken Angel and Stray Dog. In fact, the only immediate post war film by Kurosawa I’ve never warmed to is Silent Duel, which I find just too melodramatic.

I think it’s the major shift in narrative focus about half way through the film which throws a lot of people off, myself included. It kind of feels like several films in one, each one fighting for dominance.

But I think that it’s a better and more important work than it is usually given credit for. It is a very ambitious work, and probably together with The Bad Sleep Well Kurosawa’s most direct attack against a specific social problem. Thematically, it is also kind of a stepping board for Rashomon and beyond.

Glad you liked it!