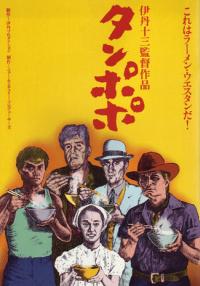 Tampopo is an offbeat comedy “ramen western” that will make you hungry, so do prepare accordingly. It centres on a truck driver who ends up helping a young woman set up a ramen restaurant. In addition to this main story, there are numerous interwoven vignettes which explore our relationship with food.

Tampopo, which is one of the funniest Japanese movies ever made (or is it? you decide), is available in English on a region free Australian DVD that can be found for instance on Amazon.

Our full film club schedule is available here. We will kick off 2015 with Kurosawa’s Dreams.

I’ve been looking forward to this (I must retrieve my dvd from the friend I lent it to). I do think it is one of the funniest Japanese films made, and one of the most memorable I’ve seen. By ‘memorable’, I mean certain scenes have stuck in my head. For some reason, I always think of the French restaurant scene whenever I’m in one, and I’ve never been able to look at an egg the same way since I first saw this particular scene….

One of my favourite Japanese films and the first non Samurai Japanese film I ever saw . Initially it must have been shown on U.K. TV and a friend taped it then I found a VHS copy . Eventually I tracked down a Canadian ( I think ? ) DVD and more recently the Australian DVD. It’s well overdue a Blu-ray release with english sub-titles. It’s a real shame none of his other films are available in English friendly releases. Anyhow I agree it’s funny and it is also a well made film I would recomend anyone to watch.
In fact it was this film that started my whole fascination with Japan , Japanese cinema and Japanese culture and made me seek out the Kurosawa films that didn’t have swords in .

It’s an absolutely brilliant film, and something that I have shown to many friends since I first saw it two years ago. The scene with the spaghetti eating instructions tends to get the biggest laughs!

Itami’s work has fairly recently (2011 and 2012, I think) been released on Blu-ray in Japan, so there is hope that we might see an English friendly release sometime in the future. You are absolutely right that we need more Itami!

I watched Tampopo today. It’s a 115 minute film which takes about 145 minutes to watch because once again about half-way through I simply had to stop the film, go to the kitchen and prepare something that was almost, but not quite, entirely unlike proper ramen. 😆 Ramen is actually one dish that I haven’t quite mastered to my satisfaction, although I blame the lack of availability for proper ingredients more than I do my cooking skills I actually wanted to become a chef when I grew up.

Roger Ebert, I think, makes a very good point in his review of Tampopo:

Humor, it is said, is universal. Most times it is not. The humor that travels best, I sometimes think, is not “universal” humor at all, but humor that grows so specifically out of one culture that it reaches other cultures almost by seeming to ignore them. The best British comedies were the very specifically British films, such as “The Lavender Hill Mob” and “School for Scoundrels.” The best Italian comedies were such local products as “Seduced and Abandoned.” The funniest French films were by Tati, who seemed totally absorbed in himself.

And this very, very Japanese movie, which seems to make no effort to communicate to other cultures, is universally funny almost for that reason. Who cannot identify with the search for the perfect noodle? Certainly any American can, in the land of sweet corn festivals, bakeoffs and contests for the world’s best chili. This is a very funny movie.

He is spot on with that assessment. Although, having said that, I was originally supposed to watch this film with my wife who somehow hasn’t seen it yet, but I decided to watch it on my own while she is in town, for I’m not sure she would find the humour as funny as I do. You see, last weekend we watched The Lego Movie, which I thought was pretty funny (if suffering from poor rhythm), but she totally disagreed.

But I digress. Again. Although the humour in The Lego Movie is distantly reminiscent of that in Tampopo. Both are a little out there. The Lego Movie is of course far more conventional, and I shouldn’t really even be comparing the two at all. But anyway. It is something of a miracle that we don’t have a Hollywood remake of Tampopo yet, 30 years after its release. It would be so easy to make it. It would work brilliantly also as a stage play. But no, for some reason this gem remains buried. Which may be only a good thing.

Anyway, as you may be slowly realising, I didn’t really have anything in particular to say about Tampopo. It is one of those films that just make me want to retell all the funny scenes, although I do realise that there is a pretty serious, or at least ambitious, side to the film as well, as it is so packed with cultural references, twisted genre conventions and filmmaking trickery. But it all seems to have been made in such good humour. I’m amazed that it was only Itami’s second film as a director, although he had of course by that point already worked in the industry for two decades as an actor and writer.

This must have been my fourth or fifth time watching the film in two years, yet it was only now (I think) that I realised that Goro’s sidekick Gun is played by Ken Watanabe!

The reason I have seen the film so many times in such a short time is that I basically have three recommendations when people visiting us want to watch a film: the Hungarian film Control if they want to see a local film, Dredd 3D if they want to see an action film and/or test the 3D capabilities of our television, and Tampopo if they want a comedy. No one ever wants to see Control, and if our guests include even a single female among them, Tampopo it has to be. Unless my wife comes up with a better sales pitch, which I think she has been very good at when at home, since she hasn’t seen the film yet.

Anyway, I’ll finish up with what was my favourite line this time around:

Tampopo: How do I look?
Goro: Like a film star… …in a French movie.

Goro’s clarification at the end of his line is just golden. 🙂

Apparently nine people died in Japan this New Year after choking on Mochi cake. As the article says, it explains the background to this scene in Tampopo (I certainly wasn’t aware before that using mochi cake to dispatch elderly relatives was a ‘thing’!).

Interesting. Well, I suppose it’s easier than carrying your elderly to some godforsaken mountain! 🙂

And now I want mochi. I have tried making it at home a couple of times, but with disappointing results.

I saw this film many years ago but the only scene I can recall is the “egg swapping” scene.

The reason that I want to go back and watch it again, however, is because recently I went on a Kenzaburo Oe splurge and read all of his books sequentially. Kenzaburo Oe is married to Juzo Itami’s sister and Oe and Itamai were best friends growing up. In The Changeling Oe suggests, as have others, that Itami’s death wasn’t a suicide but that he was killed by the Yakuza as revenge for the way that he had portrayed them in his films.