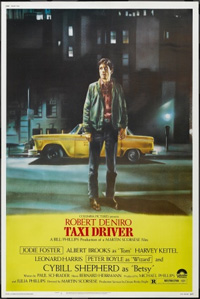 Martin Scorsese‘s 1976 film Taxi Driver is one of the most acclaimed American films of all time, and it is our film club title for the month of December. This offers us an excellent chance to discuss not only the film, but also its connections with Akira Kurosawa’s works as well as Kurosawa’s wider influence on Scorsese’s body of work.

Scorsese has often noted his admiration of Kurosawa and cited him as a special influence on his own career. The two men famously worked together on Kurosawa’s Dreams, where Scorsese played Vincent Van Gogh. According to Teruyo Nogami, a strong relationship formed between the two directors and they ended up “like family” (Nogami, 283).

Taxi Driver shares some thematic elements with our last month’s film club subject High and Low, whose atmosphere in the second half is also similar to the nightmarish overall mood of Taxi Driver. Furthermore, both films feature social outsiders who are looking for revenge, and while nothing suggests that High and Low was a direct influence on Taxi Driver, Scorsese nevertheless appears to have been fairly impressed by Kurosawa’s film, as he has for more than once occasion been working on a possible remake of the film. The last we heard of this was in 2010, when Mike Nichols was mentioned as directing and Chris Rock as adapting the screenplay, with Scorsese executive producing.

Another curious detail linking Taxi Driver with Kurosawa is that according to the film’s Wikipedia page, the screenwriter Paul Schrader was partly inspired by Fyodor Dostoyevsky’s novella Notes from Underground. Dostoyevsky, of course, was a hugely influential figure also for Kurosawa.

In many other ways, the two films are quite different. Where in Scorsese’s work do you think Kurosawa’s influence is most visible, and how do you think Taxi Driver holds up almost 40 years after its initial release?

Taxi Driver is widely available on home video. In January we will be tackling Kurosawa’s Red Beard, with a full film club schedule available on the film club page.

I only managed to see Taxi Driver for the first time earlier this year (despite being a Scorsese fan, I just could never find a dvd) – it blew me away, such a brilliant film. I think it still holds up well, even if its impossible not to snigger at the fashions at the time. What particularly got me was the end – I was so convinced that the shootout was the ‘end’, that I thought the postscript was pointless and a bit of a cop-out… until that famous last ambiguous shot.