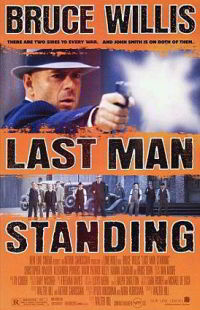 Our film club‘s film for the month is Walter Hill‘s 1996 prohibition era action thriller Last Man Standing. It is a remake of Yojimbo, the film we have been spending time with for the past three months.

Unlike our August film, Sergio Leone’s A Fistful of Dollars, Last Man Standing was a credited and Kurosawa Productions approved remake of Kurosawa’s original. Starring Bruce Willis in the role earlier delivered by Toshiro Mifune and Clint Eastwood, Hill’s remake situates the story in prohibition era United States, near the Mexican border.

Despite its assets of star power, sex and stylised violence, Last Man Standing was received poorly by both critics and audiences. It failed to make back its estimated budget (whatever that means in the world of Hollywood accounting), while critics considered it lifeless, brainless and without soul. Roger Ebert closed his one-star review noting that “[t]his is such a sad, lonely movie”.

Yet, there is something about Last Man Standing which, if it clicks with you, can be said to border on brilliance. It feeds off the same blood soaked source as Yojimbo, A Fistful of Dollars and Django, and as a violent action film follows the road originally paved by Yojimbo, if not approved by Kurosawa himself. Nothing else should, of course, be expected from Walter Hill, whom film critic Philip French earlier this year described as a “master of the low-tech action movie and successor to Sam Peckinpah as the greatest living exponent of lyrical violence”.

Last Man Standing is widely available on home video, and in many places practically for peanuts.

Hill’s film ends our summer of Yojimbo. Next month, we will be moving into the less violent but no less disturbing world of High and Low. For information about its video availability, check out the DVD and Blu-ray sections, while the full film club schedule is available at the film club page.

But before that, we have one final month of blood, guns and manly men doing what manly men supposedly do. Enjoy the final blood bath, and remember to report back your findings.