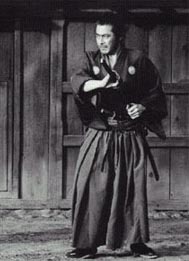 After discussing Rashomon and Drunken Angel in the past two months, the Akira Kurosawa Online Film Club will move on to Yojimbo in July.

Perhaps Kurosawa’s most popular film, Yojimbo centres around a nameless samurai (Toshiro Mifune) who arrives in a small town plagued by rival crime gangs. According to Richie, Kurosawa had for some time wanted to make a film about someone caught between two evils, and who — unlike a normal person — would be able to stop the senseless violence.

Yojimbo also marked the first time Kurosawa used Tatsuya Nakadai in a major role (he had earlier briefly appeared in Seven Samurai). After Yojimbo, Nakadai starred in four other Kurosawa movies, perhaps most memorably as Lord Hidetora in Ran.

The only thing you need to participate is a copy of Yojimbo. In case you are planning to purchase the film, I recommend taking a look at my Kurosawa DVD Buyers’ Guide, which covers the English-friendly DVD releases of the movie.

The standard Kurosawa literature is well worth having, as always.

In addition to the standard literature, there are plenty of works that are in one way or another related to Yojimbo. Here is a quick run down:

– The American crime writer Dashiell Hammett’s novels The Glass Key and Red Harvest served as sources for the story. Kurosawa himself acknowledges the former, while many critics rather point to the latter. You may also be interested in the film noir adaptation of The Glass Key, which may in fact have been the source for Kurosawa rather than the novel.

– Another clear source are the films of John Ford, giving Yojimbo that distinct feel of westerners.

– Kurosawa’s own 1962 film Sanjuro is a sequel of sorts to Yojimbo.

– Sergio Leone’s 1964 A Fistful of Dollars was an unauthorised remake of Yojimbo set in the wild west.

– The 1966 western Django is another spaghetti western that was heavily inspired by Yojimbo.

– Kaze no Yojimbo is a Japanese animated TV-series that aired in 2001 and 2002. It adapts Yojimbo into 25 episodes, and sets it in more modern times.

– The 1984 fantasy film The Warrior and the Sorceress takes its basic storyline from Yojimbo.

– Zatoichi Meets Yojimbo is a Japanese movie made in 1970 that stars Toshiro Mifune in a role very similar to the one he plays in Yojimbo.

– The PlayStation 2 game Way of the Samurai features a setting and many characters similar to those found in Yojimbo.

Did I miss something?

I look forward to this one, Yojimbo should be among the funnest movies to write about.

I hope to see everyone coming in for Yojimbo, it’s about time some of the old regulars come back from the unknown. 😛
Plus with the wider appeal of Yojimbo I hope to see some of the new guys, join in for this one.

June was personally a horrible month for me, so I am just going to skip Drunken Angel and make it up on Yojimbo. Isn’t the third attempts always the best anyways, and the second attempts the worst?-at least for me they are.

As an old regular I will come back from the unknown! I promise! Only I’ll be in Vermont and won’t have internet at the ready so it’ll probably only be a few times a week I even get on the infernal interwebs… Good thing?

But anyway. Yojimbo is gonna be fun. Glad I saw it on the big screen today. When the Toho logo came up with the music, I got chills.

Man, seeing Yojimbo on the big screen most of been cool.

I’m surprised Vermont has even heard of the internet. 😆

I dragged a friend of mine to see Yojmbo at the Michigan Theatre-a sweet, restored space in Ann Arbor.

It was a midnight screening. Clean print, unbelievable silvery, creamy “colors”. Miyagawa! Man! The dog, the hand! You know, sitting with a whole theatre of university students, faculty, film school kids, smart folks, people ready for it-it was like the best thing ever. The audience laughing at all the parts you would want them to laugh…just loving it! What a feeling!

Oh, here is something to get us in the mood:

The theme from Yojimbo!