Kurosawa, Hashimoto, Kikushima and Oguni to be given the 2013 Jean Renoir Award 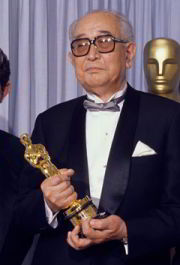 The Writers Guild of America (West) has announced that their 2013 Jean Renoir Award for Screenwriting Achievement will be given to Akira Kurosawa, Shinobu Hashimoto, Ryuzo Kikushima, and Hideo Oguni.

The award is given biannually to a non-US writer or writers for advancing the literature of motion pictures and making outstanding contributions to the profession of screenwriter. The award ceremony is on February 17, and will be simultaneously held both in New York and Los Angeles.

According to media reports, the 94-year-old Hashimoto, who is the only living member of the group, is not expected to attend the ceremony. Ryuzo Kikushima died in 1989, and Oguni and Kurosawa in 1996 and 1998, respectively.

The award has been given out twice before, with Suso D’amico receiving it in 2009, and the 2011 award given to Tonino Guerra. For the full WGA press release, see WGA.org.