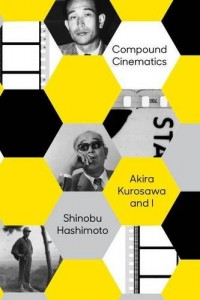 Shinobu Hashimoto (born 1918) co-wrote eight of Akira Kurosawa‘s films, starting with Rashomon (1950) and including films like Ikiru (1952), Seven Samurai (1954) and Throne of Blood (1957). He also served as a production supervisor on Kagemusha (1980). Along with Teruyo Nogami, the 96-year-old screenwriter is one of the very few members of Kurosawa’s inner circle who are still alive today.

It is therefore with huge excitement that I can report that Hashimoto’s book on Kurosawa and their working methods, Compound Cinematics: Akira Kurosawa and I, has finally been published in English.

The memoir, originally published in Japanese in 2006 under the title 複眼の映像―私と黒澤明, has been translated into English by Lori Hitchcock Morimoto. The 256-page book is described by the publisher Vertical Inc with the following words:

Any list of Japan’s greatest screenplay writers would feature Shinobu Hashimoto at or near the top. This memoir, focusing on his collaborations with Akira Kurosawa, a gifted scenarist in his own right, offers an indispensable insider account for fans and students of the director’s oeuvre and invaluable insights into the unique process that is writing for the screen. The author’s first book ever to appear in English, Compound Cinematics also stands as a moving reckoning of sorts.

The vast majority of Kurosawa works were filmed from screenplays that the director co-wrote with a stable of stellar scenarists, many of whom he discovered himself with his sharp eye for all things cinematic. Among these was Shinobu Hashimoto, who caught the filmmaker’s attention with a script that eventually turned into Rashomon. Thus joining “Team Kurosawa” the debutant immediately went on to play an integral part in developing and writing two of the grandmaster’s most impressive achievements, Ikiru and Seven Samurai.

Just as with the indelible presence of actors Toshiro Mifune and Takashi Shimura on screen, Kurosawa’s masterpieces probably would not have been the same without the key roles off screen of Hashimoto, his buddy Ryuzo Kikushima (Stray Dog, Yojimbo, High and Low), and the venerable Hideo Oguni, whom the hotheaded director brought in to serve as a command tower for the team’s singular creative process. The details of the intense, competitive method and its vagaries form the core of the book.

Hashimoto has worked as a screenwriter on over 60 films, with his works outside of Kurosawa including Masaki Kobayashi’s Harakiri (1962) and Samurai Rebellion (1967), as well as Kihachi Okamoto’s Sword of Doom (1966), which was later remade in 2013.

Compound Cinematics: Akira Kurosawa and I became available for purchase online earlier this week, with the official publication date generally listed as April 2. For more information about the book and other Akira Kurosawa books, see here.