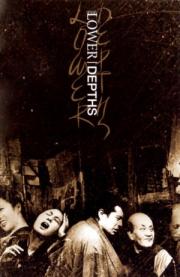 We kick off our AK film club‘s new year by discussing Kurosawa’s The Lower Depths (Donzoko, どん底), which was released in 1957 and written in collaboration with Kurosawa’s regular writing partner Hideo Oguni.

An adaption of Maxim Gorky’s play of the same name, The Lower Depths was the second Kurosawa film in a row to be based on a well-known western play. It is interesting to compare Kurosawa’s handling of his source material here to what he did with his previous film Throne of Blood, based on Shakespeare’s Macbeth. While in both films Kurosawa transports the action into feudal Japan, and while both films also stylistically explore the relationship between theatre and cinema, the end results are nevertheless fairly different.

Whereas The Throne of Blood is fairly abstract and almost dream-like, The Lower Depths represents an almost direct counterpart as a fairly faithful adaptation of Gorky’s social realism. The two films differ also by the virtue of largely inheriting the narrative structures of their corresponding sources, with Throne of Blood fairly linear and plot driven, while The Lower Depths retains Gorky’s circular, almost plotless exploration of the human condition. What still unites the two films, however, is their overall tone, with both (as well as the preceding Record of a Living Being) being some of the darkest and most pessimistic films that Kurosawa ever worked on. Although it must be said that all three films, and The Lower Depths in particular, include also lighter material.

Despite having been released at a time when Kurosawa was at the height of his powers, and even though it followed his arguably most discussed film, The Lower Depths has remained one of Kurosawa’s lesser known works. This of course does not mean that the film is somehow different from the rest of Kurosawa’s works. In fact, despite being a fairly direct adaptation of Gorky, the film has clear connections to such other Kurosawa works as Dodesukaden, The Idiot, One Wonderful Sunday and Rashomon. An additional connection can definitely also be drawn to Sadao Yamanaka’s Humanity and Paper Balloons, which we discussed back in July 2010.

Another cinematic link is of course with Jean Renoir’s earlier 1936 adaptation of The Lower Depths, which we will be discussing in February.

One way in which Kurosawa’s The Lower Depths is a little different from most of his other films is its casting. Lacking any true protagonist, the film is one of Kurosawa’s few true ensemble pieces where no actor occupies more screen space than another. While the cast features many familiar faces — for instance, Toshiro Mifune, Isuzu Yamada, Minoru Chiaki, Kichijiro Ueda, Eiko Miyoshi and Yo Fujiki all appeared in Throne of Blood — The Lower Depths marks the first Kurosawa film for Kyoko Kagawa, who would go on to appear in four other films for the director, and whom we have already seen in Yasujiro Ozu’s Tokyo Story and Kenji Mizoguchi’s Sansho the Bailiff.

For information about the home video availability of Kurosawa’s The Lower Depths, see the Kurosawa DVDs list. The Criterion edition is particularly recommended, as it includes also Renoir’s adaptation, which we will as mentioned be discussing in February. For the full film club schedule, head over to the film club page.

This is probably my favorite of Kurosawa’s less well-known movies unless Drunken Angel qualifies as less well-known. It is a little meandering (as, I assume, the source material is as well), and it took me most of the first act to get into it the first time I watched it, but that’s the point: it’s like life, and the life these people lead is a life of squalor and crushed hopes and dreams.

It’s a terrific ensemble, but I particularly appreciate Bokuzen Hidari’s performance as the pilgrim. It certainly proves his ability to sustain a non-comedic role.

Vili, I hope you don’t mind if I link the film club announcement the last time we watched this or the three discussion threads that followed. Also, the movie is set late in the Edo period, somewhere around the middle of the 19th century. I’m not sure “feudal” is an accurate term for the social structure at that point.

To me, the central conflict of the movie is between hopeful illusions and grim reality. It’s covered somewhat in the previous thread about whether Hidari’s pilgrim is a villain or not.

Whoa, I just noticed that I hadn’t replied to this!

I too very much like The Lower Depths. In fact, it’s one of those films that seem to get better after each viewing. The way the film blends theatre and cinema is really well done, indeed so well that you don’t always even stop to think about how theatrical it is. And yet it is 100% cinema. Marvellous stuff.

And then there is the ensemble cast which really is good.

lawless: Vili, I hope you don’t mind if I link the film club announcement the last time we watched this or the three discussion threads that followed.

Not at all! In fact, I wonder how I forgot to do that myself!

lawless: Also, the movie is set late in the Edo period, somewhere around the middle of the 19th century. I’m not sure “feudal” is an accurate term for the social structure at that point.

It is perhaps debatable, although off the top of my head I don’t really remember anyone suggesting anything else than the Meiji Restoration as marking the end of Japanese feudalism. This at least seems to be the way Wikipedia has defined it as well.

I’m sorry we didn’t get to discuss the film more this month. Its really grown on me, and I think it has probably the finest set of ensemble acting in any AK film. I wonder why he didn’t use the technique more (i.e. have his actors together long before filming) as I’ve always thought one consistent flaw in his films is uneven acting, especially his later films.

I’m not sure “feudal” is an accurate term for the social structure at that point.

I suppose it depends on the definition of ‘feudal’, but I think plenty of writers have described Japan as ‘feudal’ in nature up to the end of WWII. Certainly Joan Mellen described it as such, and I think the Occupation Authority was specific about describing their role as ‘defeudalizing’ Japan.

Ugetsu: I think plenty of writers have described Japan as ‘feudal’ in nature up to the end of WWII

That’s a good point. But wouldn’t that be more in terms of the mindset of the society than in how the society actually functioned?

Despite its theatrical roots, the film never feels stagy (to me, at least. Your mileage may vary.) I think that’s due to working in a set in situ that gives you the feeling of claustrophobia that the residents must experience as well as a sense of place.

I think Vili’s right; at least within the field of historical inquiry, “feudalism” is used to describe the way in which a society functions rather than its mindset. Kind of like how the terms “Nazi” and “fascism” get expanded beyond their original meanings in a way that causes a lot of confusion.

I take the point about the distinction between a societies mindset and how it functions, but I do think that Japan did have distinct feudal characteristics up to the mid-20th Century – not least an emperor and distinct castes of society, whether they be samurai turned into bureaucrats or buraku. You could not have kamikaze pilots in a democratic, capitalist or communist system.

You could not have kamikaze pilots in a democratic, capitalist or communist system.

And how are suicide bombers different from kamikaze pilots?

I would suggest that the difference is that suicide bombers are volunteers, while Kamikaze pilots were not (theoretically they were volunteers, but they were always ‘asked’ in a way which made it impossible to refuse without permanent dishonour). In other words, they were asked to sacrifice themselves for their Lord/Emperor, which I would think is a feudal characteristic.

Ugetsu – If organizations like Al Qaeda or Hezbollah are viewed as substitutes for or the equivalent of a nation-state, I don’t see any distinction. The leaders of the organization choose the people they think are appropriate for the mission. There may be some volunteerism involved, but once chosen, there is no backing out. They are sacrificing themselves for their concept of God, although really it’s driven more by ethnicity and culture than by religion. Religion is just the excuse. But it’s not that different from sacrificing oneself for one’s lord, emperor, or king because when one does that, one’s really sacrificing oneself for one’s nation. Substitute a terrorist organization for the nation-state and you have the suicide bomber.

If organizations like Al Qaeda or Hezbollah are viewed as substitutes for or the equivalent of a nation-state, I don’t see any distinction.

I’m not sure they are substitutes for nation states in that they are volunteer organisations – people choose to join them, and choose to become suicide bombers. Of course, there may well also be peer pressure within families and within the organisations to ‘encourage’ people do wear those vests.

I would suggest that young men chosen as kamikaze had no such choice – they were ordered to do so, and only in the context of a very rigid hierarchical society would they do so with minimal complaint. I think this can only take place in a society where a layer of society is ‘obliged’ to accept unquestioning orders from a higher ‘layer’. I think this would be one characteristic of a feudal society.