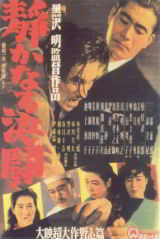 It is a little over two years since we last took a look at the film. In fact, for a quick background reading to the relevant film criticism, I suggest taking a look at my previous introduction!

And while I am in the subject of linking, take a look at our past discussions as well:

For some reason, this disc is not currently available from Netflix, so I may not be able to participate in whatever discussion ensues unless that changes.

I’m sorry to hear that, lawless. I’m quite looking forward to seeing this one again, to be honest. I don’t consider it one of Kurosawa’s best films, but there is something about it that quite fascinates me.

I’m lucky in that I’ve a nearby dvd store that keeps a lot of old releases, so I’ll be getting out out again for another look. I am looking forward to it, because its one of the tiny number of Kurosawa films I didn’t really enjoy watching – I found it too melodramatic. But having watched and discussed a range of his older films since then, I’m looking forward to seeing it with (I hope) slightly more educated eyes, so hopefully I’ll get more out of it this time.

I’ve just managed to get around to watching it again. I must say I enjoyed it far more this time than the first time I watched it, when I found the melodrama and theatrical acting too much to take.

I do think there is far more allegory in the film than the simple notion of the right and wrong way to deal with the ‘disease’ of Japans war guilt – I’ll have a think on it and post in more detail later.

I saw The Quiet Duel about 6 months ago via Netflix. One thing struck me was the earlier scene where the operation was going on. The leakage of raindrops in the operating room was very similar technique Kurosawa was using in One Wonderful Sunday. Then I remembered: pages of a book blown by the wind in I live in Fear and that heavy swishing sound of a watermill in Seven Samurai – they are in a same lineage of his cinematic expression to heighten the suspense.

That’s a good point, Hilo. It is actually quite interesting that Kurosawa would use almost exactly the same device in two films that were made so close to one another (One Wonderful Sunday and The Quiet Duel).

By the way, welcome to Akirakurosawa.info! 🙂