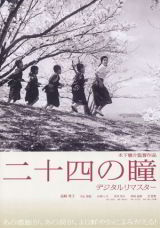 February’s film club feature is Twenty-Four Eyes (Nijuushi no hitomi) by Keisuke Kinoshita (1912-1998), a director who is perhaps less well known in the west than his contemporaries like Kurosawa, Ozu, Mizoguchi or Naruse. Kinoshita is much better known in Japan however, so much so that director Masaki Kobayashi once called him the only film genius in Japan’s postwar era (quoted in Audie Bock’s Japanese Film Directors, p. 189), while Kurosawa in a 1960 interview with Donald Richie declared him second only to Mizoguchi (Cardullo, p. 7). Known for being famously prolific, Kinoshita directed his first feature in 1943 (just like Kurosawa), and for the next two decades released on average two films a year — an amazing pace considering the high quality of his work.

Twenty-Four Eyes, Kinoshita’s twenty-fourth film, was released in 1954 and is generally considered the director’s highest achievement. It was chosen the best film of the year by contemporary critics in the prestigious Kinema Junpo magazine poll, as well as winning the Golden Globe for Best Foreign Language Film the following year. To put this into perspective, one should keep in mind that 1954 also saw the releases of such films as Kurosawa’s Seven Samurai and Mizoguchi’s Sansho the Bailiff. The popularity of Twenty-Four Eyes continues today, with the film most recently having ranked 6th in Kinema Junpo’s 2009 anniversary list.

For our film club, Twenty-Four Eyes is a companion piece of sorts to Kurosawa’s 1946 No Regrets for Our Youth, which we watched in January and continue discussing. Although the two films are not exact contemporaries, they are thematically linked as both take us through Japan’s wartime years. Kinoshita’s film, having been made almost ten years after Kurosawa’s and the war, perhaps benefits from the distance, but both films can be seen as engaging in the gargantuan task of rebuilding a national identity. Both films also feature a strong female lead, with the woman at the centre being an educated city girl who moves into a rural community and has to struggle to find her place. In Twenty-Four Eyes, the main role is played by Hideko Takemine, who passed away only a month ago, on December 28, 2010.

As mentioned earlier, Kurosawa had much respect for Kinoshita, and it is perhaps surprising that in the small world of the Japanese film industry of the the time, the professional paths of the two crossed only a few times. Kinoshita’s 1948 film The Portrait (Shoozoo) was penned by Kurosawa, and the two would later work together also as part of the “Club of the Four Knights”, a production company that only ended up releasing Kurosawa’s Dodesukaden (1970). They also wrote Dora-heita together with the two other knights of the production company, Kon Ichikawa and Masaki Kobayashi. As with Kurosawa, the number of films directed by Kinoshita dropped in the 1970s as the Japanese film industry was struggling.

The general availability of Twenty-Four Eyes is pretty good. For region 1 (North America) there is a Criterion edition DVD, while region 2 (Europe) can purchase a very decent (and slightly cheaper) Masters of Cinema release. I’m afraid though that I don’t know if there is any region 4 release for those of you in Australia, New Zealand or Latin America.

I watched this for the first time over the weekend. A very interesting film and a great contrast to No Regrets for our Youth. As usual, I try to avoid reading up on a film before I watch it, so I’m only just catching up on some reading now. Richie doesn’t have much to say about it, although he clearly liked it as he defends it against claims that it is too sentimental.

As so often, I find Mellen has written some of the most interesting things about it, and I agree with her assessment, that basically it is half a great film. To be specific, the first half is wonderful. Its a sensitive, beautifully acted account that feels ‘real’ about what it was like in the 1930’s, as things gradually froze over, and militarism took hold. But the film is also quite obviously intended much more of a feel-good film than No Regrets. Unfortunately, this leads to the second half, in which it badly loses its focus and becomes a bit of a weep-fest with some quite facile politics.

I have had a copy of the Masters of Cinema edition of this for a while now and have watched it at least a couple of times . I remember enjoying it so I gave it another go last night.
The print seems pretty good but quite scratchy in places.
Interestingly I think I understand why this film is supposed to remain very popular in Japan as I can enjoy it on a level I would have enjoyed catching an old Hollywood movie on T.V. on a Sunday afternoon, simply getting involved in the story. Having said that I do agree with Ugetsu in that the first half of the film seems far superior to the post war section.
It’s a loss of innocence theme that is set up wonderfully with the introduction of the novice “modern” teacher and extremely cute class of children young enough not to have been influenced too much by the hardships of life . But then the second part seems to be handled in a considerably less subtle way as time passes and the reality of life and horrors of war kick in. I’m a sucker for any Japanese film with scenic views of different parts of Japan and this of course delivers some wonderful scenic shots as well as some interesting set interiors .
It was also interesting ( as an Ozu fan) to see Chishu Ryu’s performance which is very different than those of his Ozu characters .The film also includes a class reunion scene , something Ozu seemed fond of employing in several of his films. I’m no expert but Hideko Takamine’s performance in the first two thirds of the film seemed wonderful but I didn’t enjoy the later sections so much.

Well, I pretty much agree with what you both say, Ugetsu and Longstone! I enjoyed the film very much and also feel the first half promised much more than the second half delivered. Being an easy victim for sentimentality (whisper it, but I do like it) I was brought to tears many times throughout the story. Having said that, it did seem to be laid on a bit thick later on, and I’m not certain it was for much more than the sake of sentimentality itself.

I willed Sensei Oishi to have more bite when the political elements came in, and in standing up for her students, but she didn’t – and maybe that is, in the end, more realistic. Life seemed to have got the better of her by the end, and despite the fact she must have only been in her 40s (which was ‘older’ back then, and especially in a poorer community, I admit), she seemed like an old woman (until she got on her bike again!). Mind you – she had been through a lot, I guess, and that will age you.

Like Longstone I thought the scenic views were stunning and I enjoyed my tour of the island. I was also impressed with the facial similarities between the first two ages of children – I wonder if any of them were actual siblings? The other thing that struck me was suddenly hearing instrumental music that I know as ‘Changes’ by Alan Price from the 1973 film O Lucky Man! I didn’t realise that the tune was actually ‘What A Friend We Have In Jesus’ – it’s the first thing I had to look up after watching the film!

I finally managed to finish Twenty-Four Eyes this morning. I’ve been watching it in bits and pieces at airports, buses and strange beds. It’s been one of those months.

Not the most optimal way of watching a film, I admit, but I must say that I agree with your comments. If anything, I would disagree about the beginning, which I didn’t find too interesting. Compared to the last third, however, it was certainly better.

I guess it’s one of those films that would have benefited tremendously had I lived through the era. As it stands now, it just felt way too sentimental, and quite without direction. Even if it may have been a realistic story. Anyway… Lovely scenery though. Often, I was hoping that the actors would just bugger off so that they wouldn’t be blocking the view!

Garen’s point about the children and their young adult versions looking very similar is something that also I noticed. That was certainly really nicely done!

Ugetsu has some interesting points in his separate thread comparing the Yukie of No Regrets to Oishi from 24 Eyes. I want to reply to that as well, as I think that it is a really interesting comparison, but I think I’ll only manage to do so once I get home sometime next week.