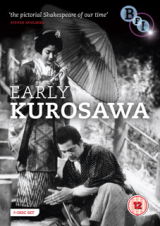 The British Film Institute (BFI) will release a DVD box set titled Early Kurosawa this spring. The release date is set for March 28, and the suggested retail price is £39.99.

It is not a bad price actually, considering that the box set will contain Kurosawa’s first six films: disc one will have Sanshiro Sugata and Sanshiro Sugata Part 2, disc two The Most Beautiful and They Who Step on the Tiger’s Tail, disc three No Regrets for Our Youth, and disc five One Wonderful Sunday. As the films have been practically unavailable in region 2 with good English subtitles, this is excellent news for anyone in Europe who for one reason or another has not been able to purchase the Criterion Eclipse editions of these films which are region 1 (North America)!

Just like with the Criterion Eclipse releases, no special features will apparently appear on the discs themselves. However, the box set will include an illustrated booklet with essays by Philip Kemp. There is no word yet (that I can find) about the quality of the prints. (For a small update: see the first comment to this post.)

Last year, BFI released a samurai collection, held a Kurosawa season at their London cinema, and had Kurosawa on the cover of the July 2010 issue of their film magazine Sight & Sound. It is great to see all this activity from their part!

Here’s a small update about the transfer. According to a BFI press officer that I have been in contact with:

The titles in this collection were transferred in High Definition from the best available film elements by Toho Studios. Although some films still exhibit some wear and damage, this is as per the existing source materials.

All films appear in their original aspect ratio of 1.33:1 with mono 2.0 audio.

The release will contain a short booklet.

So, no restoration done here, but that probably isn’t surprising. If the sources are as good as the ones used by Criterion for their Eclipse sets, the results should be pretty good!

This is wonderful news, tempered only slightly by the fact that just over a month a go I decided to bite the bullet and spend almost £100 getting the two Criterion early Kurosawa boxed sets from the US. Ah well. It will be marvellous to have a ‘native’ region 2 set.

Ditto … great to see these finally out in the U.K. but I also recently invested in the U.S. sets.
Has anyone else been buying the recent BFI Ozu sets ? I think they are excellent , the two colour films released recently look amazing on Bluray .
Here’s hoping for some more U.K. region coded Kurosawa Blurays soon .

Sounds good, hope they have finally got their act together. I found that their releases were very inferior to Masters of Cinema (in Region 2) and Criterion in Region 1 that I’d pretty much given up on them.

Longstone, I didn’t realise they had released blu-ray Ozu sets – sounds interesting, I’ll give them a look. I love the look of Ozu’s colour films (I’ve seen them on digital cinema transfers, might be the same as the BFI sets, if so, they are great).

Yes, I’ve been getting some of the new BFI Ozu releases – lovely (I don’t yet own a BluRay player, but they come with DVD as well).

Hi
yes , I was amazed when I read that the BFI planned to release 32 Ozu films in three years,
all supposedly as dual format sets containing 2 films each ( the main feature being on Bluray and DVD and the bonus “rare” film on DVD )
It seems so far the quality is at least very good for the Blurays ( 5 sets out already)
Here is the most recent press release .
BFI Ozu press release

Wow – I had no idea the Ozu plan was so comprehensive. Let’s hope they follow its lead with more Kurosawa, and give us The Lower Depths, Dodeskaden and Dreams as well – if that’s not being greedy 🙂