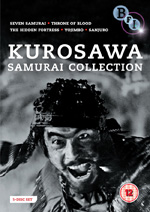 British Film Institute has collected five of Kurosawa’s samurai films into a single box set, which will be available for purchase on 7 June 2010. The box set, which also contains film notes, is released alongside BFI Southbank’s Akira Kurosawa and His Influence, a season running throughout June to celebrate the centenary of Kurosawa’s birth with films made by both Kurosawa himself and those he has influenced.

BFI’s box set will include Seven Samurai, Throne of Blood, The Hidden Fortress, Yojimbo and Sanjuro. While BFI has not confirmed this to me, I assume that this is just a repackaging of their old editions (see Kurosawa DVDs for more information about BFI’s releases).

For more in formation about the availability of Kurosawa’s films on home video, see the sections on Kurosawa DVDs and Kurosawa Blu-rays.