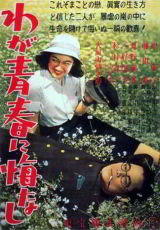 Our film club kicks off 2011 with Kurosawa’s first post-war film, No Regrets for Our Youth (わが青春に悔なし, Waga seishun ni kuinashi), released in 1946. (And not Keisuke Kinoshita’s 24 Eyes, as yesterday mistakenly suggested by the “currently playing” text. We will have 24 Eyes next month.)

I have unfortunately been too pressed for time to come up with a proper introduction (I really should work on those in advance), so we will have to do without one for now. I’m sure that won’t be a problem though.

Although No Regrets for Our Youth has been quite extensively discussed by critics, it doesn’t tend to come up in general discussions of Kurosawa’s films. It would therefore be very interesting to hear your general opinions of the film. Do you like it? Do you think that it is an important part of Kurosawa’s oeuvre? What do you think of Setsuko Hara’s lead character? And was Kurosawa really trying to say something here, or was he simply pampering to the American occupation forces?

This is my favorite Kurosawa film.
It is the most challenging of his films for me.

I have a clear preference for contemporary works of Kurosawa over historical ones, and No Regrets for Our Youth certainly has a good place among my favorites, partly for the good actors (even as far as the secondary role of Takashi Shimura, who excels in villain roles as well as in others) and partly for the praising of political and social commitment.

Probably the american forbidding of imperial topics in cinema industry and the recommanding of democracy praise topics were important in Kurosawa’s decisions, but I still believe that, as well as in The Most Beautiful, and even further, the topic more or less imposed was in adequation with his expression wills, or he adapted it to his wills.

It is said that the Americans promoted also women liberation topics after the war, and in the Eclipse Postwar Kurosawa presentation of the film (I don’t know who wrote this), it is put forward as the only film of his career aligning itself with the point of view of a female protagonist, but The Most Beautiful already did this, at least in my point of view.
And I think indeed that the evolution of the Yukie character through the story is really interesting, well done, and positive about woman responsibilities, breaking from the habitual sexist customs of the beginning and middle of the film (girl urged to get a husband and a respectable situation, woman at home wearing the kimono, preparing meals and arranging flowers…).

That will be no surprise if I say that Setsuko Hara is a wonderful actress.
And I have some question about her, as I discovered that the pieces of music the character Yukie plays on piano are from Modest Mussorgsky (Pictures at an Exhibition being available on the web) and that the play was not perfect but recognizable and not bad.
Would she have played the pieces herself or would it be playback?
I know that many actors at Toho and other big companies during this era were accomplished actors, capable of adaption to nearly any situation (sabre fight, horse riding, music playing and so on) like Takashi Shimura, but Setsuko was from another generation.

Thanks for your thoughts, guys!

Like you Fabien, I much prefer Kurosawa’s contemporary films over the samurai ones, but I don’t quite share your enthusiasm of No Regrets for Our Youth, the reasons for which I just elaborated on in another post.

I do agree that there is some excellent acting there (apart from Hara, who I don’t like here), including what is perhaps my favourite performance from Susumu Fujita in any film he did with Kurosawa. According to his Wikipedia page, Fujita had actually considered leaving the acting profession after the war, feeling that his portrayal of war heroes had been wrong. I wonder if Kurosawa took this into consideration when casting him as Noge and everything that he stands for in the film.

Regarding your question about piano playing in the film, I don’t know if Hara performed her own pieces, but at least the ones early on in the film seem clearly over-dubbed to me, with Yukie not quite in sync with the music. The piece that she is shown playing at around 1:40:00 (and where we only see the performer’s hands) seems much better in sync though.

And I have some question about her, as I discovered that the pieces of music the character Yukie plays on piano are from Modest Mussorgsky (Pictures at an Exhibition being available on the web) and that the play was not perfect but recognizable and not bad.
Would she have played the pieces herself or would it be playback?

…played with all the mechanical prowess and lack of understanding exhibited by most Japanese girls who have learned how to play hard pieces on the piano.

I was wondering myself about that sequence. On the one hand, Hara seems to overdo the acting at the piano, but I wonder if this is quite deliberate, to demonstrate her overdramatic teenaged persona. She was playing up for her ‘audience’. There seemed to be a lack of synch which would indicate to me that Hara wasn’t playing it, but I would assume that as a well brought up lady of the time she would have been familiar with piano.

I just watched No Regrets… for the first time and have come away with mixed feelings. Overall, I enjoyed it – I was fascinated by Hara throughout, and loved her interactions with the two potential suitors. One of my favourite things about Kurosawa is the way he can present a complex character with almost a single stroke of his brush, for instance in the early scene where Yukie demonstrates her confused attitude and desires when she begs Itokawa to apologise to her for no reason, and is then annoyed when he obediently does it. Also the difference between Noge and Itokawa, displayed when they offer to help Yukie across the last bit of the stream: Noge shows his radical nature by breaking convention and leaping across to her and scooping her up, something his rival would never even consider. I enjoyed the contrast between the ideal beginning and the harsh reality of the farm scenes at the end.

I struggled through some of the middle scenes – I actually started to feel a little drowsy watching them, perking up more after Noge was announced to have died (though the appearance of Shimura kept me entertained – a brilliant little cameo), and then staying interested throughout the rural scenes until the end.

I found it quite inaccessible in many ways, largely because I think you need to have some appreciation of the background to the events that surround the film and that are contemporary to it. It has made me want to learn more and I definitely want to watch the film again, coming to it with a bit more knowledge to support my viewing. A really interesting picture though, and it’s stayed on my mind since watching it.

I found it quite inaccessible in many ways, largely because I think you need to have some appreciation of the background to the events that surround the film and that are contemporary to it.

Glad you liked the film – your reactions are very similar to mine when I first saw it. I too, found the middle section a bit of a drag, but I think its very hard for a film maker to cover 12 years of time in a short period without an awkward middle section to ‘fill in’ the narrative.

In general terms, it is I think difficult to enjoy fully films from the period when you first encounter them – when I first started watching early Japanese films I was so distracted by their ‘differentness’ that I often never got the core point of the film itself. I think that by focusing on the overall themes – i.e. how to maintain your humanity in the face of an evil – its easier to ‘get’ a film like this rather than getting too tangled up on knowing about mid Century Japanese politics and society. It still does annoy me when I read supposedly learned writing on Japanese film that make very obvious errors due to a lack of context. I think this is particularly common with Kurosawa films because of the assumption that he is ‘western’ and hence easier to understand, while Ozu, Mizoguchi, Oshima, etc., are ‘Japanese’ and hence exotic and inscrutable, and so often get a free pass critically in a way Kurosawa doesn’t.

I think that’s a very good point, Ugetsu. All films benefit from a little knowledge of the context, though some require it less than others on the level of pure entertainment. No Regrets… does require it more obviously, I think – though as you say, the overall theme comes through strongly and is very well demonstrated.

I recently watched Those Who Tread on the Tiger’s Tail for the first time and really enjoyed it for the story and themes alone. I then read more about it and watched a version of the Kabuki play on YouTube, leading to an even deeper appreciation. I have a great interest in the history of the martial arts which elevates Sanshiro Sugata II a lot higher in my estimation than I think Donald Richie and some other writers have for it.

Interesting what you say about critics of Kurosawa and his fellow contemporary countrymen too – I think that’s very true.

I disliked the portrayal of Yukie in the middle of the film very much. What was up with all the weeping? It made me alternately cringe and want to shake her.

I own the sheet music to Pictures at an Exhibiton — I love Emerson, Lake, and Palmer’s version — and have tried playing the same piece as Yukie does — Great Gate of Kiev. It’s a grandiose, triumphal piece; I took her to be expressing her anger by pounding on the piano while playing it. (That said, the section she plays definitely does not call for a subtle touch.) While the playing is not that of a professional, due to the synch issues mentioned above, I don’t think Hara played it herself.

I disliked the portrayal of Yukie in the middle of the film very much. What was up with all the weeping? It made me alternately cringe and want to shake her.

I do agree that the middle section was a little overwrought in portraying Yukies confusion and uncertainty about her lifes direction. I wonder to what extent the fault is Setsuko Hara’s – I got the impression watching it that this sort of scene just wasn’t her strong point as an actress – she was always much more impressive at portraying hidden emotions (as in the last act of the film). I remember reading a discussion on an Ozu forum a long time ago where a Japanese poster suggested that in Japan she was considered a ‘daikon‘, which I understand to mean more of a ‘character’ than a skilled actress – i.e. she was only good at playing certain ‘types’. Whether or not this is true I don’t know, but I did get the impression watching the film that at certain times she seemed uncomfortable and a little forced, mainly in the middle section.