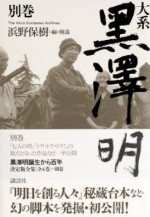 Tokyograph (English) and Yomiuri (Japanese) report that three scripts by Kurosawa have recently been discovered, dating from the early part of his career. Before you get all excited, however, let me continue by saying that as far as I’m aware, only one of these scripts was actually written by Kurosawa.

The good news first. According to the articles, early in his career Kurosawa penned a radio play titled 陽気な工場 (Youki na koujou), which was broadcast by NHK (Japan’s national public broadcasting corporation) in August 1942, which would be four months before Kurosawa began shooting his debut film Sanshiro Sugata. The radio play script was then apparently stored in Wasada University’s Tsubochi Memorial Theatre Museum, but forgotten about.

The play’s title, I think, translates as “Cheerful Factory”. Considering that this was two years before Kurosawa’s 1944 The Most Beautiful, a film about wartime factory workers, a lot of interesting questions arise. For instance, was the radio play some kind of an early version of the themes explored in the later film? What I can make of the Yomiuri article (and my Japanese is what it is), the play sounds like another propaganda piece, but is more humorous, and follows a factory brass band.

The second script discovered is for the 1946 Those Who Make Tomorrow, a labour strike film for which Kurosawa was half forced by Toho to direct a segment, with other parts helmed by Hideo Sekigawa and Kurosawa’s old mentor Kajiro Yamamoto. To the best of my knowledge, Kurosawa had nothing whatsoever to do with the script, and as he later pretty much disowned also his directorial work on the film, it is very questionable to call it a “Kurosawa script” at all.

The third so-called Kurosawa script now discovered is for a proposed film titled 棺桶丸の人々 (“Kanokemaru no hitobito”), which I suppose translates as something like “Casket People” or “Coffin People”. While the story was based on Kurosawa’s idea, it was actually written by Shinobu Hashimoto, who was part of Kurosawa’s circle of co-writers throughout the 50s and 60s, helping to write films like Rashomon, Seven Samurai and Ikiru. As the Tokyograph article mentions, the script was meant to be turned into a film in 1951 with Toshiro Mifune starring, but production was halted before completion. The story apparently “involves the sailors on an old transport ship who overcome stormy weather.”

All three of these scripts can be found in a new book titled 大系 黒澤明 別巻 and published in Japan next week, which collects some of Kurosawa’s more rare writings. This is an addition, or “supplement”, to an already published four-part series of books gathering Kurosawa’s other works.

Finally, and absolutely and completely unrelatedly, here are two pictures of Teruyo Nogami attending a Kurosawa tribute at the Rome Film Festival yesterday.