Film Club: The Most Beautiful 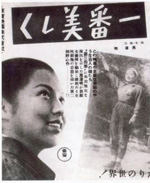 This June, the film scheduled for our Akira Kurosawa Film Club is The Most Beautiful. Unfortunately, the film is quite difficult to get hold of with proper English subtitles: check out Kurosawa DVDs for more information about available editions.

After his debut work Sanshiro Sugata, the 33-year-old Kurosawa was asked to direct a wartime propaganda film about Japanese fighter planes. This film never materialised, however, and Kurosawa’s propaganda film took an entirely different direction: The Most Beautiful depicts the wartime efforts of female factory workers. That Kurosawa got to direct anything at all could perhaps be considered a sign of the young director’s place in the Japanese film industry at the time: the film was made at a time when supplies were low and film production had come down from 232 films a year in 1941, to just 46 works in 1944. (Galbraith 46) Granted, the director had also been relieved from all army duty, and unlike other directors like Yasujiro Ozu, was not serving overseas.

The Most Beautiful is an anecdotal, episodic, documentary-like film. It is usually considered a minor work from Kurosawa, with critics generally concentrating on two main aspects: its documentary style, and its status as a propaganda film.

Regarding the film’s documentary style, Kurosawa wrote in his autobiography that “[w]hen I received this project to direct, I decided I wanted to try doing it in semi-documentary style. I began with the task of ridding the young actresses of everything they had physically and emotionally acquired that smacked of theatricality. The odor of makeup, the snobbery, the affectations of the stage, that special self-consciousness that only actors have — all of this had to go. I wanted to return them to their original status of ordinary young girls.” (Kurosawa, 132)

The film was shot on location in a real factory, in which the actors and crew also lived, marking the first time Kurosawa took such a devoted approach to film making in order to secure realistic performances. (Galbraith 47) The result was so convincing that from the major commentators, Richie in fact approaches the film not so much as a work of fiction shot in a documentary style, but rather almost as a documentary that simply uses actors and the techniques of narrative film making. (26)

Prince notes that Kurosawa’s documentary-like approach does not only result in naturalistic acting, but that it also permeates the camera work which “is largely stationary and avoids extreme angles, and the editing lacks the shocking shifts of perspective and abrupt shot transitions that typified Sanshiro Sugata. Nevertheless, several sequences do clearly exhibit the marks of Kurosawa’s style”. (55) Meanwhile, Galbraith sees Kurosawa’s direction in The Most Beautiful as “energetic and consistently innovative”, comparing his editing in the film to Leni Riefenstahl, his compositions to Russian propaganda films, and noting that in The Most Beautiful, like so often later in his career, Kurosawa would often emphasize what he would not actually show on the screen, or show only much later. (48-49) Also Richie sees many parallels to Kurosawa’s later works, particularly Ikiru, in both theme and technique. (27)

The film’s status as a direct propaganda work has received much attention. Both Sorensen (189) and Yoshimoto (88) ponder what exactly Kurosawa (135) meant by calling the film “the one dearest” to him. Yoshimoto suggests that while much may have had to do with the fact that Kurosawa ended up marrying one of the film’s actresses, “it is at least equally important to note that some of the narrative motifs in this wartime film reappear in his postwar films as vehicles for the assertion of what are often regarded as humanistic ideals. There is a strong sense of continuity between Kurosawa’s wartime and postwar films, and this continuity problematizes any facile differentiation of so-called postwar humanism and the wartime militarism of his films.” (88) Prince similarly reminds us that The Most Beautiful is not very different from Kurosawa’s later films: “Like all Kurosawa’s films, this one is centered around a scenario of service and austere self-discipline, but it shows how these codes may produce individuals in submission to nation and emperor as easily as, in other films, they produce characters in postures of heroic or social rebellion. It should not surprise us that Kurosawa, normally so socially critical an artist, should have produced so effective a wartime propaganda film.” (55)

Galbraith, however, points out something that he sees as diverging from the rest of Kurosawa’s works: “The Most Beautiful is alone among Kurosawa’s films in that he has unreserved faith in the group. From here on, he reserved his faith for a belief in individuals like Tsuru.” (48)

Ultimately, The Most Beautiful has received less attention than Kurosawa’s debut work, or the works that would soon follow. But considering that Kurosawa has often been criticised for the lack of leading, or at least positive female characters in his films, it is perhaps somewhat surprising that this aspect of The Most Beautiful, a film centring around a group of women, has been left largely untouched by the main film critics writing on Kurosawa.

The forums, as always, are open for your comments, insights, and questions. Join the discussion!

Tagged with Film Club, the most beautiful

Seems almost impossible to get a copy of this dvd! Amazon.com won’t ship Region 1 dvd’s to Ireland, Amazon.co.uk has the boxed set at £758! There are no other versions available.

Anyone know of a smaller retailer who might ship out a copy?

Have you tried the Google product search, Ugetsu?

Sorry I’ve been a no show for a few weeks.

I watched this last year, on the terrible Region Free dvd release, and am holding off a second viewing until the war films boxset hits because I really don’t want to try to decipher those subtitles again.

That said, I was really impressed with the movie, much moreso than the entertaining yet generic SANSHIRO SUGATA. Since I was watching Kurosawa’s movies in their natural order, this was the first to immerse me into a fully realized world as they worked in the clattering factory or shivered in well-worn uniforms.

However, while I agree that it was made as a propaganda film, am I the only one who finds it to be a remarkably subversive criticism of the military state of those days? His focus seems to be less on the glory that is Japan than it is on these magnificent women who struggled through a relentless system of “Always increase production!” and are even required to march down the streets in a garish band. In the final scene, when the woman continues to work despite crying over her lost husband, is it really because she’s sacrificing for the triumph of the state … or simply because she has nowhere else to go?

Then again, I might be way off. I’ll have to see a version with proper subtitles to be sure. But given how bitterly he portrayed the militarists a mere two years later in NO REGRETS FOR OUR YOUTH, I wouldn’t be surprised if the jabs I perceived were intentional.

Oh, and as an aside, Vili, given the obscurity of his first four films, should we maybe postpone them until their own smaller boxset becomes available in August? That might give people a better chance to view and discuss them.

However, while I agree that it was made as a propaganda film, am I the only one who finds it to be a remarkably subversive criticism of the military state of those days? His focus seems to be less on the glory that is Japan than it is on these magnificent women who struggled through a relentless system of “Always increase production!” and are even required to march down the streets in a garish band. In the final scene, when the woman continues to work despite crying over her lost husband, is it really because she’s sacrificing for the triumph of the state … or simply because she has nowhere else to go?

It could well be that you have noticed something in the film that I haven’t, or it could be the subtitles, but I must say that I don’t see the criticism. Regarding the “always increase production” mentality, it should be noted that the women in the film are originally assigned a much smaller quota, but as they feel that they can help just as much as the men do, they request a higher increase. The band, meanwhile, seems to be an activity that they genuinely enjoy participating in.

Oh, and as an aside, Vili, given the obscurity of his first four films, should we maybe postpone them until their own smaller boxset becomes available in August? That might give people a better chance to view and discuss them.

I’m open for anything, really. We could take a summer break (or winter break for our southern hemisphere members), or we could concentrate on non-Kurosawa films while waiting for the box set.

I agree with NoelCT. With a decent box set coming out shortly, there’s not much point in discussing these films now when most of us can’t get decent versions to watch. I put Sanshiro Sugata on my Netflix queue, but can’t even get it from them, probably because there’s no Region 2 DVD available. Why not concentrate on non-Kurosawa films while waiting for the box set and then pick up from there, either going back to Sanshiro Sugata or, since there was some discussion about that one, picking up with The Most Beautiful.

Ok, let’s do that — we’ll restart the film club in September. Here’s my new proposal for the schedule.

Thanks – I can’t keep the regions straight. And thanks for taking a pause. Besides the lack of a region 1 DVD until the Criterion collection is issued, it doesn’t seem like a lot of people are around, either.