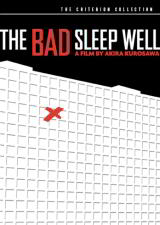 Welcome to the AK Online Film Club edition #16. There are at least two things to get excited about this month. One, of course, is the film itself, The Bad Sleep Well, which is exciting in its own right, and often overlooked by casual film fans. The other matter to get enormously excited about is the fact that this month’s edition, being the 16th in our series of Akira Kurosawa discussions, marks the passing of the half-way point in our quest to cover all 30 of the films in the Kurosawa canon.

The Bad Sleep Well (1960) is important also in that it was the first film released by the newly formed Kurosawa Production Co., which Kurosawa had founded in April 1959. Although Toho continued to co-produce Kurosawa’s works and also retained a majority stake in Kurosawa’s new company, the fact that the director was now putting some of his own money into the productions reportedly gave him more artistic freedom to play with from the production point of view.

As is typical of Kurosawa’s scripts, the writing of The Bad Sleep Well was a true group effort, as no less than six individuals were involved in shaping the narrative. The basic story was suggested by an original script by Kurosawa’s nephew Mike Inoue, who had never before had and would never since have his stories filmed, but who would later go on to co-produce Dreams and Rhapsody in August. Although the overall story of the original script was kept, Kurosawa set out to refine it, reworking it initially with Eijiro Hisaita, who had previously worked with Kurosawa on two films, No Regrets for Our Youth (1946) and The Idiot (1951), and who would three years later also contribute to High and Low (1963). Three other writers joined them later, all Kurosawa regulars: Hideo Oguni (16 works with Kurosawa), Ryuzo Kikushima (ten Kurosawa collaborations) and Shinobu Hashimoto (nine time Kurosawa contributor).

Perhaps partly because of the number of collaborators in the project, the resulting film is fairly complex, and there is much in it to discuss. Yet, one can perhaps pinpoint three topics which film critics tend to tackle most in their treatments of the film.

The first of these is the overall purpose of the movie, which in Kurosawa’s own words set out to “do something about corruption, because it has always seemed to me that graft, bribery, etc., at the public level, is one of the worst crimes that there is. These people hide behind the facade of some great company or corporation and consequently no one knows how dreadful they really are, what awful things they do. Exposing them was, I thought, a socially significant act — and so I started the film.” (Richie, 140). Parallels have been drawn with Scandal, another Kurosawa film which is fairly unapologetic in the directness of its attack on what Kurosawa sees as an important social problem. Ikiru and High and Low are, of course, other films often mentioned in connection with The Bad Sleep Well.

Yet, even with his newly formed production company and the seemingly direct attack on the powers that be, it cannot be said that Kurosawa had freedom to press his point exactly the way he had wanted. There were several compromises, and most famously the chilling last scene which reveals us the story’s corruption going far deeper in society than initially suggested had to be compromised, as producers were unwilling to allow any more obvious connection to the status quo of contemporary Japan (see for instance Cardullo, 115). In 1986, Kurosawa suggested that the reason why the film had never by that time been re-released in Japan was that Toho was still unwilling to deal with the sensitive subject matter (Cardullo, 141).

The second point that is usually included in discussions of The Bad Sleep Well is the film’s somewhat uneven quality. Much praise has been directed towards the first act, or the initial 25 minutes, which indeed constitute what is among the best openings of any Kurosawa film. At the same time, however, the rest of the film is often seen as either being overshadowed by this brilliant opening, or often simply somewhat under Kurosawa’s standards.

The third topic usually raised is the film’s connection with Shakespeare’s Hamlet. While Kurosawa himself never at least in print acknowledged the play as an influence on The Bad Sleep Well, many have seen connections between Kurosawa’s film and Shakespeare’s play. This, I am sure, will turn out to be one of our discussion topics as well.

As always, the floor is now yours. While the above-mentioned three points are perhaps the most discussed elements of the film, there is obviously far more The Bad Sleep Well. Head to the Kurosawa forums and let us know your interpretation(s) of the film!