AK Online Film Club #15: Record of a Living Being 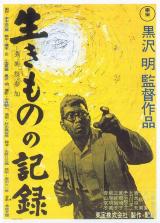 July’s edition of Akira Kurosawa Film Club features Record of a Living Being, which in the English speaking world has also been released as I Live in Fear.

Filmed over six weeks in 1955 and released between Seven Samurai and Throne of Blood, Record of a Living Being is perhaps the least well known of Kurosawa’s works from the 1950s. This does not, however, mean that the film is of any lesser quality, and reasons for the film’s relative obscurity probably have more to do with its subject matter, threat of nuclear annihilation, as well as its somewhat late availability outside of Japan.

Record of a Living Being was released at a time when the issues raised by the film may have been too topical for the Japanese audience. The bombings of Hiroshima and Nagasaki had taken place 10 years earlier, while the Korean war had only just ended, reminding people of the delicate balance between the world’s two nuclear superpowers. A year before its release, the first Hydrogen bombs had been tested, and Japan was limiting its fish consumption due to the increasing number of nuclear tests being carried out in the Pacific.

Despite positive reviews in Japan, Record of a Living Being was the first Kurosawa movie to lose money (Galbraith 223), as audiences were uninterested in tackling the film’s heavy subject matter directly, opting instead for more metaphorical ways of approaching the topic, such as Ishiro Honda’s 1954 film Godzilla. Meanwhile, western film fans had to wait until the 1960s to even see the film, as Record of a Living Being was first shown in Europe in 1961, and in the US two years later. Once screened to western audiences, the film garnered predominantly positive reviews (Galbraith 221-222), although the limited releases – possibly again the result of the film’s topic – did little to establish it a place among Seven Samurai and Ikiru within the Kurosawa canon.

Although originally intended as a satire (Richie 109), something that Stanley Kubrick would accomplish ten years later with Dr. Strangelove, the finished product is a far more somber look at one man’s paralysing fear of the atomic bomb. In its treatment of the subject, the film, like its protagonist, is fairly uncompromising, and its rough edges are left unpolished. So much so that Kurosawa himself has in fact expressed the concern that Record of a Living Being came out somewhat incoherent, even chaotic at times. (Richie 109)

As always with Kurosawa, the film is of course more than simply a story about a man terrified about the bomb, more even than a straightforward exploration of the fears, uncertainties and anxieties surrounding a global catastrophe. Into its narrative is embroidered a range of related themes such as the subjectivity and (ir)irrationality of sanity and madness, family (once again suggesting that the typical critique of Kurosawa as a director uninterested in the family unit may be somewhat too harsh), and the question what, if anything, an individual can do for his survival in the face of a global catastrophe, in a world where the fear itself has been adapted as a natural part of one’s everyday life. All these topics are handled with Kurosawa’s typical humanism in an attempt at the concretisation of an abstract, yet ultimately very real and present concern. Both Richie and Prince have made the point that, as Prince puts it, the “film is split between its two voices, the social and the psychological, and while wishing to speak in the former, it never fully relinquishes the latter.” (Prince 160)

In many ways, Record of a Living Being is actually a fairly typical Kurosawa film, not least because of its strong use of weather (scorching heat, later rain) as a metaphor. It is most often paired with Rhapsody in August for their shared subject matter, and Ran because of the King Lear like main characters of both films. In fact, Toshiro Mifune’s performance as Nakajima, the Lear of Record of a Living Being, is one to challenge the brilliance of Tatsuya Nakadai’s 1985 whirlwind performance in Ran.

In technical terms, Record of a Living Being is characterised by its documentary style, in some ways similar to Kurosawa’s later High and Low. The film also marked the first time that Kurosawa systematically employed his later trademark multi-camera shooting, something that he had experimented with in the battle scenes of Seven Samurai. (Yoshimoto 246) Despite this, Yoshimoto notes that the film is somewhat uncharacteristic of Kurosawa due to its stillness, as not much movement is present, and the sparsity of the music works only to amplify this feeling.

As for music, a personal and professional tragedy struck Kurosawa three days before the filming of Record of a Living Being wrapped. The film’s composer, Kurosawa’s long-term friend and important collaborator Fumio Hayasaka passed away after a long battle with tuberculosis. News of Hayasaka’s death had a big impact on Kurosawa, and he has admitted that the scenes which remained to be filmed – those after the fire in the foundry, as well as the ending – were negatively affected by his grief and lack of proper strength to carry on with filming. (Richie 112) Hayasaka’s death at the end of Record of a Living Being was especially poignant, considering that the composer himself had suggested the film’s topic to Kurosawa in the first place. (Galbraith 220)

The film’s score was ultimately finished by Hayasaka’s assistant Masaru Sato, who would move on to score all of Kurosawa’s subsequent films up until Red Beard, as well as providing the score for the 1999 homage film Ame Agaru. As a piece of trivia, it could be mentioned that Sato also scored three Kurosawa remakes in his career: the 1965 Sanshiro Sugata, 1973 Stray Dog, and a 1964 version of the Kurosawa penned film Jakoman and Tetsu (originally directed by Senkichi Taniguchi).

The forums are now open for discussion, not that they are ever closed. What is your take on Record of a Living Being? Is its message and topic still relevant today? How does the film in your view compare with other movies dealing with nuclear holocaust, or large scale catastrophes in general? What have Kurosawa critics overlooked, and what have they put a false emphasis on?

Never knew that. I love the original but I would be interesting to see the remake to see how it compares. Have you seen it?

Ryan, I unfortunately haven’t been able to locate a copy. It is possible, even probable, that no home video print was ever made.

Galbraith’s filmography notes that the film was subtitled and released in the US in March 1974, so there could still be a subtitled version in a vault somewhere.

There is also a 1966 film with the same title, but there is even less information available about that one. Since Galbraith doesn’t mention it, it may well be unrelated to Kurosawa.