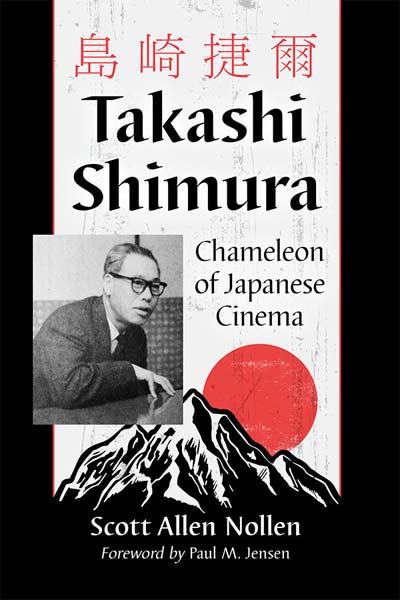 When it comes to books about Japanese cinema, we have plenty of works that discuss the overall history, specific eras, and of course individual directors like Akira Kurosawa. But books about Japanese actors are uncommon, indeed almost non-existent in the English language.

This year, the situation has been corrected slightly with the publication of Takashi Shimura: Chameleon of Japanese Cinema, written by the veteran film historian and author Scott Allen Nollen. The book’s subject, Takashi Shimura, is one of the best known Japanese actors of all time, and the actor that Akira Kurosawa worked with most often. For many, Shimura’s face is instantly recognisable as that of the dying bureaucrat in Ikiru, the wise samurai in Seven Samurai, or the scientist in Ishirō Honda’s Godzilla. Scott Allen Nollen’s book is the first English language account of Shimura’s life and works. It was published by the academic publisher McFarland who were also kind enough to send me a review copy.

Although Shimura appeared in almost three hundred films, working with directors like Kurosawa, Honda, Masaki Kobayashi, Kenji Mizoguchi and Hiroshi Inagaki during a career spanning over half a century, Chameleon of Japanese Cinema is not a particularly thick book. It runs for 285 pages, of which the main content is 164 pages, with the rest devoted to an extensive filmography section that lists all known films that Shimura worked on, as well as notes and a fairly good index.

Despite carrying his name, this is not actually a book about Takashi Shimura, the person. It contains practically no information about what type of a man Shimura was, how he lived, what he thought about things, or what his relationships with other people were like. There is practically nothing about him as a private person in this book.

To illustrate, at one point the book mentions that Shimura took a year off from acting in 1970, yet chooses to offer no information about why he did so or what he was doing that year. Instead, the book goes on to discuss Akira Kurosawa’s Dodesukaden, a film that Shimura had no part in. Meanwhile, towards the end, Shimura’s illness is mentioned (“Shimura was quite ill”) but in no way explained — instead, the book tells us the basic plotline of the film Ogin-sama that Shimura was acting in, his illness only a minor concern for the book, with its focus squarely on the film production. This is how the book operates throughout.

As a result, Takashi Shimura: Chameleon of Japanese Cinema is not a biography. It is much more like a filmography. But it is not really a book about Shimura as an actor, either. Instead, it is a general discussion of some of the films that the actor appeared in, with Shimura the loosely connecting link between them. At one point while reading, I began to wonder if the name of Akira Kurosawa actually appears in the book more often than does Shimura’s. The situation was somewhat corrected by later chapters devoted on the Godzilla films, although by no means due to the book in any way focusing more on Shimura.

So, Shimura is never at the forefront. You don’t get to know him. You don’t learn much about him, other than what films he appeared in and what his roles were like. The titular “Takashi Shimura” remains largely absent and unknown, while the subtitle “Chameleon of Japanese Cinema” feels similarly unexplored, with the reader getting to know very little about the actorsS working methods.

Perhaps something like “Films Through Takashi Shimura” would have been a more fitting title. From that perspective, the book is quite all right. It gives some fairly good overviews of Shimura’s films with Kurosawa, as well as introductions to some of the Godzilla films and a handful of others. But if you have already read any other books on these films, there is very little new here for you. Of the close to three hundred films that Shimura appeared in, no more than two dozen or so are discussed in detail.

What it does, Chameleon of Japanese Cinema does quite well. It is well written. If you are looking for an overview of the historically most important films that Takashi Shimura appeared in, this book can certainly help you with that information. But for any other purposes, it is difficult to recommend. It is not a bad book as such, but it is quite disappointing. To be honest, I’m not entirely sure who it is aimed for.

Takashi Shimura: Chameleon of Japanese Cinema is available directly through the publisher, as well as from other online stores such as Amazon.com and Amazon.co.uk.

This book struck me as a very noble idea handled with extremely lackadaisical execution. It wasn’t very well organized, and as you alluded to, seemed more like a book about Shimura’s collaborations with Kurosawa than anything else, with too much emphasis placed on Kurosawa and not nearly enough insight into Shimura. The last part of the biography section (i.e., Shimura’s post-’60s career) was pretty tiring to read, as the author seemed more content to tell us whether the movies were shot in TohoScope or ToieiScope [sic] as opposed to articulating their content or even what Shimura brought to his roles in these films. I feel that unless there are specific insights on the matter, mini-paragraph listings of things like co-stars and aspect ratios belongs in the filmography section, not in the main content of the book.

And there were too many factual errors and sloppy mistakes for my liking, such as noting that Ryunosuke Akutagawa died by his own hand in 1927 and later crediting him for co-writing the screenplay for 1952’s “Beauty and the Thiefs” (the film was based on the late author’s novel, with director Keigo Kimura writing the script himself). The “Godzilla” chapter, in particular, was a mess, with erroneous claims such as calling it the most expensive Japanese film ever made (it wasn’t even one of the two most expensive films Toho made that year) and asserting that 1954 was a prestigious year for Toho because they released “Godzilla,” “Seven Samurai,” and Kinugasa’s “Gate of Hell” all at that time. Not only was “Gate of Hell” not released the same year as the other two films (it came out in 1953), its acclaim would’ve meant nothing to Toho since it was produced by rival studio Daiei.

Citations was also an issue. At one point, the author states Shimura had a deleted scene in Mizoguchi’s THE LIFE OF OHARU and says he knows this due to “a number of references” — and yet he doesn’t list a single one to back up his claim. Given the substantial peppering of errors throughout the book, it’s a little hard for me to just take the book’s word on matters like this.

As mentioned at the top, a noble idea for a book, not handled in the most thorough or engaging manner. From what I understand, the author is currently working on a tome about Setsuko Hara. Here’s hoping he antes up his game for that one, is a little more thorough, offers more substantial insights, and double-checks his research.

These are very good points, Patrick. The book could have done with a better and/or more engaged editor.

While the Godzilla errors went totally by me, there were a handful that I noticed on the Kurosawa chapters. Mostly half-truths repeated elsewhere and therefore part of the lore, but also some that could have been pretty easy to check and correct, like for instance the Japanese title of The Men Who Tread on the Tiger’s Tail, which the book spells as Toro no o fumu otoko-tachi that contains not one, but two glaring errors. Still a small mistake perhaps, but considering that it’s the title of a chapter that gets repeated at the top of the page, you would imagine that more attention had been paid. The book is also very inconsistent when it comes to the capitalisation of Japanese titles.

I wasn’t aware of the Setsuko Hara biography that the author is writing. Here’s hoping that it’s better proofed and developed!

Thanks to you both for the very informative reviews. I greatly admire Shimura as an actor, and apparently, just about everyone he worked with admired him both as a performer and a person. (He was very close friends with Toshiro Mifune, although they were, in a sense, rivals in the Kurosawa team.) I would have been tempted to get this book if you had not pointed out how weak it is. I may borrow it from the library for the filmography, but for that reason alone.

This is very disappointing, as I’d love to read a good biography of Shimura.

By chance, I was reading another review of a completely unconnected book yesterday, the book seemingly having similar problems – good choice of topic, but poor focus, terrible editing and fact checking. It does seem an increasing problem in todays publishing world – lots of books shoved out on the basis of a title that’s perceived to meet a market segment, with little attention to quality. It seems to be an industry issue more than the fault of the authors.

My first exposure to Takashi Shimura was in 1965 when I saw both Seven Samurai and Rashomon at the University of Kansas. I was a Kurosawa fan ever since, and was particularly interested in both Toshiro Mifune and Shimura, along with several other Kurosawa regulars. I have a library with everything I could find of Kuroswa and DVDs of all his available films as well as a collection of 225 other Japanese films on DVD, many from the “golden age” of Japanese cinema,

The book filled in a lot about Shimura I hadn’t known but not nearly enough. As a previous reviewer said, the book is not so much about the man but about his accomplishments in film. Shimura himself remains something of a mystery. 40% of the book is taken up with Shimura’s filmography listing lots and lots of names of credits and caste but saying nothing about the film itself. For that you have to dig through 13 short chapters. His lesser known non-Kurosawa films are only touched upon.

I’m grateful to have this book but I feel it could have been much more than it is. Even another dozen or so pages about Shimura himself and another sentence or two about each of his non-Kurosawa films would have been much better. It reads a bit like a dissertation on a Japanese actor named Takashi Shimura and this was the result somewhat edited for publication.