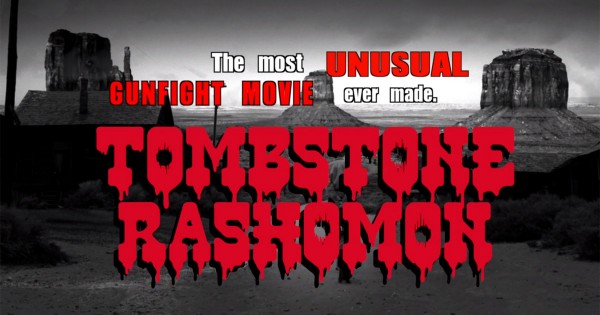 Director, author, actor and one time Akira Kurosawa documentary maker Alex Cox has launched an Indiegogo campaign to crowdfund a film which mixes Kurosawa’s Rashomon with the wild west.

Called Tombstone Rashomon and based on the historical incident of the gunflight at the O.K. Corral, Cox intends to present the story through various conflicting points of view, rejecting the kind of good vs. evil narrative which previous films depicting the gunfight have held onto. But why do I tell you this when you should really just listen to the man himself:

The often quite idiosyncratic Cox was the first director to put together an (unusually non-idiosyncratic) Akira Kurosawa documentary after the director’s death in 1998. He is probably best known for his early film Repo Man and has in recent years concentrated on what he calls “microfilms”, referring to quickly made low budget features.

The Tombstone Rashomon team is seeking $200,000 for the production. To learn more and potentially contribute to getting the film made, check out the project’s Indiegogo page.

A bit more on it in the Guardian.

http://ijpr.org/post/ok-corral-several-views#stream/0
The film is finished and here is an interesting radio interview with Alex Cox that references Kurosawa etc.
I received my Blu-ray copy recently and watched the film last night . I was really impressed with the script and dialogue, very well written and using the Rashomon interview technique for the witnesses and participants worked well for me . The film was shot on a very low budget but still seemed to look pretty good .
There were some interesting Alex Cox quirks and techniques used which might confuse some viewers but overall I felt the script and dialogue carried it through and it’s well worth a watch , especially for Kurosawa fans.

Thanks for the followup, Longstone! I had completely forgotten about this. Do you know if or when the film will be available for streaming or digital rental?

I can’t find any information about a digital release , there was a trailer online but that seems to have been taken down . However I think the film is only just showing now at some film festivals so maybe they are still looking for distribution deals ? I received the disc because I ordered during the crowd funding. I’ll come back with more information if I find it.

There is a trailer on line now here
https://www.youtube.com/watch?v=6w_cd94noGA

The film can now be streamed here apparently ,
https://www.fandor.com/films/tombstone_rashomon?panel_position=1&panel_size=large&row_name=New+Releases&row_style=large-and-small-row

I haven’t tried it and am not sure which countries it will work in though.
The crowdfunding site sent out the link .

Thanks for the link, Longstone! After seeing last year’s trailer, I must say my interest in this dropped quite dramatically. 🙂