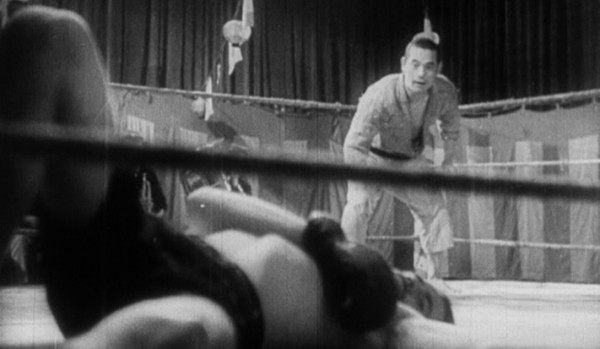 Following the box office success of Sanshiro Sugata, the film studio Toho wanted more of the same, and as an up-and-coming director who needed his studio’s backing Kurosawa was not yet in a place to deny them. Yet, as so often when confronted with something he was not entirely happy with, Kurosawa appears to have decided to follow the assignment literally. In many ways, Sanshiro Sugata Part II is a retrace of the original film, at times almost an unintentional parody of it, tracing through the same characters, motifs and setups, but without the passion or the care of the first film. Donald Richie has aptly summed up the situation by writing that “in it we have what the original Sugata might have been had an ordinary director done it.”

Made towards the end of the Second World War, Sanshiro Sugata Part II is at times also blatantly propagandist, as displayed in the scene illustrated above, where the protagonist defeats an American boxer. As part of Kuroaswa’s oeuvre, the film is not entirely without merit as it continued the director’s development, featuring among other things his first axial cuts and the first instance of Kurosawa appropriating Noh influences into his films. But even then, the story and the visuals as a whole are untypically bland for Kurosawa and devoid of real artistic expression. Richie, again, sums it up best: “it is an entertainment film — quite different from an entertaining film”.

For home video availability, check out the section on Kurosawa DVDs.

The only thing that I liked about this film were the two crazy brothers. There was something very video-gamey about them – like they were mini-bosses – in a time long before video games.

I watched Wilson Yip’s Ip Man 2 – a supposed biopic despite hardly anything in the film having taken part in real life – a while back. It has a similarly propagandistic scene between Ip Man and an arrogant English boxer. I wondered if Yip wasn’t inspired by Sanshiro Sugata 2.