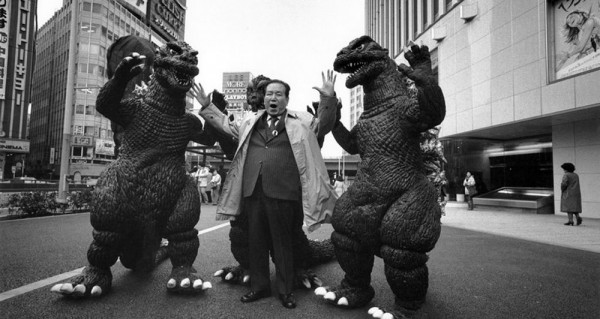 Exactly 105 years ago today, on April 26, 1910, one of Japan’s most famous film producers Tomoyuki Tanaka (1910-1997) was born in Osaka. He is most famous for having been the producer of the Godzilla films as well as for his work with Akira Kurosawa.

Tanaka acquired a university degree in economics before joining the story department of Toho Studios in 1940. Five years later in 1945 he became a producer at the studio, starting a production career which span over five decades and during which he produced over 200 feature films. Tanaka was not only a very prolific but also an enormously successful producer and he was made the president of Toho Studios in 1975, a post he held until 1989 when he took the role of the Chairman of the company’s Board of Directors, in which capacity he remained at the company until 1995.

With Toho the primary home of both Tanaka and Kurosawa, it is no surprise that the paths of the two legends crossed frequently. The first time that the two men worked together was the 1946 film Those Who Make Tomorrow, for which Kurosawa begrudgingly directed a segment. The next time their names appeared together was a year later in the Senkichi Taniguchi directed Snow Trail, a film which Kurosawa and Taniguchi wrote and which introduced the world to a brand new acting talent called Toshirō Mifune.

Despite his long career and association with Kurosawa, Tanaka is probably most famous for the Godzilla series, which he developed together with director Ishirō Honda and special effects wizard Eiji Tsubaraya. Tanaka produced altogether 22 titles in the Godzilla series, as well as working as a producer on a number of other similarly themed popular science fiction and action films.

Tanaka passed away in 1997 in Tokyo after suffering a stroke at the age of 86. He was was married to actress Chieko Nakakita (1926-2005), who also had a strong Kurosawa connection, appearing in altogether five of the director’s films, most notably starring opposite Isao Numasaki in One Wonderful Sunday (1947).