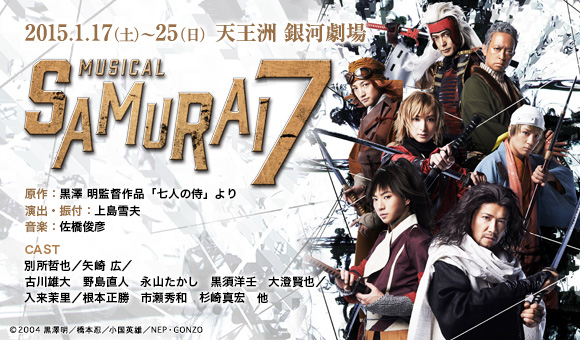 The new Samurai 7 stage musical has its opening night later today at the Galaxy Theatre in Tokyo.

The musical is based on the 2004 anime series, which was adapted from Akira Kurosawa’s Seven Samurai and transported its feudal story into a futuristic steam punk setting. The nine day initial run at the theatre is scheduled to end on January 25. The show is directed and choreographed by Yukio Ueshima, with Toshihiko Sahashi composing the music. Both have previous experience with adapting animated films for the musical stage.

Although this is the first time Samurai 7 will be performed as a musical, it is not the first stage adaptation based on the property. The story was adapted into a spoken drama that premiered at Tokyo’s Shinjuku Koma Theatre in 2008, and has since been performed also at Aoyama Theatre in Tokyo in 2010 and 2012.

For the musical’s official website (in Japanese), see nelke.co.jp. For pictures of rehearsals and other behind-the-scenes action, check out the musical’s official Twitter account. For a detailed look into the anime series, see here. The series is also mentioned on the page Remakes and Films Influenced by Kurosawa’s Works.

So, are you going? Or, given the chance, would you go?

And while we are at it, which Kurosawa film would in your opinion be the best basis for a Broadway musical?

The animeanime.jp reviewer (in Japanese) seems to have liked the Samurai 7 musical.

To answer my own question from above: while Rashomon would probably be the most obvious choice, I think One Wonderful Sunday could actually work really well as a musical. Well, as far as musicals go, anyway. The film even sort of ends in a musical number.