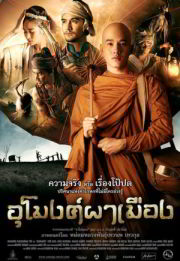 At the Gate of the Ghost (U mong pa meung, also known in English as The Outrage) is a Thai film which originally screened in 2011 and which received its western release in the United States last month when it became available on both dvd and blu-ray. As it is a remake of Akira Kurosawa’s Rashomon, I decided to take a closer look. What follows here is my review.

The first thing to note is that At the Gate of the Ghost is a fairly direct remake, especially when compared to the last two Rashomon related films that I have reviewed, Tajomaru and Vantage Point, which were merely inspired by it. By and large At the Gate of the Ghost follows Kurosawa’s original: three characters in the woods, a rape and murder take place, but who did what and why? The setting this time around is Thailand in 1567, and the film is presented with a visual style that reminds one of such Asian films as Crouching Tiger, Hidden Dragon and House of Flying Daggers.

However, it is also possible to call At the Gate of the Ghost an indirect remake. It is clear that somewhere along the way someone was familiar with either the American stage adaptation written by Fay and Michael Kanin, or with Martin Ritt‘s western film The Outrage, which was based on Kanins’ play. This someone could be either the Thai filmmakers or the Thai playwright Kukrit Pramoj on whose play At the Gate of the Ghost is directly based. Although the Kanins are not actually credited as a source for the Thai film (then again, they didn’t originally credit Kurosawa or Hashimoto themselves), especially the wife’s story and the woodcutter’s final story in At the Gate of the Ghost betrays the American influence. Both of these sections incorporate the additions written into the story by the Kanins, which appear in neither Kurosawa nor Akutagawa.

In case you are not fully familiar with the history behind Rashomon and the above has left you a little confused about who did what, here is a quick recap of what the sequence of intertextual influences behind At the Gate of the Ghost appear to have been: “In the grove” and “Rashomon” (1922 and 1915 short stories by Ryunosuke Akutagawa) were the sources for Rashomon (a 1950 film directed by Akira Kurosawa), which in turn was the primary source for Rashomon (a 1959 play by Fay and Michael Kanin) that later got turned into The Outrage (a 1964 film directed by Martin Ritt), and either it or the play or Kurosawa’s film functioned as the source for Rashomon (a 1973 play by Kukrit Pramoj), which in turn was the direct source (either with or without the American film or play) for At the Gate of the Ghost (the 2011 film that I am reviewing here). It is a little complicated, but I think still more straightforward than the actual story that these works depict.

Yet, for a viewer familiar with all the major Rashomon adaptations that have been released over the years, it is fortunate that At the Gate of the Ghost is not content simply to restage the events in embellished 16th century Thailand, but also attempts to build on what has gone before.

We see the execution of the bandit at the beginning.

The major addition in the Thai version is back story. The film suggests a reason why the bandit impulsively wanted to have the wife (a childhood encounter with a similar woman) and also builds a fairly extensive history for the priest character, whose struggle to understand the events and to come to terms with his faith are very much at the forefront. The husband and wife’s back story is also visually narrated.

Yet, it is questionable whether any of these additions are actually necessary. The priest in particular, despite his added background and the film’s use of Buddhist teachings, ultimately gains very little, and is in fact a weaker character than in Kurosawa’s version, where we know practically nothing about him or his background.

From the couple’s back story.

A similar argument can be made of the film’s style. Although the film is often very beautiful shot and its audio track is more than competently built, the work’s stylised nature takes away from the seriousness of the topic. Unlike in Kurosawa’s Rashomon, where the story is served with a documentary style immediacy, the story of At the Gate of the Ghost remains distant, fable-like. Similarly, despite its rich style, At the Gate of the Ghost lacks the actual visual brilliance of Kurosawa’s work.

Where there are butterflies there is beauty.

Perhaps the most uneven aspect of the film is its acting. The commoner, here some kind of a cave dwelling undertaker, is a particularly bad performance, although a large part of the problem is his make-up, which is needlessly distracting and disgusting. The other major problem is the total miscasting of the bandit, whose acting skills seem all right, but who would be far more suitable in a less commanding role. The film’s claim of him being a famous bandit terrorising the area is impossible to swallow.

The Medium steals the show, as always.

Ultimately, At the Gate of the Ghost is a capable remake, but one that is unable to innovate and add to the story in a new and meaningful way. While at times very beautifully put together, it suffers from uneven performances and largely unnecessary narrative additions. As a result, it is not necessary viewing solely for its Kurosawa connection. On the other hand, At the Gate of the Ghost is nevertheless a perfectly passable film for anyone wanting to travel through familiar paths while enjoying a stylised Asian movie.

At the Gate of the Ghost is available with English subtitles in both on DVD and Blu-ray. As always, I link here to Amazon, which stocks the film both in the Blu-ray and DVD versions. Do note that these are American versions, and at the time of writing there are no English friendly releases in other regions.

Tagged with at the gate of the ghost, rashomon, remake, review