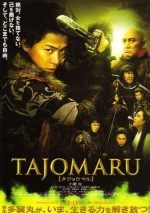 There is this genre of films that are so bad that, when watched together with a group of people, they become almost perfect entertainment, allowing you to constantly point at things on the screen and laugh until your stomachs hurt. Tajomaru (2009) is one of those films, and as such a brilliant cinematic present to any group wanting to have a good time on a Friday evening.

It is consequently rather unfortunate that I had to suffer through the more than two hour long feature all on my own. And it wasn’t even Friday.

It is difficult to describe Tajomaru. I would love to present you with a full plot-outline, but I doubt that anyone could really follow it, as the film has more twists and turns than a Swiss alpine road on steroids. If I had to sum it up in just one sentence, I would say that Tajomaru is pretty much like a 20-year-old’s attempt at making a “cool” film with 15-year-old actors for an audience of 10-year-olds who all have the attention span of a 5-year-old.

The Akira Kurosawa connection, which has to do with the titular Tajomaru, the character from Rashomon, feels like an afterthought that has been glued on; but then again the entire film reeks of that sweet smell of polyvinyl acetate. Basically, the Kurosawa references kick in as the girl and the younger brother are escaping from the wrath of the older brother (who, in turn, is at this point busy getting killed by the foundling guy), and the young couple find themselves in the middle of a thick forest. She’s wearing this big hat, and they have a horse, and he’s got his weapons, and… Well, you get the picture. Especially if I post one: 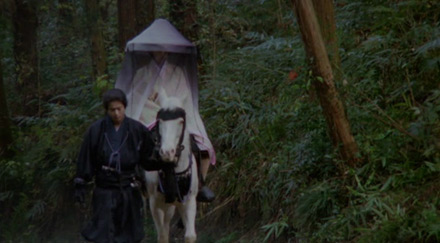 And then, into the scene walks Tajomaru the bandit. 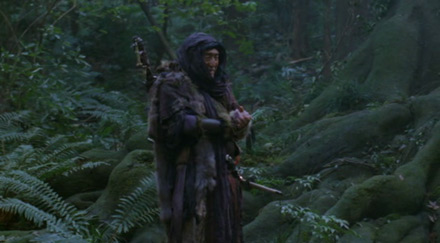 Yeah, not quite a one-to-one resemblance there with Mifune’s take on the character, but that’s all right because it will all be explained. But before that, let me confirm that indeed, the bandit will fight the younger brother, successfully knocking him unconscious, and as the younger brother later gets up, he finds his girl promising herself to the bandit if Tajomaru kills the brother. However, the girl suddenly annoys Tajomaru by calling him a stinking bandit, and so Tajomaru goes to the now conscious younger brother to ask him if he now wants her killed, at which point the girl takes off, after which Tajomaru decides to free the young guy. And then the young guy kills Tajomaru. A bit unexpected that last thing, I know.

This leads to a couple of short adventures with a robinhoodesque group of merry men (well, boys really), and to a rap scene vaguely reminiscent of the singing in The Lower Depths. This is on the soundtrack right between an English language emo song and some techno ambience — the film really tries to have everything for everyone.

Anyway, this isn’t the end of Rashomon references. After a while, the now-Tajomaru (the former younger brother) finds himself captured and tied down for questioning at his former palace. Also the girl is there, and we have by now learned that she is currently living with the foundling guy, who has assumed the family name after killing the older brother, and is therefore running the household. The girl is also tied up for questioning. There is also one of the merry men — one who looks a bit like Slash from Guns n’ Roses (on the right in the picture below). 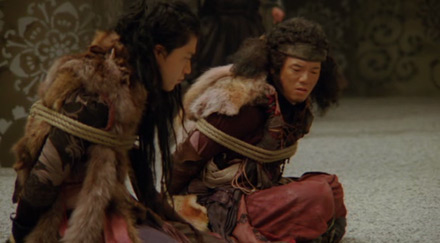 Why the Slash character is important here is because after the now-Tajomaru relates the events that took place in the forest, the Slash guy comes forward and says nope, that ain’t what happened. And he knows it because he was there, hiding behind a tree, and then we get *gasp!* another point of view! And it goes like this: since the girl had been raped by the older brother (this was at the beginning of the film), she feels that she is no longer good enough for the younger brother, and so she and the suddenly very-understanding bandit Tajomaru (the original one, who later got killed, remember, and who hasn’t raped her), together come up with a plan to make the younger brother (who at this point is knocked unconscious, remember) to believe that she wants him killed, because apparently that is the best way to make someone you love stay away from you (solid dating advice right there).

Now, if you — like me — get your hopes up at this point and declare “ah, but that isn’t the last word on what happened in the forest now, is it?”, I’ll better disappoint you right away and tell you that yes, that’s the last word on it, and apparently the Unconditional Truth as well.

After which… well, the young brother realises that it is all a big misunderstanding, we fight a bit, we go to Hell (or something that is called Hell and looks like Hell, but which really rather seems to be a ten foot hole in the ground), we fight some more, people die, in fact most people die, and then the young couple find each other and the younger brother (who still calls himself Tajomaru) hands everything over to some random dude who may or may not have had a short scene at the beginning of the film. And then the couple go away together, while the voice over tells us that freedom is choosing where you go and what you do; although I would really think that it should be easier to go and do whatever you want if you had your family’s inheritance — this theory is actually even supported by the film itself, as it includes a shogun who I must say is incredibly good at suddenly appearing out of nowhere, especially for a blind man of his status — no one expects the Japanese inquisition, do they!?

From the descriptions back when the film was in production, I actually had quite high hopes for this one. Unfortunately, these turned out to be totally unfounded. It was nothing like the brilliant intertextual post-modern character analysis that I had imagined in my mind’s eye. Instead, it was a bunch of 15-year-olds waving rubber swords in a story that makes an average rap music video look both coherent and calming. In conclusion, I would recommend this if you want to laugh at something that wasn’t designed to be laughed at. Otherwise, don’t bother.

Update: There is now a UK DVD release.

I completely forgot about this film, thanks for the review. I got to say, this was perhaps the most entertainingly written review I ever read.

I would say that Tajomaru is pretty much like a 20-year-old’s attempt at making a “cool” film with 15-year-old actors for an audience of 10-year-olds who all have the attention span of a 5-year-old.

Great review! More entertaining than the film I would guess. For all its great films, Japan can produce some real crap.

Does the guy who look like Slash have his pancreas explode? Now that would be worth watching.

Unfortunately, no pancreas exploded while making the film (at least not on-screen). In fact, there is refreshingly little special effects in the film, and like so often even in the worst Japanese films, there are some stunning nature shots. But I’m afraid those still aren’t enough to save Tajomaru.

I just realised that my reference to Slash’s pancreas exploding was not just obscure, it was wrong. It was GnR’s bassist Duff McKagens pancreas that exploded after a drinking binge in the mid 1990’s! Although I’m pretty sure I remember Slash saying it was his in an interview. Maybe they shared a pancreas, I’d not put it past those guys.

Thanks for the review, and yes it was very entertaining(the review)

Apparently, Tajomaru will be released in the UK on January 31 as Tajomaru: Avenging Blade.

Oh you just made my evening Vili…! What a fun read…

Glad you enjoyed it, Amnesty! For some reason, I have recently felt like watching this again. Maybe as a double feature with The Last Princess.

I’m all into Benshis now that I just learned about them! Have spent way too much of my day reading about them… with The Artist’s popularity (and Hugo) and Kurosawa’s evident love for Silent films, I find myself immersed in study…